Capital punishment was practiced in France from the Middle Ages until 1977, when the last execution took place. From the French Revolution onwards the only legal execution method for ordinary crimes was the guillotine. The last person to be executed in France was Hamida Djandoubi, who was put to death in September 1977. The death penalty was abolished in French law in 1981. It is now also forbidden by the French constitution, and by several human rights treaties to which France is a party.

Prior to 1791, under the "Ancien Régime", there existed a variety of means of capital punishment in France, depending on the crime and the status of the condemned person, such as decapitation by sword (reserved for nobles), hanging for thieves, and burning for heretics.

Adoption of the guillotine 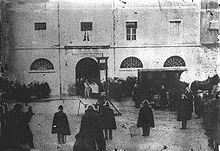 Public execution by guillotine in Lons-le-Saunier, 1897

The first campaign towards the abolition of the death penalty began on 30 May 1791, but on 6 October that year the National Assembly refused to pass a law abolishing the death penalty. However, they did abolish torture, and also declared that there would now be only one method of execution: 'Tout condamné à mort aura la tête tranchée' (Anyone condemned to death will have their head cut off).

The guillotine had been proposed as a means of execution in 1789 by Joseph-Ignace Guillotin. The French Revolution marked the end of hanging by requiring all executions to be accomplished by means of the blade, rather than reserving it only for nobles. However, as beheading by a hand-held axe or blade was a comparatively inefficient and unreliable method of execution compared with hanging, the mechanical guillotine was adopted; it was also regarded as a more humane way to take the life of the condemned than earlier messy ways of execution. The device was first used on Nicolas Jacques Pelletier on 25 April 1792. Guillotine usage then spread to other countries such as Germany (where it had been used since before the revolution), Italy, Sweden (used in a single execution) and French colonies in Africa, French Guyana and French Indochina.

Public executions were the norm and continued until 1939. From the mid 19th century, the usual time of day for executions changed from around 3 pm to morning and then to dawn. Executions had been carried out in large central public spaces such as market squares but gradually moved towards the local prison. In the early 20th century, the guillotine was set up just outside the prison gates. The last person to be publicly guillotined was Eugen Weidmann, who murdered six victims, on 17 June 1939 outside the St-Pierre prison (now part of the Palais de Justice) at Versailles. Photographs of the execution appeared in the press, and apparently this spectacle led the government to stop public executions and to hold them instead in prison courtyards, such as La Santé Prison in Paris. Following the law, the first to be guillotined inside a prison was Jean Dehaene, who had murdered his estranged wife and father-in-law, executed on 19 July 1939 at St-Brieuc.

The 1940s and the wartime period saw an increase in the number of executions, including the first executions of women since the 19th century.

In the 1950s to the 1970s, the number of executions steadily decreased, with for example President Georges Pompidou, between 1969 to 1974, giving clemency to all but three people out of the fifteen sentenced to death. President Valéry Giscard d'Estaing oversaw the last executions.

President Charles de Gaulle, who supported the death penalty, commuted 19 death sentences and during his term of office 13 people were guillotined, and a few others executed by firing squad for crimes against the security of the state (the last of those was OAS member, Lt. Colonel Jean-Marie Bastien-Thiry, who was an organizer of the famous assassination attempt on de Gaulle in 1962).

Georges Rapin, guillotined in 1960, originally had his sentence commuted by de Gaulle. However, he refused a pardon and was executed.

There were no executions during two terms of Interim President Alain Poher in 1969 and 1974.

President Georges Pompidou, who personally was a death penalty opponent, commuted all but three death sentences imposed during his term.

President Valéry Giscard d'Estaing, who, according to his own words, "felt a deep aversion to the death penalty", also commuted all but three death sentences. He was President at the time of the last execution in France.

One of the examples of general amnesty for all people sentenced to death and awaiting execution took place in 1959 when, after de Gaulle's inauguration, all sentences were commuted[2] (amnesty is not an executive clemency, rather it is an act of parliament).

The first official debate on the death penalty in France took place on 30 May 1791, with the presentation of a bill aimed at abolishing it. The advocate was Louis-Michel Lepeletier of Saint-Fargeau and the bill was supported by Maximilien de Robespierre. However, the National Constituent Assembly, on 6 October 1791, refused to abolish the death penalty.

On 26 October 1795, the National Convention abolished capital punishment, but only to signify the day of general peace. With the arrival of Napoleon Bonaparte, the death penalty was reinstated on 12 February 1810, in the French Imperial Penal Code.

The President of the Republic Armand Fallières, a supporter of abolition, continued to systematically pardon every convict condemned to death over the first three years of his seven-year office.

In 1906 the Commission of the budget of the Chamber of Deputies voted for withdrawing funding for the guillotine, with the aim of stopping the execution procedure. On 3 July 1908 the Garde des Sceaux, Aristide Briand, submitted a draft law to the Deputies, dated November 1906, on the abolition of the death penalty, but, despite the support of Jean Jaurès, the bill was rejected on 8 December by 330 votes to 201.

Under the Vichy Regime, Marshal Pétain refused to pardon five women due to be guillotined (something that had not occurred for more than 50 years). Pétain himself was sentenced to death following the overthrow of the Vichy Regime, but General Charles de Gaulle commuted Pétain's sentence to life imprisonment on the grounds of poor health. Other Vichy officials, including notably Pierre Laval, were shot. Under Vincent Auriol's presidency, three more women were beheaded, one in Algeria, two in France, the last one in Angers, 1949.

With defence by Robert Badinter, Patrick Henry escaped being condemned to death on 21 January 1977 for the murder of a child. Numerous newspapers predicted the end of the death penalty. On 10 September 1977, Hamida Djandoubi was guillotined, the last person executed in France.

Robert Badinter, a long time opponent of capital punishment and the defending lawyer of some of the last men to be executed, became minister of justice and proposed the final abolition of the death penalty in 1981, which was pushed through the National Assembly with the backing of newly elected president François Mitterrand.

The abolition process in 1981

Today, although a few French politicians (notably the far-right leader Jean-Marie Le Pen) declare themselves to be in favour of the death penalty, its re-establishment would not be possible without the unilateral French rejection of several international treaties.

On 20 December 1985, France ratified Additional Protocol number 6 to the European Convention to Safeguard Human Rights and fundamental liberties. This means that France can no longer re-establish the death penalty, except in times of war or by denouncing the Convention.

On 21 June 2001, Jacques Chirac sent a letter to the association "Ensemble" saying he was against the death penalty: "It's a fight we have to lead with determination and conviction, Because no justice is infallible and each execution can kill an innocent; because nothing can legitimise the execution of minors or of people suffering from mental deficiencies; because death can never constitute an act of justice".

On 3 May 2002, France and 30 other countries signed Protocol number 13 to the European Convention on Human Rights. This forbids the death penalty in all circumstances, even in times of war. It went into effect on 1 July 2003, after having been ratified by 10 states.

On 19 February 2007, the Congress of France (the National Assembly and the Senate of France, reunited for the day) voted overwhelmingly a modification of the Constitution that states that "no one can be sentenced to the death penalty". There were 828 votes for the modification, and 26 against.

During the twentieth century, French opinion on the death penalty has greatly changed, as many polls have showed large differences from one time to another.

As with all surveys on a subject this sensitive, public opinion is quite changeable, depending on current affairs. The different surveys taken have shown that, at the time of appalling crimes (particularly those that affect children), public opinion can quickly return to a majority in favour of re-establishing capital punishment.