Makin was born in Petersham,[1] a suburb of Sydney, the son of an itinerant worker. He received a primary education in Broken Hill, then moved with his family to Adelaide, where he became a metal-worker. He was active in the Australian Society of Engineers and the Australian Labor Party from an early age. By 1918 he was President of the South Australian branch of the Labor Party. In his private life Makin was a lay Methodist preacher.

In 1919 he was elected to the House of Representatives for the safe Labor seat of Hindmarsh in the working-class suburbs of Adelaide. Makin spent ten years in Opposition before the election of the Scullin Labor government in 1929. He hoped to be elected to Cabinet, but had to be content with the parliamentary position of Speaker, a post in which he performed capably, being noted for his even temperament and his courtesy to all members. In 1932, following the defeat of the Scullin government, he returned to the Opposition benches, and was Secretary of the Labor Caucus during the 1930s.

By 1941, when Labor returned to power under John Curtin, Makin had an undeniable claim to office, and became Minister for the Navy and Minister for Munitions – key posts in a wartime government. In 1945 he also became Minister for Aircraft Production. He established good relations with service chiefs and played an important role in Australia's successful transition to a wartime economy. When Curtin died in 1945, Makin contested the leadership along with Ben Chifley and caretaker Prime Minister Frank Forde, but Chifley succeeded.

In 1946 Chifley appointed Makin as the Australian Ambassador to the United States, a post he held until 1951. In the gathering Cold War atmosphere of the post-war years, this was a position of great importance to Australia, and Makin performed it so well that the incoming Liberal Prime Minister, Robert Menzies, kept him in the post after the change of government in 1949. In 1946 he served as the first President of the United Nations Security Council.

It has subsequently emerged that during his time in the United States, Makin was involved with the secretive neo-conservative religious group now known as The Family. In 1948 he was a key speaker at a meeting of the group and was recorded in a 1949 newsletter as having started up similar groups in Australia.[2]

Return to politics and later life

After leaving his diplomatic post, Makin returned to Australia. Although he was by now in his mid-60s, he decided to return to politics. At the 1954 election he captured the marginal Liberal seat of Sturt for Labor on 53 per cent of the vote,[3] and in 1955 he shifted to the new, safe seat of Bonython. While still a Member of Parliament in 1961 he authored a book with brief biographies of all leaders of the Federal Parliamentary Labor Party until that time.[4] He retired at the 1963 election, and remained active in Labor affairs for many years, dying in Adelaide in 1982 at the age of 93. He was the second-last surviving member of Curtin's Cabinet; Forde outlived him by one year.

Honoured in naming of electoral division

The electorate of Makin, established in 1984 in Adelaide's northeastern suburbs, is named after him.[5] 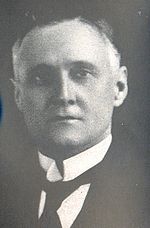 Makin at an older age