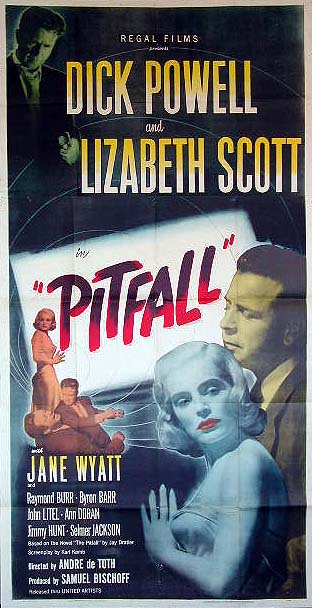 This "noir," set in , tells the story of John Forbes (Powell), a bored man working for an insurance company. The middle-class married man craves excitement in his day-to-day life. He gets his wish when he begins investigating an case and meets model Mona Stevens (Scott).

Forbes is tasked with getting hold of some expensive gifts given to a girlfriend by an embezzler who's serving time in prison. Insurance agent Forbes ends up spending the day on a boat with the sultry blonde, appropriately named "Tempest," and a romance begins brewing.

Forbes, attracted to the blonde, fudges the reports so he won't have to take the boat away from her. The couple finds themselves being stalked and threatened by a jealous, and suspicious, ex-cop (Burr). As the ex-police officer's sadistic obsession grows, and the day of the dangerous prisoner release from prison approaches, Mona fears for her safety and John longs for the days before he got involved in all this trouble. Things finally go too far when he turns to murder.

Film critic Fernando F. Croce wrote about the screenplay and direction, "The title's abyss, pitilessly moral, sprawls horizontally rather than vertically, a lateral track following disheveled Dick Powell bottoming out, wandering the streets after confessing murder and adultery to wife Jane Wyatt. Fate may be at play, yet André de Toth's grip is less determinist than humanist, airtight but wounded, each pawn in the grid allowed trenchant space to deepen the fallout of their own actions." [ [http://www.cinepassion.org/Reviews/p/Pitfall.html Croce, Fernando F] . ""Cinepassion," film review, 2008. Last accessed: .]

Film critic Dennis Schwartz wrote of the film, "Powell is the archetypal average American man living out the in the suburbs, where his type is viewed as the backbone of the country. This film does a good job of poking holes at that dream, showing underneath the surface all is not well. The wayward husband has fallen from his perch of bourgeois respectability in the eyes of his wife, and the materialism needed to maintain such a middle-class lifestyle is shown to be just as superfluous in attaining love as the gifts Smiley tried to bribe his girlfriend with to get her to love him. There was also one scene where Tommy had a nightmare and Powell glibly explains this away because he read a comic book with an alien story before going to sleep. But the nightmare indicates more than that, as it indicates there is something troubling even the youngsters brought up in this so-called ideal materialistic environment." [ [http://www.sover.net/~ozus/pitfall.htm Schwartz, dennis] . "Ozus' World Movie Reviews," film review, . Last accessed: February 24, 2008.]