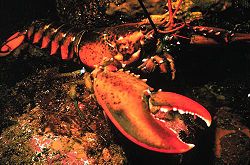 The American lobster, a favorite ingredient in New England cuisine.

New England cuisine is an American cuisine which originated in the northeastern region of the United States known as New England.

It is characterized by extensive use of seafood and dairy products, which results from its historical reliance on its seaports and fishing industry, as well as extensive dairy farming in inland regions. Many of New England's earliest Puritan settlers were from eastern England, where baking foods such as pies, beans, and turkey were more common than frying as was the tradition elsewhere.[1]

Two prominent characteristic foodstuffs native to New England are maple syrup and cranberries. The standard starch is potato. Parsley and sage are common, with a few Caribbean additions like nutmeg. Due to the reliance on dairy, creams are standard. The favored cooking techniques are stewing and baking.

Native American foods and cooking methods such as corn meal johnny cakes, oysters, clam chowder, and clam bakes were adopted by early immigrants to New England. Many of New England's earliest Puritan settlers were from eastern England and also brought with them traditions of dairy products and baking pies and other foods. Baked beans, apple pies, baked turkey, and pease porridge became common Yankee dishes, and some are now common nationally during Thanksgiving dinners.[1]

Many herbs were uncommon, particularly Mediterranean herbs, which are not hardy in much of New England away from the coast. As a result, most New England dishes do not have much strong seasoning, nor are there many particularly spicy staple items.

Even today, traditional cuisine remains a strong part of New England's identity. Some of its plates are now enjoyed by the entire United States, including clam chowder, baked beans, and homemade ice cream. In the past two centuries, New England cooking was strongly influenced and transformed by Irish Americans, the Portuguese fishermen of coastal New England, and Italian Americans.

The oldest operating restaurant in the United States, the Union Oyster House (1826), is located in Boston, Massachusetts.

Connecticut is known for its apizza (particularly the white clam pie), shad and shadbakes, grinders (including the state-based Subway chain), and New Haven's claim as the birthplace of the hamburger sandwich at Louis' Lunch in 1900. Italian-inspired cuisine is dominant in the New Haven area, while southeastern Connecticut relies heavily on the fishing industry. Irish American influences are common in the interior portions of the state, including the Hartford area. Hasty pudding is sometimes found in rural communities, particularly around Thanksgiving.

Maine is known for its lobster. Relatively inexpensive lobster rolls (lobster meat mixed with mayonnaise and other ingredients, served in a grilled hot dog roll) are often available in the summer, particularly on the coast. Northern Maine produces potato crops, second only to Idaho in the U.S. Moxie, America's first mass-produced soft drink and the official state soft drink, is known for its strong aftertaste and is found throughout New England. Although originally from New Jersey, wax-wrapped salt water taffy is a popular item sold in tourist areas. Wild blueberries are a common ingredient or garnish, and blueberry pie (when made with wild Maine blueberries) is the official state dessert. Red snappers — natural casing frankfurters colored bright red — are considered the most popular type of hot dog in Maine. The whoopie pie is the official state treat. Finally, the Italian sandwich is popular in Portland and southern Maine—Portland restaurant Amato's claims to have invented the Italian sandwich (specifically, a submarine sandwich made with ham, cheese, tomato, raw peppers, pickles and cheese, served with or without oil, salt and pepper) in 1902. The city of Portland, Maine with its numerous nationally renowned restaurants such as Fore Street, was ranked as Bon Appétit magazine's "America's Foodiest Small Town" in 2009.[2]

Coastal Massachusetts is known for its clams, haddock, and cranberries, and previously cod. Boston is known for, among other things, baked beans, bulkie rolls, and various pastries. Hot roast beef sandwiches served with a sweet barbecue sauce and usually on an onion roll is popular in Boston's surrounding area. The North Shore area is locally known for its roast beef establishments. Apples are grown commercially throughout the Commonwealth.[3] Because of the landlocked, hilly terrain[4] common plant foods in Massachusetts are similar to those of interior northern New England- including potatoes,[5] maple syrup,[6] and wild blueberries. Dairy production is also prominent in this central and western area.[7] Cuisine in western Massachusetts had similar immigrant influences as the coastal regions, though historically strong Eastern European populations instilled kielbasa and pierogi as common dishes.[8][9]

Southern New Hampshire cuisine is similar to that of the Boston area, featuring fish, shellfish and local apples. As with Maine and Vermont, French-Canadian dishes are popular, including tourtière, which is traditionally served on Christmas Eve, and poutine. Corn chowder, which is similar to clam chowder but with corn and bacon replacing the clams, is also common. Portsmouth is known for its orange cake, often containing cranberries.

Vermont produces Cheddar cheese and other dairy products. It is known in and outside of New England for its maple syrup. Maple syrup is used as an ingredient in some Vermont dishes, including baked beans. Rhubarb pie is a common dessert and has been combined with strawberries in late spring.

New England also has its own food language. In New England, hot and cold sandwiches in elongated rolls are called subs or grinders, and in still some sections of Greater Boston as Spukkies. This is opposed to the appellations hoagies or heroes in other sections of the country. Sub is short for submarine sandwich, for which Boston, Massachusetts is one of three main claimants for inventing.[12] In Maine, the Italian sandwich—a variation specifically made up of ham or salami, cheese, peppers, pickles, tomatoes and optional oil—is popular, though usually kept distinct from other subs.

New England hot dog rolls are split on top instead of on the side.