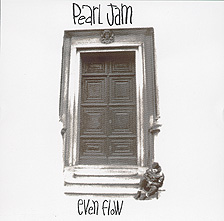 "Even Flow" is a song by the American rock band , released in 1992 as the second single from the band's debut album, "Ten" (1991). The song peaked at number three on the "Billboard" Mainstream Rock Tracks chart.

Guitarist on the song:

That's me pretending to be , and a feeble attempt at that. Stone (Gossard, Pearl Jam guitarist) wrote the riff and song; I think it's a D tuning. I just followed him in a regular pattern. I tried to steal everything I know from Stevie Ray Vaughan and put it into that song. A blatant rip-off. A tribute rip-off, if you will! [Gilbert, Jeff. [http://www.fivehorizons.com/archive/articles/gs0595.shtml "Prime Cuts: Mike McCready - The Best of Pearl Jam!"] . "Guitar School". May 1995.]

The song's lyrics describe the experience of being a homeless man. The subject sleeps "on a pillow made of concrete" and panhandles passersby for spare change. In addition to being illiterate, he may also be mentally ill, as he "looks insane" when he smiles and struggles to keep coherent thoughts ("Even flow, thoughts arrive like butterflies/Oh, he don't know, so he chases them away").

At Pearl Jam's March 28, 1994 concert in Miami, , Vedder introduced the song by saying, "I thought I'd throw in a bit of street education while you still have an open mind...Right across the street there's a little homeless community that lives under the bridge. You should just know that those people ain't all crazy and sometimes it's not their fault. This song is called 'Even Flow'." [ [http://pearljamhistory.no.sapo.pt/PJArticles_Live_Song_Quotes.htm "Live Song Quotes"] . PearlJam10YearsAgo.no.sapo.pt. April 7, 2002.]

An alternate version of the song was recorded with drummer in 1992 while the band was recording songs for the soundtrack for the movie "Singles".

The song peaked at number three on the "Billboard" Mainstream Rock Tracks chart and number 21 on the "Billboard" Modern Rock Tracks chart. Outside of the United States, the single was released in , , , , the , and the . In , the song reached the top 80 on the Canadian Singles Chart. "Even Flow" peaked at number 27 in the UK and number 22 on the Australian Singles Chart.

Chris True of called "Even Flow" "the somewhat less ballady more swaggering follow up to the breakout single 'Alive'." True said that the song "doesn’t even really have an intro — it just starts and keeps going — and the band seems more in the groove than on the overly earnest 'Alive'." True said that the song "confirmed that Pearl Jam were more than just one hit grunge rock wonders." [True, Chris. [http://www.allmusic.com/cg/amg.dll?p=amg&sql=33:m9x8b5n49sxs "Even Flow > Review"] . . Retrieved on May 16, 2008.] The song was placed at #77 on a list of "The 100 Greatest Guitar Songs of All Time" by "Rolling Stone".

Pearl Jam originally hired director to film a video for the song. On January 31, 1992, on their way to to begin a an tour, the band members came to Los Angeles to shoot the video. The concept for the video was based on an idea by Gossard. [Weisbard, Eric, et al. [http://www.fivehorizons.com/archive/articles/spin801.shtml "Ten Past Ten"] . "Spin". August 2001.] Schenck filmed Pearl Jam in a setting. He had arranged a nighttime shoot at an old, closed facility, brought in different , and set up his lights among the cages and in the trees. Along with the animal footage, the members of Pearl Jam were filmed individually and as a band, standing on the side of a cliff and air jamming. The shoot took hours, and the band was not pleased with the end result. Schenck's shoot was considered a waste of time and money by the band; it also damaged Abbruzzese's wrists significantly. After shooting had finished, he was taken to the emergency room where he was advised not to put strain on his wrists. Abbruzzese would drum on the band's European tour with a splint attached to his hands.

was filming that night not in his capacity as a director, but as a friend of Gossard's. (At one point during the show, Vedder had even stopped the proceedings, clearly of the opinion that Taft's presence was intrusive. "This is not a TV studio, Josh" he'd yelled indignantly, in an interlude that Taft left in his final cut but that MTV clipped out of most versions it aired. "Turn those lights out, it's a fucking rock concert!") Taft's presence at the Moore Theatre show, and the fact that he'd shot sufficient footage to compile into a music video, proved to be a break for the band. Otherwise with Epic ready to provide MTV with an "Even Flow" clip and Schenck's version already completed, Pearl Jam would have had little choice but to go with it, and the band members unanimously despised Schenck's version when they saw the final edit. The alternate studio recording of "Even Flow", which was recorded in 1992 with Abbruzzese, was used for the video as the band felt it synched up well with the live footage. The video was released in April 1992.

An instrumental version of the song by appears on the band's 1995 self-titled debut album, performed entirely using vintage s.