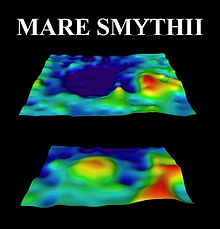 This figure shows the topography (top) and corresponding gravity (bottom) signal of Mare Smythii, revealing a mascon in its center.

Mare Smythii (Latin for "Sea of Smyth") is a lunar mare located along the equator on the easternmost edge of the lunar near side. The Smythii basin where the mare is located is of the Pre-Nectarian epoch, while the surrounding features are of the Nectarian system. The mare material, which make up the floor of the mare, is a high aluminous basalt, and consists of Upper Imbrian basalt covered by Eratosthenian basalt.