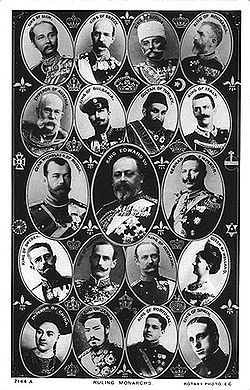 1908 postcard depicting nineteen reigning monarchs; eleven of their thrones have since been abolished.

Throughout history, monarchies have been abolished, either through revolutions, legislative reforms, coups d'état, or wars. The twentieth century saw a major acceleration of this process, with many monarchies violently overthrown by revolution or war, or else abolished as part of the process of de-colonisation. The twenty-first century has already seen several monarchies abolished, usually by peaceful means in a referendum. By contrast, the restoration of monarchies is rare in modern times, with only two major examples, Spain and Cambodia.

The Second French Empire came to an end in 1870 after it had lost the war against Prussia, causing Emperor Napoleon III to lose his throne. He was the last monarch of France. The Second Mexican Empire collapsed in 1867, and its Emperor, Maximilian I of Mexico, was executed. In Spain monarchy was abolished from 1873 to 1874 by the First Spanish Republic, but then restored until 1931. In 1893 foreign business leaders overthrew the Queen of the Kingdom of Hawaii. They established a republic, which joined the United States in 1898. The monarchy of Madagascar, known as the Merina Kingdom, came to an end in 1897 when France made it a colony and overthrew Queen Ranavalona III. In Brazil, monarchy was abolished in 1889, when Emperor Pedro II was overthrown by a republican military coup (the status of the republic was fully confirmed by a plebiscite in 1993 that resulted in 86,6% of the votes to the republican government).

In 1910 the last emperor of Korea, Sunjong, lost his throne when the country was annexed by Japan. The monarchy of Portugal was also overthrown in 1910, two years after the assassination of King Carlos I, ending the reign of Manuel II.

The ancient monarchy of China ceased to exist in 1912 after the revolution of Sun Yat-sen overthrew Emperor Puyi. General Yuan Shikai unsuccessfully tried to revive the monarchy in 1915.

World War I led to perhaps the greatest spate of abolition of monarchies in history. The conditions inside Russia and the poor performance in the war gave rise to a communist revolution which toppled the entire institution of the monarchy, executed Emperor Nicholas II and implemented a marxist-leninist government. The defeated German, Austro-Hungarian and Ottoman empires saw the abolition of their monarchies in the close aftermath of the war, ending the reigns of Wilhelm II, Charles I and Mehmed VI respectively. The monarchs of the constituent states within the German Empire, most importantly Ludwig III of Bavaria, Frederick Augustus III of Saxony and Wilhelm II of Württemberg, soon abdicated. During the war, monarchies were planned for the Grand Principality of Finland (to have a Finnish King), and for Lithuania (Mindaugas II of Lithuania), with a protectorate-like dependency of Germany. Both intended kings renounced their thrones after Germany's defeat in November 1918. King Nicholas I of Montenegro lost his throne when the country became a part of Yugoslavia in 1918.

World War II saw another spate of abolitions. In 1939 Italy invaded Albania and removed the reigning self-proclaimed King Zog and instated their own King Victor Emmanuel III as its new monarch. Italy, along with the eastern European monarchies of Bulgaria, Hungary and Romania joined with Germany in World War II against the Kingdom of Yugoslavia, the Western allies and the Soviet Union. As the Axis powers came to a defeat in the war, communist partisans in occupied Yugoslavia and occupied Albania seized power and ended the monarchies. Communists in Bulgaria, Hungary and Romania removed their monarchies with strong backing by the Soviet Union, which had many troops and supporters placed there during the course of the war. Through this, Peter II of Yugoslavia, Simeon II of Bulgaria and Michael I of Romania all lost their thrones. King Victor Emmanuel III of Italy had switched sides during the war in favour of the western allies, but a referendum in 1946 ended the short reign of his son King Umberto II and the Italian monarchy ceased to exist. A unique result of the war was that Emperor Hirohito of Japan, who had held a debated but important role in Japan's warfare against the Allied powers, was reduced in stature from a divine monarch to a figurehead by the occupying United States, instead of losing his throne altogether.

Throughout Greece's eventful modern history, the monarchy was toppled and restored several times between and after the two World Wars. The last king, Constantine II, was forced into exile after a coup d'état in 1967 and the republic was proclaimed in 1973 by the then ruling military dictatorship. Final abolition of the monarchy was confirmed overwhelmingly after constitutional legality was restored, by free referendum in 1974.

Many monarchies were abolished in the middle of the 20th century or later as part of the process of de-colonisation. The monarchies of India, Kenya, Tanzania, Zambia, and Zimbabwe were abolished when, or shortly after, they became independent of the United Kingdom, while remaining within the Commonwealth. That of Ireland was not abolished when Ireland became independent of the United Kingdom in the 1920s, but by the Republic of Ireland Act of 1948, which came into force in 1949. Pakistan became a republic in 1956. The monarchy in South Africa was abolished in 1961 by an apartheid referendum. The latest country to become a Commonwealth republic was Mauritius in 1992.

That of Egypt and Sudan was abolished in 1953, after the revolution of 1952, which caused King Farouk I to abdicate in favour of his minor son Fuad II. The monarchy of Tunisia ended in 1957 when Muhammad VIII al-Amin lost his throne and that of Iraq when King Faisal II was killed and a republic proclaimed. King Idris of Libya was overthrown by a military coup led by Muammar Gaddafi in 1969. The monarchy of Afghanistan was abolished in 1973 after a coup d'état overthrew King Mohammed Zahir Shah. That of Iran was abolished by the Islamic revolution of 1979 overthrowing Mohammad Reza Pahlavi. In Ethiopia Emperor Haile Selassie I was overthrown in 1974 as a result of a democratic revolution supplanted later by a radical leftist coup. Political upheaval and Communist insurrection put an end to the monarchies of Indochina after World War II: a short-lived attempt to leave a monarchical form of government in post-colonial South Vietnam came to naught in 1955, a military coup overthrew the kingless monarchy in Cambodia in 1970 and a Communist takeover ended the monarchy in Laos in 1975. Cambodia's monarchy later saw an unexpected rebirth under an internationally-mediated peace settlement with former king Norodom Sihanouk being restored as a figurehead in 1993.

Brazil rejected an attempt to restore its monarchy in the 1990s. Unsuccessful efforts to restore the monarchies of some of the Balkan states in the former Eastern Bloc continue. Former King Michael of Romania and Prince Alexander of Serbia have been allowed to return, gained some popularity, played largely apolitical public roles, but never came close to being restored to their ancestral thrones. However, in Bulgaria, Simeon Saxe-Coburg-Gotha, who was deposed from the Bulgarian throne in 1946, was elected and recently served as the Prime Minister of his country from 2001 to 2005. The only formerly socialist country to have held a referendum on the monarchy was Albania where the claimant to his father's throne, the self-styled Leka I, lost by a huge margin in 1997.

In a 1999 referendum, the voters of Australia rejected a proposal to abolish their monarchy in favour of a specific republican model. The proposal was rejected in all states, with only the Australian Capital Territory voting in favour.

On 24 December 2007, the Nepalese government decided in an accord to abolish the monarchy after the elections to be held in April 2008.[1] The Nepalese monarchy was formally abolished on 28 May 2008, causing King Gyanendra to lose his throne. After the death of its last non-elected ruler in 2007, Malietoa Tanumafili II, Samoa became a de-facto republic.

Monarchies abolished in the 20th–21st centuries

Current monarchies that were abolished and then restored