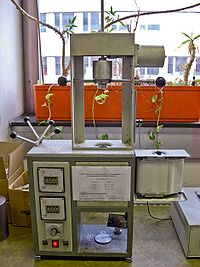 Photograph of a machine used to determine the Melt Flow Rate of thermoplastics according to ISO 1133.

Melt flow index or MFI is a measure of the ease of flow of the melt of a thermoplastic polymer. It is defined as the mass of polymer, in grams, flowing in ten minutes through a capillary of a specific diameter and length by a pressure applied via prescribed alternative gravimetric weights for alternative prescribed temperatures. The method is described in the similar standards ASTM D1238 and ISO 1133.

Melt flow rate is very commonly used for polyolefins, polyethylene being measured at 190°C and polypropylene at 230°C. The plastics converter should choose a material with a melt index so high that he can easily form the polymer in the molten state into the article intended, but on the other hand so low that the mechanical strength of the final article will be sufficient for its use.

The procedure for determining MFI is as follows:

Confusingly, MFR may also indicate "melt flow ratio", the ratio between two melt flow rates at different gravimetric weights. More accurately, this should be reported as FRR (flow rate ratio), or simply flow ratio. FRR is commonly used as an indication of the way in which rheological behavior is influenced by the molecular mass distribution of the material.