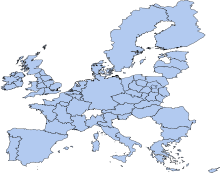 In six EU member states (Belgium, France, Ireland, Italy, Poland and the United Kingdom), the national territory is divided into a number of constituencies. In the remaining member states, the whole country forms a single constituency. In Germany, political parties are entitled to present lists of candidates either at Länder or national level.

Currently, all member states hold elections to the European Parliament (EP) using various forms of proportional representation (although since the German-speaking electoral college in Belgium has only one seat, its election is essentially first-past-the-post).

The population of constituencies varies widely across the union.

Currently, the German speaking community of Belgium are the most represented in the EU Parliament with one seat for their 71,000 population, while the people of Sardinia and Sicily are the least represented, with only one seat per 943,000 people.

The number of seats per constituency varies from 1 in the German speaking community of Belgium, to 23 in the north-west region of Italy. When counting countries without specific subdivisions as single constituencies for comparison, Germany has the most seats — 99 seats.