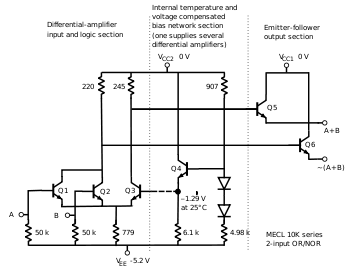 In electronics, emitter-coupled logic (ECL), is a logic family that achieves high speed by using an overdriven BJT differential amplifier with single-ended input, whose emitter current is limited to avoid the slow saturation region of transistor operation.[2] As the current is steered between the two legs of the emitter-coupled pair, ECL is sometimes called current-steering logic (CSL),[3] current-mode logic (CML)[4] or current-switch emitter-follower (CSEF) logic.[5]

In ECL, the transistors are never in saturation, the input/output voltages have a small swing (0.8 V), the input impedance is high, and the output resistance is low; as a result, the transistors change states quickly, gate delays are low, and the fanout capability is high.[6] In addition, the complementary outputs decrease the propagation time of the whole circuit by saving additional inverters. ECL's major disadvantage is that the circuit continuously draws current, which means it requires a lot of power.

The equivalent of emitter-coupled logic made out of FETs is called source-coupled FET logic (SCFL).[7]

A variation of ECL in which all signals paths and gate inputs are differential is known as differential current switch (DCS) logic.[8] 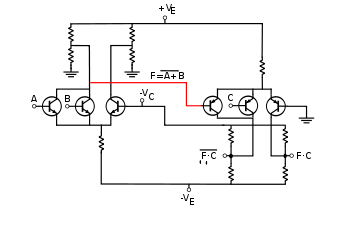 While ECL circuits in the mid-1960s through the 1990s consisted of a differential amplifier input stage to perform logic, followed by an emitter follower to drive outputs and shift the output voltages so they will be compatible with the inputs, Yourke's current switch, also known as ECL, consisted only of differential amplifiers. To provide compatible input and output levels, two complementary versions were used, an NPN version and a PNP version. The NPN output could drive PNP inputs, and vice-versa. "The disadvantages are that more different power supply voltages are needed, and both pnp and npn transistors are required."[9]

The drawbacks associated with ECL have meant that it has been used mainly when high performance is a vital requirement. Older high-end mainframe computers, such as the Enterprise System/9000 members of IBM's ESA/390 computer family, used ECL[14] as did the Cray-1;[15] current IBM mainframes use CMOS. 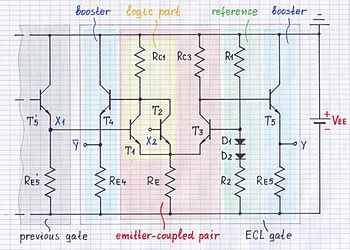 The picture represents a typical ECL circuit diagram based on Motorola's MECL. In this schematic, transistor T5′ represents the output transistor of a previous ECL gate that provides a logic signal to input transistor T1 of an OR/NOR gate whose other input is at T2 and has outputs Y and Y. Additional pictures illustrate the circuit operation by visualizing the voltage relief and current topology at low input voltage (logical "0"), during the transition and at high input voltage (logical "1").

ECL is based on an emitter-coupled (long-tailed) pair, shaded red in the figure on the right. The left half of the pair (shaded yellow) consists of two parallel-connected input transistors T1 and T2 (an exemplary two-input gate is considered) implementing NOR logic. The base voltage of the right transistor T3 is held fixed by a reference voltage source, shaded light green: the voltage divider with a diode thermal compensation (R1, R2, D1 and D2) and sometimes a buffering emitter follower (not shown on the picture); thus the emitter voltages are kept relatively steady. As a result, the common emitter resistor RE acts nearly as a current source. The output voltages at the collector load resistors RC1 and RC3 are shifted and buffered to the inverting and non-inverting outputs by the emitter followers T4 and T5 (shaded blue). The output emitter resistors RE4 and RE5 do not exist in all versions of ECL. In some cases 50 Ω line termination resistors connected between the bases of the input transistors and −2 V act as emitter resistors.[16]

The ECL circuit operation is considered below with assumption that the input voltage is applied to T1 base, while T2 input is unused or a logical "0" is applied.

During the transition, the core of the circuit – the emitter-coupled pair (T1 and T3) – acts as a differential amplifier with single-ended input. The "long-tail" current source (RE) sets the total current flowing through the two legs of the pair. The input voltage controls the current flowing through the transistors by sharing it between the two legs, steering it all to one side when not near the switching point. The gain is higher than at the end states (see below) and the circuit switches quickly.

At low input voltage (logical "0") or at high input voltage (logical "1") the differential amplifier is overdriven. The one transistor (T1 or T3) is cut-off and the other (T3 or T1) is in active linear region acting as a common-emitter stage with emitter degeneration that takes all the current, starving the other cut-off transistor.
The active transistor is loaded with the relatively high emitter resistance RE that introduces a significant negative feedback (emitter degeneration). To prevent saturation of the active transistor so that the diffusion time that slows the recovery from saturation will not be involved in the logic delay,[2] the emitter and collector resistances are chosen such that at maximum input voltage some voltage is left across the transistor. The residual gain is low (K = RC/RE < 1). The circuit is insensitive to the input voltage variations and the transistor stays firmly in active linear region. The input resistance is high because of the series negative feedback.
The cut-off transistor breaks the connection between its input and output. As a result, its input voltage does not affect the output voltage. The input resistance is high again since the base-emitter junction is cut-off.

Other noteworthy characteristics of the ECL family include the fact that the large current requirement is approximately constant, and does not depend significantly on the state of the circuit. This means that ECL circuits generate relatively little power noise, unlike many other logic types which typically draw far more current when switching than quiescent, for which power noise can become problematic. In cryptographic applications, ECL circuits are also less susceptible to side channel attacks such as differential power analysis.

The propagation time for this arrangement can be less than a nanosecond, making it for many years the fastest logic family.

The ECL circuits usually operate with negative power supplies (positive end of the supply is connected to ground) in contrast to other logic families in which negative end of the supply is grounded. This is done mainly to minimize the influence of the power supply variations on the logic levels as ECL is more sensitive to noise on the VCC and relatively immune to noise on VEE.[17] Because ground should be the most stable voltage in a system, ECL is specified with a positive ground. In this connection, when the supply voltage varies, the voltage drops across the collector resistors change slightly (in the case of emitter constant current source, they do not change at all). As the collector resistors are firmly "tied up" to ground, the output voltages "move" slightly (or not at all). If the negative end of the power supply was grounded, the collector resistors would be attached to the positive rail. As the constant voltage drops across the collector resistors change slightly (or not at all), the output voltages follow the supply voltage variations and the two circuit parts act as constant current level shifters. In this case, the voltage divider R1-R2 compensates the voltage variations to some extent. The positive power supply has another disadvantage - the output voltages will vary slightly (±0.4 V) against the background of high constant voltage (+3.9 V). Another reason for using a negative power supply is protection of the output transistors from an accidental short circuit developing between output and ground[18] (but the outputs are not protected from a short circuit with the negative rail).

The value of the supply voltage is chosen so that a sufficient current to flow through the compensating diodes D1 and D2 and the voltage drop across the common emitter resistor RE to be adequate.

ECL circuits available on the open market usually operated with logic levels incompatible with other families. This meant that interoperation between ECL and other logic families, such as the popular TTL family, required additional interface circuits. The fact that the high and low logic levels are relatively close meant that ECL suffers from small noise margins, which can be troublesome.

At least one manufacturer, IBM, made ECL circuits for use in the manufacturer's own products. The power supplies were substantially different from those used in the open market.[14]