Nitrogen fixation is the natural process, either biological or abiotic, by which nitrogen (N2) in the atmosphere is converted into ammonia (NH3).[1] This process is essential for life because fixed nitrogen is required to biosynthesize the basic building blocks of life, e.g., nucleotides for DNA and RNA and amino acids for proteins. Nitrogen fixation also refers to other biological conversions of nitrogen, such as its conversion to nitrogen dioxide.

Microorganisms that fix nitrogen are bacteria called diazotrophs. Some higher plants, and some animals (termites), have formed associations (symbioses) with diazotrophs. Nitrogen fixation also occurs as a result of non-biological processes. These include lightning, industrially through the Haber-Bosch Process, and combustion.[2] Biological nitrogen fixation was discovered by the German agronomist Hermann Hellriegel and Dutch microbiologist Martinus Beijerinck. 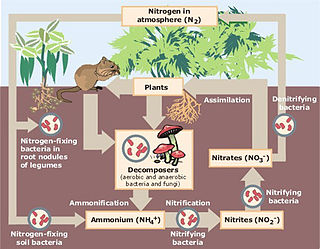 Schematic representation of the nitrogen cycle. Abiotic nitrogen fixation has been omitted.

Biological nitrogen fixation (BNF) occurs when atmospheric nitrogen is converted to ammonia by an enzyme called nitrogenase.[1] The reaction for BNF is:

The process is coupled to the hydrolysis of 16 equivalents of ATP and is accompanied by the co-formation of one molecule of H2. In free-living diazotrophs, the nitrogenase-generated ammonium is assimilated into glutamate through the glutamine synthetase/glutamate synthase pathway.

Enzymes responsible for nitrogenase action are very susceptible to destruction by oxygen. (In fact, many bacteria cease production of the enzyme in the presence of oxygen).[1] Many nitrogen-fixing organisms exist only in anaerobic conditions, respiring to draw down oxygen levels, or binding the oxygen with a protein such as Leghemoglobin.[1]

Nitrogen fixation by rhizobia and frankia

Rhizobia are Gram-negative soil bacteria with the ability to establish a N2-fixing symbiosis on legume roots and on the stems of some aquatic legumes. During this interaction bacteroids, as rhizobia are called in the symbiotic state, are contained in intracellular compartments within a specialized organ, the nodule, where they fix N2. Similarly, Frankia, Gram-positive soil bacteria induce the formation of nitrogen-fixing nodules in actinorhizal plants. [3]

Cyanobacteria inhabit nearly all illuminated environments on Earth and play key roles in the carbon and nitrogen cycle of the biosphere. In general, cyanobacteria are able to utilize a variety of inorganic and organic sources of combined nitrogen, like nitrate, nitrite, ammonium, urea, or some amino acids. Several cyanobacterial strains are also capable of diazotrophic growth. Genome sequencing has provided a large amount of information on the genetic basis of nitrogen metabolism and its control in different cyanobacteria. Comparative genomics, together with functional studies, has led to a significant advance in this field over the past years. 2-Oxoglutarate has turned out to be the central signalling molecule reflecting the carbon/nitrogen balance of cyanobacteria. Central players of nitrogen control are the global transcriptional factor NtcA, which controls the expression of many genes involved in nitrogen metabolism, as well as the PII signalling protein, which fine-tunes cellular activities in response to changing C/N conditions. These two proteins are sensors of the cellular 2-oxoglutarate level and have been conserved in all cyanobacteria. In contrast, the adaptation to nitrogen starvation involves heterogeneous responses in different strains.[4] Nitrogen fixation by cyanobacteria in coral reefs can fix twice the amount of nitrogen than on land–around 1.8 kg of nitrogen is fixed per hectare per day.

Plants that contribute to nitrogen fixation include the legume family – Fabaceae – with taxa such as clovers, soybeans, alfalfa, lupines, peanuts, and rooibos. They contain symbiotic bacteria called Rhizobia within nodules in their root systems, producing nitrogen compounds that help the plant to grow and compete with other plants. When the plant dies, the fixed nitrogen is released, making it available to other plants and this helps to fertilize the soil[1][5] The great majority of legumes have this association, but a few genera (e.g., Styphnolobium) do not. In many traditional and organic farming practices, fields are rotated through various types of crops, which usually includes one consisting mainly or entirely of clover or buckwheat (family Polygonaceae), which are often referred to as "green manure." 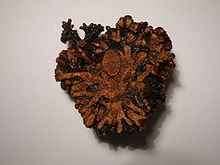 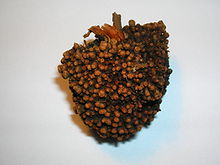 Although by far the majority plants able to form nitrogen-fixing root nodules are in the legume family Fabaceae, there are a few exceptions:

There are also several nitrogen-fixing symbiotic associations that involve cyanobacteria (such as Nostoc):

Nitrogen can also be artificially fixed as ammonia for use in fertilizers, explosives, or in other products. The most common method is the Haber process. Artificial fertilizer production is now the largest source of human-produced fixed nitrogen in the Earth's ecosystem.[9]

The Haber process requires high pressures (around 200 atm) and high temperatures (at least 400 °C), routine conditions for industrial catalysis. This highly efficient process uses natural gas as a hydrogen source and air as a nitrogen source.

Much research has been conducted on the discovery of catalysts for nitrogen fixation, often with the goal of reducing the energy required for this conversion. However, such research has thus far failed to even approach the efficiency and ease of the Haber process. Many compounds react with atmospheric nitrogen under ambient conditions. For example, lithium metal converts to lithium nitride under an atmosphere of nitrogen. Treatment of the resulting nitride gives ammonia.

The first dinitrogen complex was reported in 1965 based on ammonia coordinated to ruthenium ([Ru(NH3)5(N2)]2+).[10] Research in chemical fixation from then on focused on transition metal complexes. Since then, a large number of transition metal compounds that contain dinitrogen as a ligand have been discovered. The dinitrogen ligand can either be bound to a single metal or bridge two (or more) metals. The coordination chemistry of dinitrogen is complex and currently under intense investigation. This research may lead to new ways of using dinitrogen in synthesis and on an industrial scale.

Catalytic chemical nitrogen fixation at temperatures considerably lower than the Haber process is an ongoing scientific endeavor. Nitrogen was successfully converted to ammonia and hydrazine by Alexander E. Shilov in 1970.[11][12] The first example of homolytic cleavage of dinitrogen under mild conditions was published in 1995. Two equivalents of a molybdenum complex reacted with one equivalent of dinitrogen, creating a triple bonded MoN complex.[13] Since then, this triple bounded complex has been used to make nitriles.[14]

The first catalytic system converting nitrogen to ammonia at room temperature and pressure was discovered in 2003 and is based on another molybdenum compound, a proton source, and a strong reducing agent.[15][16][17][18] However, this catalytic reduction fixates only a few nitrogen molecules. 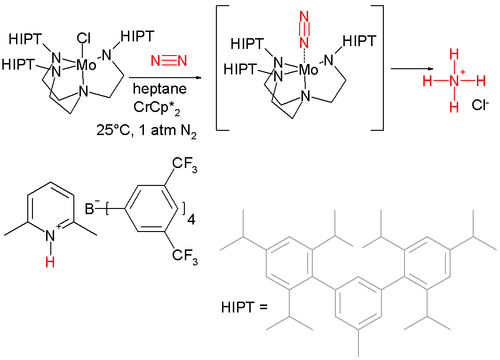 In 2011 Arashiba et al. reported another system with a catalyst again based on molybdenum but with a diphosphorus pincer ligand.[19]