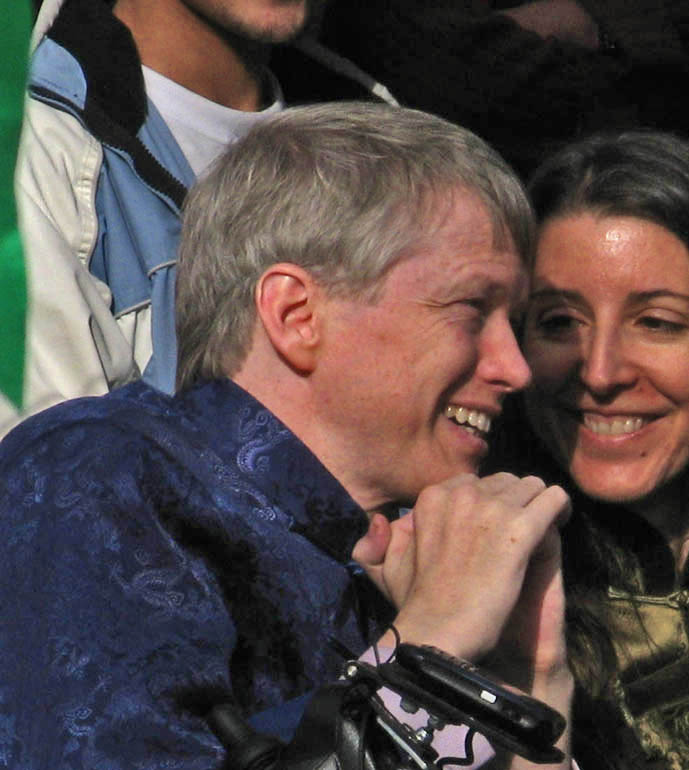 The extremely athletic 191cm Sullivan became paralyzed after he broke his neck in a skiing accident at the age of 19. After a struggle with depression, he successfully completed a degree at . Sullivan later founded six s dedicated to improving the quality of life for disabled people in North America. Though he is considered quadriplegic, Sullivan has retained the use of his feet and hands to limited degrees, and can thus write, use the telephone, and drive. [cite news|first=Greg|last=Bishop|title=Maverick Vancouver, B.C., mayor faces Olympic-size challenge|publisher=The Seattle Times|date=September 30, 2007
url=http://seattletimes.nwsource.com/html/localnews/2003913745_mayor30.html|accessdate=2007-10-02]

Sullivan is also known for his advocacy on behalf of the physically disabled. In 2005, Sullivan was invested as a member of the by . Sullivan has also received the Award for national excellence and the Award for Innovation.

After being involved in creating non-profit societies and volunteering for non-profit initiatives, Sam met a number of people involved in politics. Former BC provincial cabinet minister suggested that Sam consider running for council. He had spent quite a few years improving the lives of others with disabilities, and realized government had lots to do with that area.

Sullivan was first elected to in 1993 as a member of the (NPA). With 15 years of council experience, Sullivan is currently the longest-serving member of the council.

In Vancouver's 2002 General Local elections, Sullivan was the only incumbent member of city council from the to win re-election after the NPA-dominated council was defeated by the COPE party.

In 2004, he led the campaign opposing the COPE-initiated campaign to replace the city's at-large system of choosing councillors with a ward voting system. The proposal was defeated 54% to 46% in a referendum.

Following the 2002 electoral losses, the rebuilt its slate for 2005. Several high-profile names were nominated to be the NPA mayoral candidate. One of the most prominent contenders was the former BC Liberal Party deputy-Premier . Sullivan defeated Clark to become the , pro-business, NPA mayoral candidate.

Sullivan ran against several candidates, the most prominent of which was councillor . Sullivan defeated Green by a narrow margin of 3,747 votes of 130,000 ballots cast in the , municipal election. A second, independent, candidate named James Green also ran in this election gaining over 4,000 votes. Along with Sullivan, five other NPA councillors were voted into chambers and formed a majority government.

On , Sullivan provided a statement to the about his past decisions to provide money to illegal drug users. Because of increased public awareness surrounding these incidents after the mayoralty race, the Vancouver Chief of Police requested that the RCMP investigate these incidents.

Sullivan's statement gave a brief account of his decision to provide heroin to a 20-year-old woman working as a prostitute in his neighbourhood in the late 1990s, by providing $40 a day for three weeks for heroin. Sullivan said he bought crack in 2001 for 41-year-old drug user and Downtown Eastside resident Shawn Millar, and let him smoke it in his van. Sullivan's version differs slightly from Millar's in a few places, most notably in who suggested going back to buy drugs a second time. Millar said in previous interviews with "The Vancouver Sun" that Sullivan complained to him after the first buy that he hadn't been able to really see what happened, and that he asked Millar to go back a second time to get more drugs so he could observe more closely what happened.

Sullivan says in his statement that Millar bought drugs once and "smoked it while seated in my passenger seat" before Sullivan started driving him home. "But partway there he said he wanted to go back for more. I agreed, but asked him if he could tell me what he was looking for as he weaved through the crowds. I parked in what I thought was a better location to see the deal and gave him money." [cite news|title=Mayor tells police why he bought drugs|last=Bula|first=Frances|publisher=Vancouver Sun|date=2 May 2006|url=http://www.canada.com/vancouversun/news/story.html?id=70377688-d53f-4718-b23e-8ecedc7c21e7&k=53811&p=1|accessdate=2007-09-29]

Sullivan took part in the Closing Ceremony of the 2006 Winter Olympics, in the ceremony where the Olympic Flag was passed from to Vancouver. The ceremony involves an official of the current host city waving the flag eight times, then handing it off to an official of the next host city, who waves it eight times. When it was his turn, the flag was put into a special bracket built into Sullivan's wheelchair by James Drew, a member of the Vancouver based Tetra volunteer society that Sam was also involved with. Holding it with one of his hands, Sullivan then swung his wheelchair back and forth eight times to wave the flag.

During a press conference before the Ceremony, Sullivan poked fun at his disability, questioning whether they "should send Vancouver's worst skier to the Olympics to represent the country." [ [http://www.kold.com/Global/story.asp?S=4548022 Our Apologies ] ] Sullivan also revealed that he had practiced the flag waving in parking lots during nights. [http://www.miami.com/mld/miamiherald/sports/special_packages/olympics/13952110.htm]

After the event, Sullivan received thousands of letters from people across the world who were inspired by the act, and received many invitations to be a keynote speaker at conventions. A reporter from also offered to help him write his . "I especially was moved to get letters from people who wrote very eloquent letters, saying they had considered , and changed their mind when they saw me perform my duties...To see I had such an impact on people's lives was truly a humbling experience," Sullivan said in response to the reaction. [ [http://www.canada.com/theprovince/news/story.html?id=9c575798-57e8-4c5d-892d-949ccc9763bc&k=42980 Fan mail swamps Mayor Sam Sullivan ] ]

On , , Sullivan returned to Turin to repeat the flag ceremony process, this time for the closing ceremony of the . Sullivan received the flag from president and waved it in the same manner as the Olympic flag, then handed the flag over to Whistler mayor . This marks the first time a physically disabled mayor has accepted the Paralympic flag in the closing ceremony. Sullivan remarked, "There are a lot of Paralympic athletes who have contacted me. They say the fact of my being a mayor in a major city, an Olympic and Paralympic city, sends a strong message that disabled people can play an important and crucial part in society."

Sullivan's return to Turin was also marked by people recognizing him on the street, most likely due to his appearance at the Olympic closing ceremonies a month earlier. "I would get out of the car in the central square, the piazza, and people would come up wanting to talk to me and wanting my autograph," said Sullivan. "I wasn't really aware that so many people knew who I was." [ [http://www.canada.com/theprovince/news/story.html?id=a5ad9052-0cf5-4b4b-a4d7-bcdb7f7936cf Hero's welcome for Vancouver mayor ] ]

Sullivan conducted an informal survey on his website asking visitors how they felt about Civil Disorder in the City of Vancouver. On , , he released the results of his survey and created a new program called Project Civil City, which is known as the mayor's effort to enhance public order in Vancouver's public areas. There are four main goals of the project which include reducing homelessness, aggressive panhandling and the open drug market by at least 50% by 2010. Former Attorney General was appointed to the new position of Civil City Commissioner to play a leadership role in helping to achieve the targets outlined by the Mayor. Project Civil City was opposed by a number of councilors on city council, but passed in a 6-5 vote. Critics have charged that the initiative amounts to little more than a campaign to further displace the city's homeless population and a repackaging the crackdown on crime that is already underway. [cite news|first=Monte|last=Paulsen|title=Mayor Sullivan's Big Ambition|publisher=The Tyee|date=December 21, 2006
url=http://thetyee.ca/News/2006/12/21/CivilCity/|accessdate=2007-09-07]

In advance of the World Urban Forum held in Vancouver in June 2006, Mayor Sullivan was joined by a number of environmentalists, community activists and academics to launch his proposal called EcoDensity. In a move that was roundly criticized by both community members and the local media, Sullivan registered the term EcoDensity with the patent office under his name.

EcoDensity has a goal of protecting the local and global ecology through the use of densification as a means of reducing the City's ecological footprint. Sullivan claims that by increasing density throughout the city, there will be a reduced requirement for people to make unnecessary car trips, hence reducing carbon emissions.

EcoDensity also aims to increase housing affordability as well as make cities more competitive by making them less reliant on fossil fuels. Sullivan indicates that if more cities around the world enacted EcoDensity principles, it would have a great impact on climate change.

On Feb 26, 2007, Mayor Sullivan unveiled an initiative to assist the thousands of drug addicted individuals living in Vancouver.

CAST will work with addicted people to change from using illegal street drugs to legally available, orally-administered prescription medications. After a consultation, Physicians will prescribe appropriate medications. Clients will be monitored on a regular basis and provided with counseling for their addiction issues and assistance with accessing supportive housing options.

Ending drug dependency is the ultimate goal of the trial. Substitution treatment is a means of reducing the users’ impact on public order and public health until durable solutions are reached.

In June 2007, CAST was formally approved in principle by the Vancouver City Council by a vote of 9 to 1. Only one City Councilor, , voted against the proposal while, Councilor was absent for the vote.

A civic strike of Vancouver's inside, outside, and library workers that began in July 2007 has been dubbed "Sam's Strike" by the strikers. The unions personally blame Sullivan's intransigence at the bargaining table for prolonging the strike. [cite news|last=Tieleman|first=Bill|title=Clueless Sam's Strike Show|date=July 31, 2007|url=http://vancouver.24hrs.ca/Columnists/NewsViewsAttitude/2007/07/31/4381513-sun.html|accessdate=2007-09-07]

For their 2008 municipal election nominations, the NPA decided to allow incumbents to be "green-lighted" as nominees for the election. NPA councillor eventually announced that he wanted to challenge Sullivan for mayor. Sullivan, and subsequently the other NPA incumbents, then announced that they would not exercise their option to be fast-tracked.

On June 8, 2008, it was announced that had defeated Sullivan to win the NPA's mayoral nomination. Ladner beat Sullivan in a tight, 1,066-to-986 vote after convincing NPA members that Sullivan would be defeated in the municipal election and that a change in leadership was needed.

Nanitch is a non-profit society founded in 2002 by then-city Councillor Sullivan and a handful of friends. The society was incorporated to promote the well being of "marginalized or disabled" community members.

By 2004 the society had become intertwined with the Knowards Coalition, a Sullivan-led effort that successfully fought against the creation of ward-style electoral districts in Vancouver. It was widely believed that a ward system would reduce the power of the affluent West Side of Vancouver to continue to rule Vancouver.

In December of 2004, Nanitch/Knowards made a $5,136 donation to the Non-Partisan Association, the city electoral organization represented by then city Councillor Sullivan. The donation was disclosed in the NPA's campaign finance statement.

Five of his fellow Nanitch directors told The Tyee they were unaware their society had donated money to Sullivan's political party. Upon learning of the gift, one former director said simply: "Well, I'll be damned."

The address and phone number provided for Nanitch corresponds with what then served as the offices of six other societies founded by Sullivan. Those groups -- which include well-known organizations such as the Disabled Sailing Association of BC, the Vancouver Adapted Music Society and the Tetra Society of North America -- have since been rolled into an umbrella group called the Disability Foundation.

Those groups are well-heeled: four of those societies posted combined revenue of $1.25 million in 2004, according to a report by veteran city hall reporter Frances Bula, published in the September 2006 issue of BC Business magazine. Provincial taxpayers provided $500,000 of that revenue, according to Bula.

Community Services Minister Ida Chong has brushed aside calls for a provincial investigation into Mayor Sam Sullivan's fundraising practices, claiming there is insufficient evidence to warrant an investigation of the Vancouver mayor's tightly-held Nanitch Policy Society.

*Sullivan has a long history with BC's Chinese community and is the first Vancouver mayor capable of speaking basic Cantonese and of reading Chinese. [ [http://www.city.vancouver.bc.ca/ctyclerk/councillors/sullivan/ City of Vancouver: Mayor Sam Sullivan ] ] He also learned to read and speak Punjabi.