Obtaining an armlock requires effective use of full-body leverage in order to initiate and secure a lock on the targeted arm, while preventing the opponent from escaping the lock. Therefore, performing an armlock is less problematic on the ground, from positions such as the mount, side control, or guard. Armlocks are more difficult to perform when both combatants are standing up, though the stand-up variants are a focus in certain systems such as Chin Na. Furthermore, a failed armlock can sometimes result in the opponent escaping and obtaining a dominant position.

Armlocks, considered less dangerous techniques in combat sports allowing joint locks, are the most common joint locks used as submission holds. In training, the method of executing an armlock is generally slow and controlled to give the opponent time to submit prior to any infliction of injury. However, in self-defense applications, or when applied improperly or with excessive force, armlocks can cause muscle, tendon and ligament damage, even dislocation, or bone fractures. 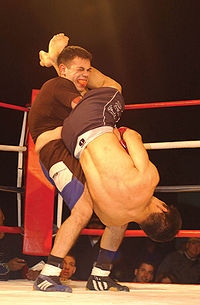 A fighter attempts to escape from an armbar by slamming the opponent to the ground.

The juji-gatame (十字固, rendered as Ude-Hishigi-Juji-Gatame) also sometimes used interchangeably with the terms armbar or straight armbar is an official Kodokan Judo technique. The English word "bar" is used here to signify the opponent's extended arm, while the Japanese word "juji" (十字) refers to the armbar's visual resemblance to the number 10 as written in Kanji, 十. The word juji is also found in "juujika" (十字架), meaning a cross. In general, the practitioner secures an arm at the wrist of the opponent, trapping it by squeezing the knees together. The attacker's legs end up across the opponent's chest, with the arm held between the thighs, with the elbow pointing against the thigh or hips. By holding the opponent's wrist to the attacker's chest with the pinky finger on the sternum and the thumb facing up (arm semi supinated or semi pronated), the practitioner can easily extend the opponent's arm and hyperextend the opponent's elbow. The attacker can further increase the pressure on the elbow joint by arching their hips against the elbow. This technique is used in various grappling martial arts, including but not limited to; Brazilian jiu-jitsu, Catch wrestling, Judo, Jujutsu, Sambo, Shoot wrestling, and is one of the most common ways to win a match in mixed martial arts competition.[1]

The flying armbar is a version of the juji-gatame that is performed from a stand-up position. Without a gi, it is typically applied when the opponent has a collar tie. By tightly holding the opponent's neck and arm, the practitioner places one of their shins against the opponents midsection, and leans up on the opponent; at the same time, the attacker swings the leg on the same side as the opponent's collar tie over the opponents head, into the typical juji-gatame position. (With a gi, it can be performed without needing to hold the neck.) If improperly performed, this technique will cause the opponent to escape the hold and gain an advantageous position, even the option of slamming the attacker to the ground. The flying armbar is considered to be one of the most visually spectacular joint locks, but it is uncommon because of the risk of losing position.

The flying armbar is a little different version of the armbar, which is also used by Wrestling and Jiu Jitsu. When the attacker stands in front of the opponent, he grabs both of his arms and falls backwards, causing the opponent to lean forward. Than the attacker puts his feet on the opponent's stomach or hips and lifts him up with his feet. The attacker will drop the opponent beside him, and perform the armbar.

The sankaku-gatame or "triangular armlock" is a juji-gatame performed from the sankaku position. Originating from Judo it is normally used when the shime (strangle) is not working. It's an effective competition technique due to the fact that the opponent's arm became exposed while defending the sankaku-jime and their attention is focused in stopping the strangle.

An elbow lock is a type of joint lock that hyperflexes or hyperrotates the elbow joint. An elbow lock is applied by forcing the arm beyond its normal range of elbow-wise movement, which can be done through a variety of ways. Typically, the body is controlled from moving by using a pinning hold, and the arm is then pulled, pushed or twisted. 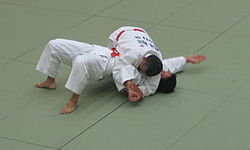 The keylock, (also known as the figure-four armlock, bent armlock, paintbrush, americana, or ude-garami/arm entanglement[2] in Judo.[3]) is a grappling technique using both of the practitioner’s arms isolate and to cause flexion to the shoulder, elbow, and to a lesser extent the wrist of the opponent. The technique is generally set in motion by the practitioner, using their same side hand, (i.e. to target the right hand he uses his own right hand) pinning the opponent's arm to the ground at the wrist, so that the elbow falls at a right angle with the palm facing upwards. Subsequently, the practitioner will thread his opposite hand under the opponent’s bicep, reach through and grasp his own wrist, doing so creates the signature “figure four,” from which one name for this technique was derived, this also gives the practitioner a mechanical advantage over the opponent. To finish the submission the practitioner slides the wrist of the opponent toward the lower body, while simultaneously elevating the elbow and forearm, in a motion resembling using a paintbrush, creating opposition to the joints and causing the necessary flexion in the shoulder and elbow to cause significant pain, and damage if the opponent fails to submit. While it is feasible to execute this technique from several different positions, the most commonly utilized are the full mount and the side mount positions, most likely because these afford the greatest opportunity to isolate an opponent’s arm. This technique also has numerous variations with their own nomenclature, for instance depending on the rotational direction the arm, the addition of the word "reverse" signifying medial rotation as in reverse keylock or reverse ude-garami, in which case the usage of "keylock" indicates lateral rotation only. 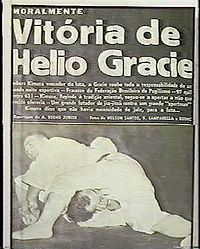 Kimura (Brazilian Jiu-Jitsu), chicken wing/double wristlock (wrestling), or reverse keylock are terms used to specify a medial keylock known in judo as gyaku ude-garami (reverse arm entanglement) or simply as ude-garami. The application is similar to the americana, except that it is reversed. It needs some space behind the opponent to be effective, and can be applied from the side control or guard. Contrary to the americana, the opponent's wrist is grabbed with the hand on the same side, and the opposite arm is put behind the opponent's arm, again grabbing the attacker's wrist and forming a figure-four. By controlling the opponent's body and cranking the arm away from the attacker, pressure is put on the shoulder joint, and depending on the angle, also the elbow joint (in some variations the opponent's arm is brought behind their back, resulting in a finishing position resembling that of the hammerlock outlined below). The kimura was named after the judoka Masahiko Kimura, who used it to defeat one of the founders of Brazilian Jiu-Jitsu, Hélio Gracie.

The "Shoulder Lock" is a technique used as a method of upper body restraint. It should not be confused with a choke because the lock does not block or interferes with the flow of air or oxygen to the brain. The application is executed by applying pressure between the radial bone and shoulder.

Not to be confused with the Gogoplata. 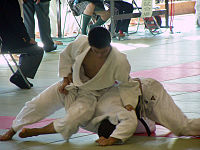 The omoplata (referred to in Judo as ude-garami or sankaku-garami, 三角緘, "triangular entanglement"[4][5] or ashi-garami, "leg entanglement"[6]) is also a commonly featured shoulder lock in Brazilian Jiu-Jitsu. The locking mechanism is similar to the kimura lock, but instead of using a figure-four, it is applied using a leg. The omoplata can be applied from the guard, by placing one leg under the opponent's armpit and turning 180 degrees in the direction of that leg, so that the leg moves over the back of the opponent and entangles the opponent's arm. By controlling the opponent's body and pushing the arm perpendicularly away from the opponents back, pressure can be put on the opponent's shoulder. It is also possible to put pressure on the elbow joint by bending the leg entangling the arm, and twisting it in a specific manner. Though an effective lock, it is more difficult than other armlocks to successfully apply. The technique called a monoplata is a similar armlock that resembles juji gatame or spiderweb position yet has a mechanism like a omoplata.

Tsunetane Oda, a judo groundwork specialist who died in 1955,[7] was shown on video to have demonstrated the technique.[8] 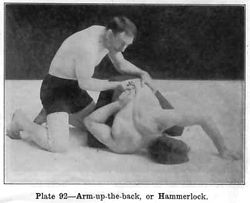 A hammerlock as demonstrated in Farmer Burns correspondence course, 1913

A hammerlock is a shoulder lock similar to the kimura lock where the opponent's arm is held bent against their back, and their hand forced upwards towards the neck, thereby applying pressure to the shoulder joint. The hammerlock is well-known as a pain compliance hold in law-enforcement where it is typically used from a stand-up position to control an aggressor, and is also utilized in the application of handcuffs. It is also sometimes seen used as a submission hold in submission wrestling arts. In physical assessments it is similar to the "Inferior Apley's Scratch" test that health practitioners may use for rotator cuff pathologies (Vizniak, 2009).