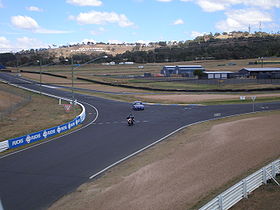 The public entrance to the Circuit at Murray's Corner

Mount Panorama Circuit (or often simply Bathurst) is a motor racing track located in Bathurst, New South Wales, Australia. It is the home of the Bathurst 12 Hour motor race, held each February, and the Bathurst 1000 motor race, held each October. The track is 6.213 km (4 mi) long, and is technically a street circuit, as the circuit is a public road when no racing events are being run, and there are many residences which can only be accessed from the circuit.

The track is an unusual design by modern standards, with a 174 metre (570 foot) vertical difference between its highest and lowest points, and grades as steep as 1:6.13. From the start-finish line, the track can be viewed in three sections; the short pit straight and then a tight left turn into the long, steep Mountain straight; the tight, narrow section across the top of the mountain itself; and then the long, downhill section of Conrod Straight, with the very fast Chase and the turn back onto pit straight to complete the lap.

Historically, the racetrack has been used for a wide variety of racing categories, including everything from open-wheel racers to motorcycles. However, the factors that make the track so unusual, and tighter contemporary safety standards, make it unlikely that major race meetings in these categories will be held there again, and as such it has become the near-exclusive province of closed-bodied automobile racing cars.

As a public road, on non-race days and when it is not closed off during the day as part of a racing event, Mount Panorama is open to the public. Cars can drive in both directions around the circuit for no charge. However, a strict speed limit of 60 km/h (37 mph) is enforced, and police regularly patrol the circuit.

The Pit straight of Mount Panorama, which is adjacent to the pit complex, has a different start line and finish line. For the standing start only, the start line is 143m closer to Hell Corner so that all the pit bays are located after the finish line for lap counting purposes. The start line is located where it is so that traffic does not go too far around Murray's Corner when the start grid is formed.

The common misperception of nomenclature due to the accidents that happen at this turn are widespread. Hell Corner was so named after the tree stump that existed on the apex of turn one, it was believed that any motor bike riders who hit the stump would die in an act of folly and thereby be doomed to an eternity of death having no time to repent of their sin.[citation needed]

Mountain Straight is a long straight that begins the climb up the mountain towards Griffins Bend. V8 Supercars reach speeds up to 250 km/h (155 mph) as drivers race over the crest immediately prior to braking for Griffins Bend. In the days before modern aerodynamics, drivers would have to lift off the throttle to prevent becoming airborne over the crest halfway up the straight.

Also known as GTX Bend (the corner's first sponsor), Griffins Bend was named after the Mayor of Bathurst whose vision it was to create the scenic road/race-track. Drivers heading around this right-hander have to be careful not to drift too far out of this negatively-cambered turn and hit the wall upon exit. Before called GTX bend this corner was known as Castrol curve circa early 70's

Referred to for many years as "BP Cutting", this is a pair of left hand corners, leading into a steep 1:6 grade exit. Overtaking is virtually impossible here, and it is very hard to recover from a spin here because of the narrow room and steep gradient. This corner was the location of the infamous 'race rage' incident between Marcos Ambrose and Greg Murphy, after Murphy and Ambrose collided when both drivers refused to give the other "racing room" during the 2005 Supercheap Auto 1000, Ambrose's last before he moved to the United States for racing. Murphy then disappeared into a resident's house to view the replays on TV before returning to the pits.[citation needed]

After exiting the Cutting, drivers have a right hand turn, heading up, then into a left hand turn. This is Reid Park. The most famous incident in the history of the Bathurst 1000[citation needed] was here when Dick Johnson crashed his Ford Falcon in the early laps of the 1980 Hardie-Ferodo 1000 race avoiding a large rock that had fallen from the spectator area. The car was destroyed, taking with it Johnson's means of supporting his racing ambitions. An emotional public appeal followed during the race's telecast which re-launched Johnson's career and restored flagging public interest[citation needed] in touring car racing.

After Reid Park, drivers brave a steep drop, flowing into a climbing left hand turn, heading back towards the highest point of Mount Panorama. This is also the location of Sulman Park and its Nature Park. Jason Bright crashed here in his Ford Falcon in practice during the 1998 FAI 1000, then saw the car rebuilt in time to scrape into qualifying in the dying minutes before Bright and Steven Richards went on to victory. This corner was also the scene of a shocking crash in a support race in 2006 that claimed the life of Mark Porter.

McPhillamy Park is a downhill, deceptively fast left hand turn which is guarded by a crest prior to turn-in, rendering the corner blind to approaching drivers. Drivers have to stay close to the wall while turning so as not to go out wide upon exit. To go too close however may cause the car to clip the inside kerbing, which Allan Moffat famously did in practice for the 1986 James Hardie 1000, crashing heavily, head on to the concrete. McPhillamy Park is the location of longest running campsite for those who camp at the track for sometimes over a week ahead of the race.

A short straight connects McPhillamy to the next corner. Now named 'Brock's Skyline' after the legendary Peter Brock, Skyline is a sharply descending right hand corner which signifies the beginning of the descent from the top of the Mountain. The corner acquired the name from the visual effect of looking upwards at the corner from below, such is the sharpness of that initial plunge. During the 1970 Hardie-Ferodo 500 Tony Roberts launched over Skyline backwards after losing control of his Ford Falcon, before tumbling down the hillside.

The Esses are the series of corners which begin at Skyline and stretch down the Mountain towards Forrests Elbow. There have been many notable accidents at this part of the circuit, including a blockage of the track in 2003 when Jason Bargwanna made contact with David Brabham.

The most famous of the Esses, the Dipper, the fourth in the sequence, is a sharp left hand corner, so named because, before safety changes, there was quite a dip in the road surface and then a steep drop not far from the edge of the road. Many cars used to get two wheels off the ground, sometimes having their left front wheel dangling off the side of the track before the concrete walls were put up. 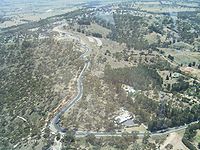 The summit, looking from Forrest's Elbow to Skyline and beyond.

'The Elbow' – named after Jack Forrest, a motorcycle racer who scraped his elbow away after laying down his bike – is a slow, descending left-hand turn that leads on to the long Conrod Straight. The corner's line drifts towards the outside wall on exit and drivers have to be careful of getting too close. It was just past here,at the kink, during the pole qualifying session (the top ten drivers from Friday's qualifying session participate in a final session to determine the top ten starting positions for the race) for to the 1983 James Hardie 1000, that Dick Johnson clipped a tyre barrier just after exiting the corner, which sent his Ford Falcon careening into a grove of trees, demolishing the car.

Formerly known as Main Straight, Conrod Straight was so named because of a con-rod failure that ended the 1939 Easter race of Frank Kleinig in his Kleinig/Hudson race-car. Conrod Straight is the fastest section of Mount Panorama, with today's V8 Supercars just reaching 300 km/h (186 mph). The straight is a roller-coaster ride featuring two distinct crests, the second of which was rebuilt in 1987. It has been on Conrod where five of the six car-racing deaths on the circuit have occurred – Bevan Gibson, Tom Sulman, Mike Burgmann, Denny Hulme and Don Watson. All except Hulme (heart attack) died in high-speed accidents. However, the chicane introduced into Conrod Straight has made it one of the fastest turns in the world. Most drivers arrive at the initial part of the chicane at over 290 km/h (180 mph). 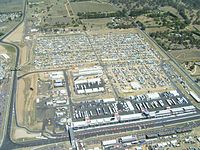 The Chase, Murray's corner and the home straight

Known for many years as 'Caltex Chase', this three turn sequence was added in preparation for the World Touring Car Championship round in 1987 as Con-Rod Straight exceeded the FIA's length for an un-broken straight. The section was dedicated to Mike Burgmann who had died in an accident at the chicane's spot the previous year. It interrupts Con-Rod Straight with Australia's fastest right hand bend, descending to the right away from the dangerous crest prior to the spectator bridge, before a sharp 120 km/h (75 mph) left hand bend then second right hand corner returns the competitors to Con-Rod Straight for the blast down to Murray's Corner. This corner was the scene of Peter Brock's only rollover in his motor racing career when he rolled his Vauxhall Vectra during practice for the 1997 AMP Bathurst 1000.

Murray's Corner is the final corner before Pit Straight and the lowest point of the circuit. It is a 90 degree left hand turn, and is a favourite overtaking spot as drivers hold braking duels for the corner.

The fastest lap ever recorded at Mount Panorama was achieved in March 2011. As part of a publicity exercise for the 2011 Australian Grand Prix and for the team's sponsors Vodafone, McLaren brought a Formula One car for Jenson Button and Craig Lowndes to drive around the track. The fastest lap was recorded by Button at 1:48.88, but as it was not recorded during an official race it does not count as the official lap record.[1]

Lap records for the various racing classes are:

The very first race held at the Mount Panorama circuit was the 1938 Australian Grand Prix. Since that historic meeting 'the Mountain' has attracted some of the biggest races in the country. The Australian Grand Prix was held here four times (1938, 1947, 1952 and 1958) and the circuit also played host to the Australian motorcycle Grand Prix for a significant portion of pre-world championship life (1984-87). The Australian Tourist Trophy and the Australian Touring Car Championship also visited sporadically as well as numerous other Australian Championships. The circuit has been home to one of the world's classic endurance events, the Bathurst 1000 since 1963 (the race was 500 miles between 1963 and 1972 before being changed to its current 1000km format in 1973) as well as other races inspired by it, the Bathurst 12 Hour and now defunct Bathurst 24 Hour.

The first Motorsport event was a speed hillclimb held from Mountain Straight up to Reid Park. This event is still held today as a round of the NSW Hillclimb Championship.

In 2008, the circuit hosted the IGSA Gravity Sports World Championships: skateboard downhill and street luge downhill. The race began at Skyline and ended at Conrod Straight.

Sixteen competitors have died during racing associated with Mount Panorama. Two spectators were also killed in 1955 after being struck by a crashing car.