The Ohio High School Athletic Association (OHSAA) is the governing body of athletic programs for junior and senior high schools in the state of Ohio. The OHSAA governs eligibility of student athletes, resolves disputes, organizes levels of competition by divisional separation of schools according to attendance population, and conducts state championship competitions in all the OHSAA-sanctioned sports.

The Association is divided into six districts, each with its own District Athletic Board.

The Classifications (A being the smallest schools, AAA the largest) are still used to fill spots on the District Athletic Boards (2 representatives from each class).

The number of divisions vary based on how many schools offer that sport. Football has the most, with 6 divisions (Division 1 being the largest schools). 5 sports have a single division: Boys' Ice Hockey and Bowling, and Girls' Field Hockey, Bowling, and Gymnastics.

The OHSAA is an unincorporated, non-profit organization founded in 1907. Members of the Western Ohio Superintendents Round Table had frequently discussed the need of a central organization for high school athletics. In 1906 they passed a resolution to appoint a committee, headed by George R. Eastman, the first President of the Board of Control.

The first OHSAA sponsored state tournament, in Track and Field, was held on May 23, 1908 at Denison University. Columbus North became the first state champions, finishing ahead of Dayton Steele.[1] 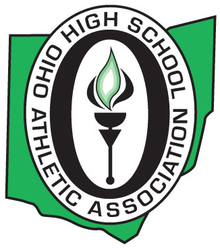 The original logo of the OHSAA

Prior to 1925, the Board of Control officers handled duties now associated with the Commissioner.

**(Individual/Doubles only, no Team championships)

Schools with most team titles

Schools with most team titles in one sport