The Cais are said to be the descendants of the 5th son of King Wen of the Zhou Dynasty (9th century BC – 256 BC), Ji Du 姬度. Ji Du was awarded the title of marquis (hóu) of the State of Cai (centered on what is now Shangcai, Zhumadian, Henan, China), and he was known as Cai Shudu ("Uncle Cai"). Together with Guan Shu and Huo Shu, they were known as the Three Guards. When King Wu died, his son King Cheng was too young and his uncle, the Duke of Zhou, became regent. Seeing that the power of the Duke of Zhou was increasing, the Three Guards got jealous and rebelled against Zhou together with Wu Geng. The Duke of Zhou suppressed the rebellion, and Cai Shu was exiled. King Cheng reestablished Cai Shu’s son Wu as the Duke of Cai. Some 600 years later in the Warring States Period, the State of Chu conquered Cai in 447 BC and was itself conquered by the Qin state which, in turn, formed the Qin Empire, China's first empire. With the spread of family names to all social classes in the new empire, many people of the former state of Cai began to bear it as a surname.

The Cai descendants have undertaken two major migrations. During the Huang Chao Rebellion (AD 875) at the end of the Tang Dynasty (AD 618-907), the Cai clan migrated to Guangdong and Fujian provinces. Another later migration occurred when Ming Dynasty loyalist Koxinga moved military officials surnamed Cai and their families to Taiwan in the 17th century. As a result, the surname is far more common in these areas and in areas settled by their descendants (e.g., Southeast Asia) than in other parts of China.

Cai is written the same (蔡) in both simplified and traditional Chinese characters.

In Mandarin Chinese, the surname is transliterated as Cài in pinyin and Tongyong Pinyin, Ts'ai in Wade-Giles, and Tsay in Gwoyeu Romatzyh. In Minnan or Taiwanese, it is Chhoà in Pe̍h-oē-jī. In Cantonese, it is Coi3 in Jyutping and Choi in Yale. (This should not be confused with the predominantly Korean family name Choi which has a different Chinese character [崔]). In Hakka it is Tshai in Pha̍k-fa-sṳ. (In Tongyong pinyin, it is Cai in Siyen Hakka and Ca̱i in Hoiliuk Hakka.) In Mindong, it is Chái (in Bàng-uâ-cê).

Cai is romanized as Cai in the People's Republic of China, Tsai (or occasionally Tsay or Chai) in the Republic of China (Taiwan), and Choi or Choy in Hong Kong. In Malaysia, Singapore, and Brunei, the most common forms are Chua for Hokkien and Teochew speakers, Chai for Hakka speakers, Choi for Cantonese speakers, and Toy or Toi for Taishanese speakers. In Indonesia it is usually romanized as Tjoa and in the Philippines it is Chua, Cua.

Other variations include Chye, Coi, and Tsoi.

In addition, some of the Chuas (Cais) who resided in the Philippines adopted Spanish names to avoid persecution by the Spanish rulers during the Philippines' Spanish colonial rule from the early 16th to late 19th century. Hispanicized forms of the name include Chuachiaco, Chuakay, Chuapoco, Chuaquico, Chuacuco, Chuateco, and Chuatoco.[4] These names were formed from the surname, one character of the given name, and the suffix "-co", a Minnan honorific ko (哥), literally meaning "older brother".[4]

In Thailand, most Thais of Chinese descendance use Thai surnames. Legislation by Siamese King Rama VI (1910-1925) required the adoption of Thai surnames which was largely directed at easing tensions with Chinese community by encouraging assimilation. Thai law did not (and does not) allow identical surnames to those already in existence[5], so ethnic Chinese formerly surnamed Chua incorporating words that sound like "Chua" and have good meaning (such as Chai, meaning "victory") into much longer surnames. 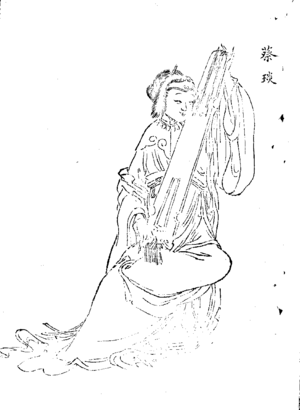