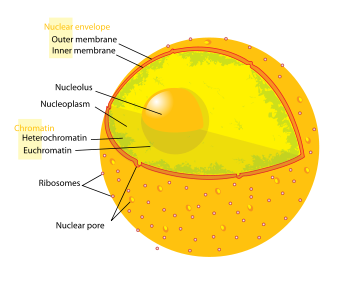 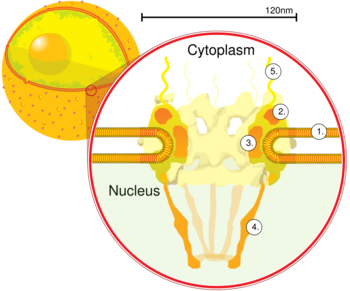 Nuclear pores are large protein complexes that cross the nuclear envelope, which is the double membrane surrounding the eukaryotic cell nucleus. There are about on average 2000 nuclear pore complexes in the nuclear envelope of a vertebrate cell, but it varies depending on cell type and the stage in the life cycle. The proteins that make up the nuclear pore complex are known as nucleoporins. About half of the nucleoporins typically contain either an alpha solenoid or a beta-propeller fold, or in some cases both as separate structural domains. Each NPC contains at least 456 individual protein molecules and is composed of 30 distinct proteins (nucleoporins).[1] The other half show structural characteristics typical of "natively unfolded" proteins, i.e. they are highly flexible proteins that lack ordered secondary structure.[2] These disordered proteins are the FG nucleoporins, so called because their amino-acid sequence contains many repeats of the peptide phenylalanine—glycine.[3]

Nuclear pore complexes allow the transport of water-soluble molecules across the nuclear envelope. This transport includes RNA and ribosomes moving from nucleus to the cytoplasm and proteins (such as DNA polymerase and lamins), carbohydrates, signal molecules and lipids moving into the nucleus. It is notable that the nuclear pore complex (NPC) can actively conduct 1000 translocations per complex per second. Although smaller molecules simply diffuse through the pores, larger molecules may be recognized by specific signal sequences and then be diffused with the help of nucleoporins into or out of the nucleus. This is known as the RAN cycle. Each of the eight protein subunits surrounding the actual pore (the outer ring) projects a spoke-shaped protein into the pore channel. The center of the pore often appears to contain a plug-like structure. It is yet unknown whether this corresponds to an actual plug or is merely cargo caught in transit.

The entire nuclear pore complex (NPC) has a diameter of about 120 nanometers, the diameter of the opening (functional diameter) is about 9 nanometers wide and its "depth" is about 200 nanometers.[citation needed] It had been suggested that the pore can be dilated to around 26 nanometers to allow molecule passage. The molecular mass of the mammalian NPC is about 120 megadaltons and it contains approximately 30 different protein components, each in multiple copies.[4] In contrast, the yeast model organism Saccharomyces cerevisiae is smaller, weighing only 66MDa.[5]

Transport through the nuclear pore complex 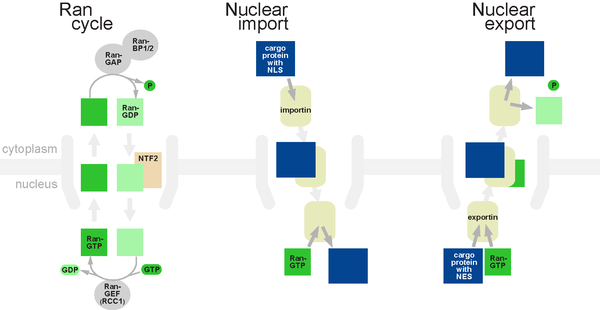 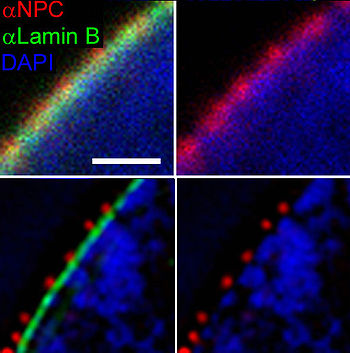 Three models have been suggested to explain the translocation mechanism:

Any cargo with a nuclear localization signal (NLS) exposed will be destined for quick and efficient transport through the pore. Several NLS sequences are known, generally containing a conserved polypeptide sequence with basic residues such as PKKKRKV. Any material with an NLS will be taken up by importins to the nucleus.

The classical scheme of NLS-protein importation begins with Importin-α first binding to the NLS sequence, and acts as a bridge for Importin-β to attach. The importinβ—importinα—cargo complex is then directed towards the nuclear pore and diffuses through it. Once the complex is in the nucleus, RanGTP binds to Importin-β and displaces it from the complex. Then the cellular apoptosis susceptibility protein (CAS), an exportin which in the nucleus is bound to RanGTP, displaces Importin-α from the cargo. The NLS-protein is thus free in the nucleoplasm. The Importinβ-RanGTP and Importinα-CAS-RanGTP complex diffuses back to the cytoplasm where GTPs are hydrolyzed to GDP leading to the release of Importinβ and Importinα which become available for a new NLS-protein import round.

Although cargo passes through the pore with the assistance of chaperone proteins, the translocation through the pore itself is not energy dependent. However, the whole import cycle needs the hydrolysis of 2 GTPs and is thus energy dependent and has to be considered as active transport. The import cycle is powered by the nucleo-cytoplasmic RanGTP gradient. This gradient arises from the exclusive nuclear localization of RanGEFs, proteins that exchange GDP to GTP on Ran molecules. Thus there is an elevated RanGTP concentration in the nucleus compared to the cytoplasm.

Some nuclear proteins need to be exported from the nucleus to the cytoplasm, as do ribosome subunits and messenger RNAs. Thus there is an export mechanism similar to the import mechanism.

In the classical export scheme, proteins with an nuclear export sequence (NES) can bind in the nucleus to form a heterotrimeric complex with an exportin and RanGTP (for example the exportin CRM1). The complex can then diffuse to the cytoplasm where GTP is hydrolysed and the NES-protein is released. CRM1-RanGDP diffuses back to the nucleus where GDP is exchanged to GTP by RanGEFs. This process is also energy dependent as it consumes one GTP. Export with the exportin CRM1 can be inhibited by Leptomycin B. llll

There are different export pathways through the NPC for each RNA class that exists. RNA export is also signal mediated (NES); the NES is in RNA-binding proteins (except for tRNA which has no adapter). It is notable that all viral RNAs and cellular RNAs (tRNA, rRNA, U snRNA, microRNA) except mRNA are dependent on RanGTP. Conseved mRNA export factors are necessary for mRNA nuclear export. Export factors are Mex67/Tap (large subunit) and Mtr2/p15 (small subunit).

Assembly of the NPC

As the NPC controls access to the genome, it is essential that it exists in large amounts in areas of the cell cycle where plenty of transcription is necessary. For example, cycling mammalian and yeast cells double the amount of NPC in the nucleus between the G1 and G2 phase of cell Mitosis. And oocytes accumulate large numbers of NPCs to prepare for the rapid mitosis that exists in the early stages of development. Interphase cells must also keep up a level of NPC generation to keep the levels of NPC in the cell constant as some may get damaged. Some cells can even increase the NPC numbers due to increased transcriptional demand.[9]

During mitosis the NPC appears to disassemble in stages. Peripheral nucleoporins such as the Nup 153 Nup 98 and Nup 214 disassociate from the NPC. The rest, which can be considered a scaffold proteins remain stable, as cylindrical ring complexes within the nuclear envelope. This disassembly of the NPC peripheral groups is largely thought to be phosphate driven, as several of these nucleoporins are phosphorylated during the stages of mitosis. However, the enzyme involved in the phosphorlyation is unknown in vivo. In metazoans (which undergo open mitosis) the NE degrades quickly after the loss of the peripheral Nups. The reason for this may be due to the change in the NPC’s architecture. This change may make the NPC more permeable to enzymes involved in the degradation of the NE such as cytoplasmic tubulin, as well as allowing the entry of key mitotic regulator proteins.

It was shown, in fungi that undergo closed mitosis (where the nucleus does not degrade), that the change of the permeability barrier of the NE was due to changes with in the NPC and is what allows the entry of mitotic regulators. In Aspergillus nidulans the NPC composition appears to be effected by the mitotic kinase NIMA, possibly by phosphorylating the nucleoporins Nup98 and Gle2/Rae1. This remodelling seems to allow the proteins complex cdc2/cyclinB enter the nucleus as well as many other proteins such as soluble tubulin. The NPC scaffold remains intact throughout the whole closed mitosis. This seems to preserve the integrity of the NE.