Nutcracker
This article is about the mechanical device. For the ballet, see The Nutcracker. For other uses, see Nutcracker (disambiguation).

A nutcracker with a functional design

A nutcracker is a mechanical device for cracking nuts. Usually they work on the principle of moments as described in Archimedes' analysis of the lever. The earliest use of the term nutcracker in English dates to 1481.

Manufacturers produce modern nutcrackers — designed to crack hazel or cob nuts — usually somewhat resembling pliers, but with the pivot point at the end beyond the nut, rather than in the middle. These are also used for cracking the shells of crab and lobster to make the meat inside available for eating.

Parrots use their beaks as natural nutcrackers, in much the same way smaller birds crack seeds. In this case, the pivot point stands opposite the nut, at the jaw. 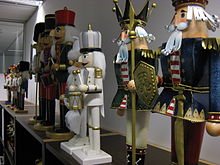 A collection of Nutcrackers 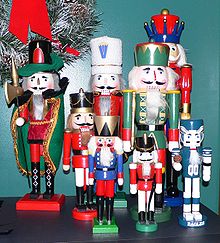 A variety of figure nutcrackers

Nutcrackers in the form of wooden carvings of a soldier, knight, king, or other profession have existed since at least the 15th century. These nutcrackers portray a person with a large mouth which the operator opens by lifting a lever in the back of the figurine. Originally one could insert a nut in the big-toothed mouth, press down and thereby crack the nut. Modern nutcrackers in this style serve mostly for decoration, mainly at Christmas time. The ballet The Nutcracker derives its name from this festive holiday decoration.

The carving of nutcrackers—as well as of religious figures and of cribs—developed as a cottage industry in forested rural areas of Germany. The most famous nutcracker carvings come from Sonneberg in Thuringia (also a center of dollmaking) and from the Ore Mountains. Wood-carving usually provided the only income for the people living there. Today the travel industry supplements their income by bringing visitors to the remote areas.

Steinbach Nutcrackers have become popular in the United States as well, and the recreated "Bavarian village" of Leavenworth, Washington, even features a nutcracker museum. Many other materials also serve to make decorated nutcrackers, such as porcelain, silver, and brass; the museum displays samples. 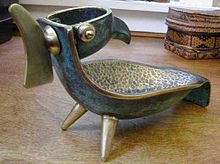