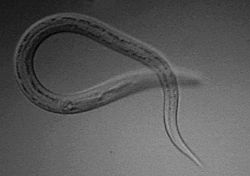 Infectious Necator americanus L3 larva.
Invisible to the naked eye, from 10 to 35 are applied to the skin in therapy, either in a single dose or in multiple smaller doses over the course of two or three months.

Helminthic therapy, a type of immunotherapy, is the treatment of autoimmune diseases and immune disorders by means of deliberate infestation with a helminth or with the ova of a helminth. Helminths are parasitic worms such as hookworms and whipworms.

Lack of exposure to naturally occurring pathogens and parasites may result in an increased incidence of autoimmune diseases. This is consistent with the hygiene hypothesis.[3][9] A complete explanation of how environmental factors play a role in autoimmune diseases has still not been proposed. However epidemiological studies, such as the meta analysis by Leonardi-Bee et al.,[3] have helped to establish the link between parasitic infestation and its protective role in autoimmune disease development.

Some recent research appears to confirm that the central tenet of the hygiene hypothesis is true — that parasites, and in particular helminths, have shaped the evolution of at least parts of the human immune system, and even the genes responsible for Crohn's disease, ulcerative colitis and celiac disease — and provides further evidence that it is the absence of parasites, and in particular helminths, that has caused a substantial portion of the increase in incidence of diseases of immune dysregulation and inflammation in industrialized countries in the last century.[10]

Although the mechanism of autoimmune disease development is not fully defined, there is broad agreement that the majority of autoimmune diseases are caused by inappropriate immunological responses to innocuous antigens, driven by a branch of the immune system known as the TH1 type immune response. Extra-cellular antigens primarily trigger the TH2 response, as observed with allergies, while intracellular antigens trigger a TH1 response. The relationship between these two types of immune response is a central theme of the hygiene hypothesis, which suggests that there is a regulatory action between the two types of response. However, the observation that allergies and autoimmune response are increasing at a similar rate in the industrialized nations appears to undermine the hygiene hypothesis.

A refinement of the hygiene hypothesis, which overcomes this apparent contradiction, is the "old friends hypothesis."[11] The old friends hypothesis modifies the hygiene hypothesis by proposing that T regulator cells can only become fully effective if they are stimulated by exposure to microorganisms and parasites that have low levels of pathogenicity, and which have coexisted universally with human beings throughout our evolutionary history. This theory has recently been given more credibility by a study demonstrating the impact of infectious organisms, and helminths in particular, upon genes responsible for the production of various cytokines, some involved in the regulation of inflammation, in particular those associated with the development of Crohn's Disease, ulcerative colitis, and celiac disease.[10]

The hygiene hypothesis proposes that appropriate immune response is in part learned by exposure to these microorganisms and parasites, and in part regulated by their presence. In the industrialised nations, humans are exposed to somewhat lower levels of these organisms. The development of vaccines, hygienic practices, and effective medical care have diminished or eliminated the prevalence and impact of many parasitic organisms, as well as bacterial and viral infections. This has been of obvious benefit with the effective eradication of many diseases that have plagued human beings. However, while many severe diseases have been eradicated, humans' exposure to benign and apparently beneficial parasites has also been reduced commensurately. The central thrust of the theory is, therefore, that correct development of T regulator cells in individuals may depend on exposure to organisms such as lactobacilli, various mycobacteria, and helminths.[6] Lack of exposure to sufficient benign antigens, particularly during childhood, is sometimes suggested as a cause of the increase in autoimmune diseases and diseases for which chronic inflammation is a major component in the industrialized world.

Helminthic therapy with both hookworm and TSO has been investigated in research published by the University of Nottingham[12] and University of Iowa.[13]

Hookworms have been found to reduce the risk of developing asthma, while Ascaris lumbricoides (roundworm infection) was associated with an increased risk of asthma.[3]

The authors of a study published in Science Magazine in April of 2011 suggest that there may be a link between the rising rates of metabolic syndrome in the developed worlds and the largely successful efforts of Westerners to eliminate intestinal parasites. The authors' work suggest that eosinophils (a type of white blood cell) in fat tissue play an important role in preventing insulin resistance by secreting interleukin 4, which in turn switches macrophages into "alternative activation." Alternatively activated macrophages are important to maintaining glucose homeostasis (i.e., blood sugar regulation). Helminth infection causes an increase in eosinophils. In the study, the authors fed rodents a high-fat diet in order to induce metabolic syndrome, and then injected them with helminths. Helminth infestation improved the rodents' metabolism. The authors concluded: "Although sparse in blood of persons in developed countries, eosinophils are often elevated in individuals in rural developing countries where intestinal parasitism is prevalent and metabolic syndrome rare. We speculate that eosinophils may have evolved to optimize metabolic homeostasis during chronic infections by ubiquitous intestinal parasites..."[21]