Shahid Masood Khan (Urdu: شاہد مسعود خان), commonly known as Dr. Shahid Masood, is one of the most famous Pakistani journalist, columnist, TV show host and a political analyst. He is the former President of ARY TV Network, Group Executive Director of Geo TV network and MD/Chairman of Pakistan Televion Corporation.He is considered as the great intellectual of Pakistan.[1] Currently, he is working as the Consultant at the Express Media Group and also hosts Shahid Nama on Express News.[2] Previously he has hosted famous shows Views on News on ARY News and Meray Mutabiq on GEO TV.

Shahid Masood spent most of his childhood in Taif and Riyadh, Saudi Arabia. His father was a civil engineer, who worked there for 15 years.[1] He attended the Pakistan International School, Riyadh, for seven years. HE attended Pakistan international school Riyadh, DJ science college Karachi and Sindh Medical College Karachi. 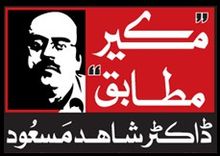 The opening screen for Meray Mutabiq.

In January 2007, Shahid Masood joined Geo TV,[4] which is owned by the Jang Group, the largest Urdu media group.
At GEO, he hosted the show, Meray Mutabiq (According to me). Due to his open criticism of the government and General Musharraf on the show, Masood became a problem for the regime.

In late 2007, GEO Television was banned by General Musharraf after the imposition of emergency rule. Masood returned to the air in the mid-April 2008, and hosted an interview with Asif Zardari. Just in a month he was banned again after interviewing (late)General Jamshaid Gulzar.[5]

Later on he took charge as MD and Chairman of PTV (state run TV) but due to his stance on the audit report he resigned and later was appointed as Advisor to Prime Minister (status of Federal Minister).[5] Soon afterwards he resigned from this post too.

After quitting his advisory post, Masood returned to GEO and once again started hosting his show, Meray Mutabiq. In late 2009 his show was banned again from Dubai but he continued broadcasting it from various locations. It resulted in attacks on GEO offices in Karachi.[6]

In mid 2010, Masood resumed his program Views on News on ARY News and served as Director of ARY[7] but after few months he was again trapped by the establishment, so when Sadderuddin Hashwani invited him to join the Hashoo Group for the launch of a new TV channel, Dr. Shahid left the TV screens.[8]

Masood returned to television on 18 July 2011, by starting a new show, Shahid Nama, on Express News.[2] His program is broadcasted from Monday to Thursday at 11 pm Pakistani Local Time.

On War on Terrorism

Ever since 9/11, Masood has been severely critical of the American-led War on Terrorism, although he never supported militancy or extremism.[3] He routinely tends to analyze important issues along controversial lines, such as the Afghanistan, Iran, Iraq and the 2006 Lebanon War. He was the only independent Pakistani journalist who was able to cover three major wars from the combat zones.[3]