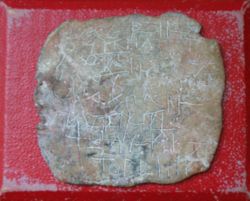 A curse tablet or binding spell (defixio in Latin, κατάδεσμος katadesmos in Greek) is a type of curse found throughout the Graeco-Roman world, in which someone would ask the gods to do harm to others.

These texts were typically scratched on very thin sheets of lead in tiny letters, then often rolled, folded, or pierced with nails. These bound tablets were then usually placed beneath the ground: either buried in graves or tombs, thrown into wells or pools, sequestered in underground sanctuaries, or nailed to the walls of temples. Tablets were also used for love spells and, when used in this manner they were placed inside the home of the desired target.[1] They are sometimes discovered along with small dolls or figurines (sometimes inaccurately referred to as "Voodoo dolls"[2]), which may also be pierced by nails. The figurines resembled the target and often had both their feet and hands bound.[3] Curse tablets also included hair or pieces of clothing. This is especially the case in love spells, which calls for “hair from the head of the love target.” Some love spells have even been discovered “folded around some hair,” probably to bind the spell itself .[4] “Not all tablets included a personal name, but it is clear especially in the Roman period, that tablets were sometimes prepared in advance, with space left for inserting the names provided by paying customers." [5]

The texts on curse tablets are typically addressed to infernal or liminal gods such as Hermes, Charon, Hecate, and Persephone, sometimes via the mediation of a dead person (probably the corpse in whose grave the tablet was deposited). Some texts do not invoke the gods, however, but merely list the targets of the curse, the crimes or conditions upon which the curse is valid, and/or the intended ill to befall them. Some tablets are inscribed with nothing more than the names of the targets, leading to the supposition that an oral spell may have accompanied the manufacture of the curse.[6] The texts on the tablets were not always curses; tablets were also used to help the dead. Those at whose grave sites these were placed had usually died at a very young age or in a violent manner, and the tablet was supposed to help lay their souls to rest in spite of their untimely deaths.[7] The language of those texts that do give context is often concerned with justice, either listing the target's crimes in great detail, handing over responsibility for their punishment to the gods, using indefinite grammar ("whoever committed this crime"), or conditional ("if he is guilty"), or even future conditional ("if he ever breaks his word").[citation needed]. Frequently, such curse tablets are also inscribed with additional, otherwise meaningless "curse" words such as Bazagra, Bescu, or Berebescu, seemingly in order to lend them a kind of supernatural efficacy.

About 130 curse tablets have been found at Aquae Sulis (now Bath in England), where many of the curses related to thefts of clothes whilst the victim was bathing.[9] Over 80 more have similarly been discovered in and about the remains of a temple to Mercury nearby, at West Hill, Uley,[10] making south-western Britain one of the major centres for finds of Latin defixiones.

In Ancient Egypt, so-called "Execration Texts" appear around the time of the 12th Dynasty, listing the names of enemies written on clay figurines or pottery which were then smashed and buried beneath a building under construction (so that they were symbolically "smothered"), or in a cemetery.[11]

Voces mysticae are words not immediately recognizable as belonging to any known language,[12] and are commonly associated with curse tablets. Anthropologist Stanely J. Tambiah proposed in 1968 that such words were intended to represent "the language that demons can understand".[12]

Scholars from antiquity, like Christian philosopher Clement of Alexandria (ca. 200 C.E.), believed that human language was not appropriate for addressing the gods.[13] Therefore, some of the inscriptions of these curse tablets are not easily translatable, because they were "invocations and secret names" which would only be understood by the spirits themselves.[13] Another possibility is that curse tablets were produced by professionals who wished to lend their art a degree of mystique through the use of an apparently secret language that only they could understand.[13] In support of this theory, at least some tablets appear to have blank spaces instead of a name for the target, suggesting they were prepared in advance, and that the desired target's name would be added on behalf of the customer.[13]

Magic was used by the people of the Greco-Roman society to control the natural.[14] All members of society, regardless of economic or class status, used such magic. There have been roughly 1600 curse tablets discovered, mostly written in Greek. Of those tablets, 220 were located in Attica.[15]

The first set of curse tablets to be discovered came from the city of Selinus in Sicily. A total of twenty-two tablets were found, mostly coming from the early fifth century, and directed toward someone that the user was suing.[16] While the ancient Greeks may have feared the power of these tablets, some historians[who?] have compared the tablets to modern swearing, arguing that they were produced in a fit of anger, in envy towards a business competitor or athletic opponent, or in an unhealthy obsession toward a person of romantic interest.

There is also debate over the type of women that men were trying to attract with these spells. Some scholars subscribe to the idea of men trying to make fair, chaste women become filled with desire for them, while others argue that men were trying to control women whom they thought to be sexually active for their own personal benefit.[19] Christopher A. Faraone considered the spells to fall into two distinct categories; spells used for inducing passion and spells used for encouraging affection.[20] Men, according to Faraone, were the primary users of the passion-inducing spells, while women were the main users of the affection spells.