The Media Research Center (MRC) is a content analysis organization based in Alexandria, Virginia, founded in 1987 by conservative activist L. Brent Bozell III. Its stated mission is to "prove — through sound scientific research — that liberal bias in the media does exist and undermines traditional American values" and to "neutralize [that bias's] impact on the American political scene".[1] 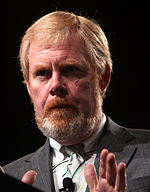 Bozell and a group of other young conservatives founded the MRC on October 1, 1987, with only themselves, a black-and-white television set, and rented computer at their headquarters. Their initial budget was at US$339,000.[1] Prior to founding the MRC, Bozell was the chairman of the National Conservative Political Action Committee; he resigned from that position a month before establishing MRC.[2]

The MRC has received financial support from several foundations, including the Bradley, Scaife, Olin, Castle Rock, Carthage and JM foundations.[citation needed] Bob Ward has said that it also receives funding from ExxonMobil.[3]

Reports on the media

From 1996 to 2009, the MRC published a daily online newsletter called CyberAlert written by editor Brent Baker. Each issue profiles what he perceives to be biased or inaccurate reports about politics in the American news media.[4] Prior to CyberAlert, MRC published such reports in a monthly newsletter titled MediaWatch,[5] from 1988 to 1999.[6] Media analysis articles are now under the banner BiasAlert.[7] Media analysis director Tim Graham and research director Rich Noyes regularly write Media Reality Check, another MRC publication documenting alleged liberal bias.[8] Notable Quotables is its "collection of the most biased quotes from journalists".[1] In Notable Quotables, editors give honors such as the "Linda Ellerbee Awards for Distinguished Reporting" based on the former CNN commentator, who Bozell considered "a liberal blowhard who has nothing to say".[9] Other features on its website include the weekly syndicated news and entertainment columns written by founder Bozell.

MRC staff members have also written editorials and books about their findings of the media. Bozell has written three books about the news media: And That's the Way it Isn't: A Reference Guide to Media Bias (1990, with Brent Baker); Weapons of Mass Distortion: The Coming Meltdown of the Liberal Media (2004); and Whitewash: How The News Media Are Paving Hillary Clinton's Path to the Presidency (2007, with Tim Graham). Research director Rich Noyes has also co-authored several published books.[10]

In 1992, the MRC created the Free Market Project to promote the culture of free enterprise and combat what it believes to be media spin on business and economic news. That division recently changed its name to the Business & Media Institute (www.businessandmedia.org) and is now focused on "Advancing the culture of free enterprise in America." BMI's advisory board includes such well-known individuals as economists Walter Williams and Bruce Bartlett, as well as former CNN anchor David Goodnow. BMI is led by career journalist Dan Gainor, a former managing editor at CQ.com, the website for Congressional Quarterly. It released a research report in June 2006 covering the portrayal of business on prime-time entertainment television during the May and November "sweeps" periods from 2005. The report concluded that the programs, among them the long-running NBC legal drama Law & Order, were biased against business.[11] Another report of the BMI accused the networks of bias in favor of the Gardasil vaccine, a vaccine intended to prevent cervical cancer.

In 1989, the MRC began monitoring the entertainment industry through its Entertainment Division and newsletter TV, etc.[12] MRC president L. Brent Bozell III branched out the Parents Television Council from the Center in 1995 after he felt that decency on prime-time television was decreasing. The PTC monitors prime-time television for what it believes to be indecent content and publishes content-based reviews of television shows and oversees campaigns to make advertisers withdraw from programs that they believe to be morally offensive.[13] Extra!, the magazine published by left-wing group Fairness and Accuracy in Reporting, asserted that the MRC's former newsletter TV, etc. inspired the group and "tracked the allegedly leftist politics of entertainment industry figures".[14] In July 2002, MRC and affiliate Parents Television Council (PTC) paid an out-of-court settlement ending a lawsuit which had been launched by World Wrestling Entertainment (WWE) in November 2000. WWE alleged 13 instances of defamation, copyright infringement and interference with prospective business relations after PTC produced a fundraising video using unauthorized WWE footage, falsely claimed WWE was responsible for the murders of four children, and falsely claimed advertisers had pulled their commercials from the show. MRC paid US$3.5 million.[15] MRC and PTC President Brent Bozell wrote in a lengthy public statement "it was wrong to have stated or implied that WWE or any of its programs caused these tragic deaths." [16] The PTC has been found to have filed the majority of complaints about alleged indecent television content to the Federal Communications Commission.[17]

Bozell founded the Conservative News Service (now Cybercast News Service [CNSNews.com]) in 1998 to cover stories he believes are ignored by mainstream news organizations.[18] CNSNews.com provides news articles for Townhall.com and other websites for a subscription fee. Its leadership consists of president Brent Bozell and editor Terry Jeffrey. Under editor David Thibault, CNSNews.com questioned the validity of the circumstances in which Democratic Rep. John Murtha received his purple hearts as a response to Murtha's criticisms of the U.S. War in Iraq. The Washington Post and Nancy Pelosi have commented that this approach is similar to the tactics of the Swift Vets and POWs for Truth, which opposed John Kerry's candidacy in the 2004 election.[19]

In the summer of 2005, Media Research Center launched the NewsBusters, a website "dedicated to exposing & combating liberal media bias," in cooperation with Matthew Sheffield, a conservative blogger involved in the CBS Killian documents story. NewsBusters is styled as a rapid-response blog site that contains posts by MRC editors to selected stories in mass media.[20] Although the site is advertised chiefly as a conservative site, it frequently defends Neoconservatives as well.[21] Not only does the site highlight journalists it deems to be liberally biased, but also non-journalists (writers, musicians, producers, scientists, etc.) who have a perceived liberal viewpoint.[22][23][24][25] In addition to conventional media outlets, NewsBusters has attacked Wikipedia over perceived liberal bias in its John Edwards discussion pages. [26] The site is also highly critical of moderate Republicans.[27][28]

At the NewsBusters site, a semi-weekly mock newscast called NewsBusted parodies recent events. The NewsBusted programs are often uploaded to sites such as YouTube.[29]

In October 2006, the MRC created the Culture and Media Institute, the mission of which is "to advance, preserve, and help restore America's culture, character, traditional values, and morals against the assault of the liberal media."[32] Robert H. Knight is the institute's director.

In its mission to show that there is a "strident liberal bias" [35] in the national news media, the MRC has produced a number of their own analyses and has offered as evidence the claims that news reporters use the "conservative" or "Republican" label to describe conservatives more often than they label liberals or Democrats, that the media is sympathetic to Communism or "dictators",[36][37] that media coverage of global warming is biased in favor of environmentalism,[38] and that the media focuses on covering the negative side of the Iraq war. In 1999, the MRC reported that the network news programs on ABC, CBS, and NBC largely ignored Chinese espionage in the United States during the Clinton administration.[39]

Beyond the news media, MRC also publishes research about entertainment television. Reports it conducted from 1993 to 1995 found that such programs made more references to religion each later year, most of which became more favorable.[40] In 2003, the MRC urged advertisers to pull sponsorship from The Reagans, a miniseries about President Ronald Reagan to be shown on CBS. The network later moved the program to its co-owned premium cable network Showtime.[41]

MRC released a report in 2007 claiming that the network morning shows devoted more airtime to covering Democratic presidential candidates than Republican ones for the 2008 election. Producers for such shows criticized the MRC's methodology as flawed.[42] During the 2008 US presidential election, MRC released a report claiming that the vast majority of news stories about Democratic presidential candidate Barack Obama had a positive slant.[43] MRC president Bozell praised MSNBC for having David Gregory replace Chris Matthews and Keith Olbermann as political coverage anchor beginning September 8, 2008, but MSNBC president Phil Griffin disputed the statements by Bozell and others who have accused the network of liberal bias.[44]

Extra!, the magazine of the progressive media watch group FAIR, criticized the MRC in 1998 for selective use of evidence. MRC had said that there was more coverage of government death squads in right-wing El Salvador than in left-wing Nicaragua in the 1980s, when Amnesty International stated El Salvador was worse than Nicaragua when it came to extrajudicial killings. Extra! also likened a defunct MRC newsletter TV etc., which tracked the off-screen political comments of actors, to "Red Channels, the McCarthy Era blacklisting journal."[14]

Journalist Brian Montopoli of Columbia Journalism Review in 2005 labeled MRC "just one part of a wider movement by the far right to demonize corporate media" rather than "make the media better." Additionally, Montpoli wrote that "false equivalence is at the very root of MRC’s beliefs."[45]

In July of 2010, Dan Gainor, VP of Business and Culture for Media Research Center, sparked a minor controversy by publishing a Tweet in which he offered $100 to the "first Rep. who punches smary [sic] idiot Alan Grayson in the nose." [46]