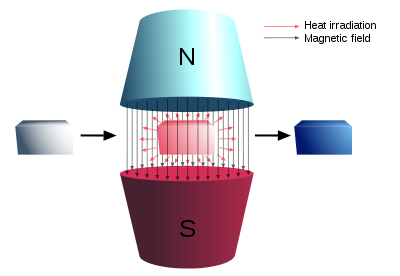 Gadolinium alloy heats up inside the magnetic field and loses thermal energy to the environment, so it exits the field cooler than when it entered.

Magnetic refrigeration is a cooling technology based on the magnetocaloric effect. This technique can be used to attain extremely low temperatures (well below 1 K), as well as the ranges used in common refrigerators, depending on the design of the system.

The effect was first observed by the German physicist Emil Warburg (1880) and the fundamental principle was suggested by Debye (1926) and Giauque (1927).[1] The first working magnetic refrigerators were constructed by several groups beginning in 1933. Magnetic refrigeration was the first method developed for cooling below about 0.3 K (a temperature attainable by 3He refrigeration, that is pumping on the 3He vapors).

The magnetocaloric effect (MCE, from magnet and calorie) is a magneto-thermodynamic phenomenon in which a reversible change in temperature of a suitable material is caused by exposing the material to a changing magnetic field. This is also known by low temperature physicists as adiabatic demagnetization, due to the application of the process specifically to create a temperature drop. In that part of the overall refrigeration process, a decrease in the strength of an externally applied magnetic field allows the magnetic domains of a chosen (magnetocaloric) material to become disoriented from the magnetic field by the agitating action of the thermal energy (phonons) present in the material. If the material is isolated so that no energy is allowed to (re)migrate into the material during this time, i.e., an adiabatic process, the temperature drops as the domains absorb the thermal energy to perform their reorientation. The randomization of the domains occurs in a similar fashion to the randomization at the curie temperature, except that magnetic dipoles overcome a decreasing external magnetic field while energy remains constant, instead of magnetic domains being disrupted from internal ferromagnetism as energy is added.

One of the most notable examples of the magnetocaloric effect is in the chemical element gadolinium and some of its alloys. Gadolinium's temperature is observed to increase when it enters certain magnetic fields. When it leaves the magnetic field, the temperature drops. The effect is considerably stronger for the gadolinium alloy Gd5(Si2Ge2).[2] Praseodymium alloyed with nickel (PrNi5) has such a strong magnetocaloric effect that it has allowed scientists to approach within one thousandth of a degree of absolute zero.[3]

The cycle is performed as a refrigeration cycle, analogous to the Carnot cycle, and can be described at a starting point whereby the chosen working substance is introduced into a magnetic field, i.e., the magnetic flux density is increased. The working material is the refrigerant, and starts in thermal equilibrium with the refrigerated environment.

Once the refrigerant and refrigerated environment are in thermal equilibrium, the cycle begins again.

The magnetocaloric effect is an intrinsic property of a magnetic solid. This thermal response of a solid to the application or removal of magnetic fields is maximized when the solid is near its magnetic ordering temperature.

Also, crystalline electric fields and pressure can have a substantial influence on magnetic entropy and adiabatic temperature changes.

Currently, alloys of gadolinium producing 3 to 4 K per tesla (K/T) of change in a magnetic field can be used for magnetic refrigeration.

Recent research on materials that exhibit a giant entropy change showed that Gd5(SixGe1−x)4, La(FexSi1−x)13Hx and MnFeP1−xAsx alloys, for example, are some of the most promising substitutes for gadolinium and its alloys — GdDy, GdTb, etc. These materials are called giant magnetocaloric effect materials (GMCE).

Gadolinium and its alloys are the best material available today for magnetic refrigeration near room temperature since they undergo second-order phase transitions which have no magnetic or thermal hysteresis involved.

The originally suggested refrigerant was a paramagnetic salt, such as cerium magnesium nitrate. The active magnetic dipoles in this case are those of the electron shells of the paramagnetic atoms.

In a paramagnetic salt ADR, the heat sink is usually provided by a pumped 4He (about 1.2 K) or 3He (about 0.3 K) cryostat. An easily attainable 1 T magnetic field is generally required for the initial magnetization. The minimum temperature attainable is determined by the self-magnetization tendencies of the chosen refrigerant salt, but temperatures from 1 to 100 mK are accessible. Dilution refrigerators had for many years supplanted paramagnetic salt ADRs, but interest in space-based and simple to use lab-ADRs has remained, due to the complexity and unreliability of the dilution refrigerator

Eventually paramagnetic salts become either diamagnetic or ferromagnetic, limiting the lowest temperature which can be reached using this method.

One variant of adiabatic demagnetization that continues to find substantial research application is nuclear demagnetization refrigeration (NDR). NDR follows the same principle described above, but in this case the cooling power arises from the magnetic dipoles of the nuclei of the refrigerant atoms, rather than their electron configurations. Since these dipoles are of much smaller magnitude, they are less prone to self-alignment and have lower intrinsic minimum fields. This allows NDR to cool the nuclear spin system to very low temperatures, often 1 µK or below. Unfortunately, the small magnitudes of nuclear magnetic dipoles also makes them less inclined to align to external fields. Magnetic fields of 3 teslas or greater are often needed for the initial magnetization step of NDR.

In NDR systems, the initial heat sink must sit at very low temperatures (10–100 mK). This precooling is often provided by the mixing chamber of a dilution refrigerator or a paramagnetic salt.

This refrigeration, once proven viable, could be used in any possible application where cooling, heating or power generation is used today. Since it is only at an early stage of development, there are several technical and efficiency issues that should be analyzed. The magnetocaloric refrigeration system is composed of pumps, electric motors, secondary fluids, heat exchangers of different types, magnets and magnetic materials. These processes are greatly affected by irreversibilities and should be adequately considered.

Appliances using this method could have a smaller environmental impact if the method is perfected and replaces hydrofluorocarbon (HFCs) refrigerators (some refrigerators still use HFCs which have considerable effect on the ozone layer. At present, however, the superconducting magnets that are used in the process have to themselves be cooled down to the temperature of liquid nitrogen, or with even colder, and relatively expensive, liquid helium. Considering these fluids have boiling points of 77.36 K and 4.22 K respectively, the technology is clearly not cost- and energy-efficient for home appliances, but for experimental, laboratory, and industrial use only.

Recent research on materials that exhibit a large entropy change showed that alloys are some of the most promising substitutes of gadolinium and its alloys — GdDy, GdTb, etc. Gadolinium and its alloys are the best material available today for magnetic refrigeration near room temperature. There are still some thermal and magnetic hysteresis problems to be solved for them to become truly useful [V. Provenzano, A.J. Shapiro, and R.D. Shull, Nature 429, 853 (2004)] and scientists are working hard to achieve this goal. Thermal hysteresis problems is solved therefore in adding ferrite (5:4).[citation needed]

Research and a demonstration proof of concept in 2001 succeeded in applying commercial-grade materials and permanent magnets at room temperatures to construct a magnetocaloric refrigerator which promises wide use.[4]

This technique has been used for many years in cryogenic systems for producing further cooling in systems already cooled to temperatures of 4 K and lower. In England, a company called Cambridge Magnetic Refrigeration produces cryogenic systems based on the magnetocaloric effect.

On August 20, 2007, the Risø National Laboratory at the Technical University of Denmark, claimed to have reached a milestone in their magnetic cooling research when they reported a temperature span of 8.7 C.[5] They hope to introduce the first commercial applications of the technology by 2010.

There are still some thermal and magnetic hysteresis problems to be solved for these first-order phase transition materials that exhibit the GMCE to become really useful; this is a subject of current research. A useful review on magnetocaloric materials published in 2005 is entitled "Recent developments in magnetocaloric materials" by Dr. Karl A. Gschneidner, et al.[6] This effect is currently being explored to produce better refrigeration techniques, especially for use in spacecraft. This technique is already used to achieve cryogenic temperatures in the laboratory setting (below 10K). As an object displaying MCE is moved into a magnetic field, the magnetic spins align, lowering the entropy. Moving that object out of the field allows the object to increase its entropy by absorbing heat from the environment and disordering the spins. In this way, heat can be taken from one area to another. Should materials be found to display this effect near room temperature, refrigeration without the need for compression may be possible, increasing energy efficiency.

The use of this technology for domestic refrigerators though is very remote due to the high efficiency of current Vapor-compression refrigeration cycles, which typically achieve performance coefficients of 60% of that of a theoretical ideal Carnot cycle.

This technology could eventually compete with other cryogenic heat pumps for gas liquefaction purposes.

The effect was discovered in pure iron in 1880 by German physicist Emil Warburg. Originally, the cooling effect varied between 0.5 to 2 K/T.

Major advances first appeared in the late 1920s when cooling via adiabatic demagnetization was independently proposed by two scientists, Peter Debye in 1926 and William Giauque in 1927.

This cooling technology was first demonstrated experimentally by chemist Nobel Laureate William F. Giauque and his colleague Dr. D.P. MacDougall in 1933 for cryogenic purposes when they reached 0.25 K.[8] Between 1933 and 1997, a number of advances in utilization of the MCE for cooling occurred. See Reviews:[9][10][11][12]

In 1997, the first near room temperature proof of concept magnetic refrigerator was demonstrated by Prof. Karl A. Gschneidner, Jr. by the Iowa State University at Ames Laboratory. This event attracted interest from scientists and companies worldwide who started developing new kinds of room temperature materials and magnetic refrigerator designs.[2] A major breakthrough came 2002 when a group at the University of Amsterdam demonstrated the giant magnetocaloric effect in MnFe(P,As) alloys that are based on earth abundant materials.[13]

Refrigerators based on the magnetocaloric effect have been demonstrated in laboratories, using magnetic fields starting at 0.6 T up to 10 T. Magnetic fields above 2 T are difficult to produce with permanent magnets and are produced by a superconducting magnet (1 T is about 20,000 times the Earth's magnetic field).

Some recent research has focused on the use of the process to perform refrigeration near "room temperature". Constructed examples of room temperature magnetic refrigerators are listed in the table below:

In one example, Prof. Karl A. Gschneidner, Jr. unveiled a proof of concept magnetic refrigerator near room temperature on February 20, 1997. He also announced the discovery of the giant MCE (GMCE) in Gd5Si2Ge2 on June 9, 1997 [27] (see below). Since then, hundreds of peer-reviewed articles have been written describing materials exhibiting magnetocaloric effects.