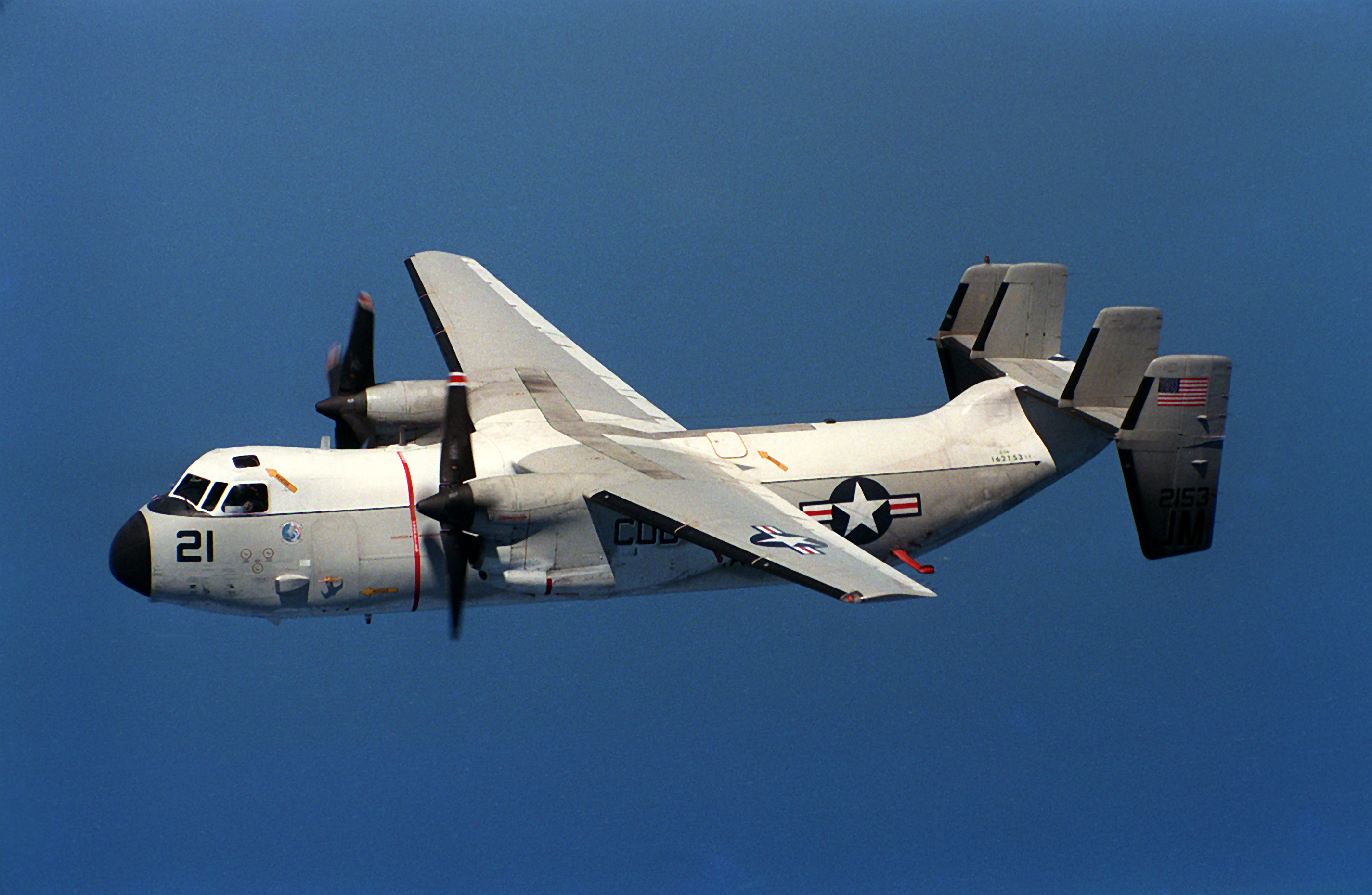 The C-2 Greyhound is a twin-engine , designed to provide critical logistics support to s of the . Its primary mission is (COD).

The C-2 Greyhound is a derivative of the and replaced the piston-engined in the Carrier Onboard Delivery role. The C-2 shares wings and power plants with the E-2 Hawkeye, but has a widened fuselage with a rear loading ramp. The first of two prototypes flew in and production began the following year. The original C-2A aircraft were overhauled to extend their operational life in .

In , a contract was awarded for 39 new C-2A aircraft to replace older airframes. Dubbed the Reprocured C-2A (C-2A(R)) due to the similarity to the original, the new aircraft includes substantial improvements in airframe and avionic systems. All the older C-2As were phased out in , and the last of the new models was delivered in .

Powered by two engines, the C-2A can deliver a payload of up to 10,000 pounds (4,500 kg). The cabin can readily accommodate cargo, passengers or both. It is also equipped to accept litter patients in medical evacuation missions. Priority cargo such as jet engines can be transported from shore to ship in a matter of hours. A cage system or transport stand provides cargo restraint for loads during carrier launch or landing.

The large aft cargo ramp and door and a powered winch allow straight-in rear cargo loading and unloading for fast turnaround. The C-2A's open-ramp flight capability allows of supplies and personnel from a carrier-launched aircraft. This, plus its folding wings and an on-board auxiliary power unit for engine starting and ground power self-sufficiency in remote areas, provide an operational versatility found in no other cargo aircraft.

Between November and February 1987 VR-24, operating with seven Reprocured C-2As, demonstrated the aircraft's exceptional operational readiness. The squadron delivered two million pounds (900 t) of cargo, two million pounds (900 t) of mail and 14,000 passengers in support of the European and Mediterranean theatres. The C-2A(R) also provided support to the carrier battle groups during Operations Desert Shield and Desert Storm, as well as currently during .

The entire fleet of 36 C-2A(R)s are currently undergoing a Critical Service Life Extension Program (SLEP) to extend their operational lifespan. The lifespan of the C-2A(R) was 10,000 hours total time, or 15,000 carrier landings; current plans require the C-2A to perform its mission supporting battle group operational readiness through 2015. The landing limit is quickly approaching for most of the airframes, and the SLEP will increase the Greyhound's projected life to 15,000 hours total time or 36,000 landings. Once the program is complete, it will allow the current 36 aircraft to operate until 2027. The SLEP includes a structural enhancement of the center wing, significant navigational upgrades including the addition of GPS and the dual CAINS II Navigation System, the addition of crash survivable flight incident recorders, and a . The first upgraded C-2A(R) left NAVAIR Depot North Island on September 12, 2005, after sitting on the ground for three and a half years while the SLEP was developed and installed. A second airframe is currently nearing completion and it is anticipated that the remaining 34 aircraft will all undergo the SLEP upgrade within the next five years as operations and schedule permit.

Though once considered being replaced by , the original plan failed to materialize. Currently, there are no plans to replace the C-2A(R) fleet, and no replacement aircraft are currently in development.