Dunhuang (Chinese: 敦煌; pinyin: Dūnhuáng, also as simplified Chinese: 炖煌; traditional Chinese: 燉煌; pinyin: Dūnhuáng in ancient times meaning 'Blazing Beacon') is a city (pop. 187,578 (2000)) in northwestern Gansu province, Western China. It was a major stop on the ancient Silk Road. It was also known at times as Shāzhōu (沙州), or 'City of Sands', a name still used today.[1] It is best known for the nearby Dunhuang Caves.

It is situated in a rich oasis containing Crescent Lake (月牙泉) and Mingsha Shan (鸣沙山, literally "Echoing-Sand Mountain"). Mingsha Shan is so named for the sound of the wind whipping off the dunes, the singing sand phenomenon.

It commands a very strategic position at the crossroads of the ancient Southern Silk Route and the main road leading from India via Lhasa to Mongolia and Southern Siberia,[1] as well as controlling the entrance to the narrow Gansu Corridor which led straight to the heart of the north Chinese plains and the ancient capitals of Chang'an (today known as Xi'an) and Luoyang.[2]

The ruins of a Han Dynasty (202 BC - 220 AD) Chinese watchtower made of rammed earth at Dunhuang, Gansu province, the eastern edge of the Silk Road

Dunhuang was one the frontier garrison towns established by Emperor Wu during the Han Dynasty. Following the Chinese victory over the Xiongnu in 121 BCE, the Chinese built fortifications at Dunhuang and sent settlers there. The name Dunhuang, or Blazing Beacon, refers to the beacons lit to warn of attacks by marauding nomadic tribes. Dunhuang Commandery was probably established in 104 BCE, or shortly thereafter.[3]

"The Great Wall was extended to Dunhuang, and a line of fortified beacon towers stretched westwards into the desert. By the second century AD Dunhuang had a population of more than 76,000 and was a key supply base for caravans that passed through the city: those setting out for the arduous trek across the desert loaded up with water and food supplies, and others arriving from the west gratefully looked upon the mirage-like sight of Dunhuang's walls, which signified safety and comfort. Dunhuang prospered on the heavy flow of traffic. The first Buddhist caves in the Dunhuang area were hewn in 353."[4]

In later centuries, during the Han and Tang dynasties, it was a major point of communication between ancient China and Central Asia. Located in the western end of the Hexi Corridor near the historic junction of the Northern and Southern Silk Roads, it was a town of military importance. Although its name is mentioned as part of the homeland of the Yuezhi or "Rouzhi" (月氏) in the Shiji (史記), this mention has also been identified with an unrelated toponym, Dunhong. As a frontier town, it was fought over and occupied at various times by non-Han Chinese nationalities such as the Tibetans and the Tanguts. 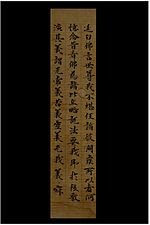 Early Buddhist monks arrived at Dunhuang via the ancient Northern Silk Road, the northernmost route of about 2,600 kilometres (1,600 mi) in length, which connected the ancient Chinese capital of Xi'an westward over the Wushao Ling Pass to Wuwei and on to Kashgar.[5] For centuries, Buddhist monks at Dunhuang collected scriptures from the West, and many pilgrims passed through the area, painting murals inside the Mogao Caves or "Caves of a Thousand Buddhas."[6] A small number of Christian artifacts have also been found in the caves (see Jesus Sutras), testimony to the wide variety of people who made their way along the Silk Road.

Today, the site is an important tourist attraction and the subject of an ongoing archaeological project. A large number of manuscripts and artifacts retrieved at Dunhuang have been digitized and made publicly available via the International Dunhuang Project.[7] The expansion of the Kumtag Desert, which is resulting from long-standing overgrazing of surrounding lands, has reached the edges of the city.[8] The city is also the namesake of prominent Chinese e-commerce site DHgate.com (simplified Chinese: 敦煌网; pinyin: Dūnhuángwǎng).

In 2011, satellite images showing huge structures in the desert near Dunhuang surfaced online and caused a brief media stir[9].

Dunhuang, being surrounded by high mountains, has an arid, continental climate. The annual average temperature is 9.48 °C (49.1 °F), but the monthly daily mean temperature ranges from 24.6 °C (76.3 °F) in July down to −8.3 °C (17.1 °F) in January. The city is extremely hot in summer and cold in winter, and usually has sharp temperature differences between day and night. Precipitation occurs only in trace amounts and quickly evaporates.[10]