The North Liverpool Extension Line is a now-disused railway line in Liverpool, England. The line was to be the eastern section of the Merseyrail Outer Loop. A line that circled the city.

The line was built by the Cheshire Lines Committee, branching from the Committee's Liverpool to Manchester line at Hunts Cross in the south of the city, running north skirting the eastern edge of Liverpool, finally arriving at the Walton Triangle junction. One line continued north to Aintree, another turned west through the Rice Lane to Kirkdale tunnel towards Liverpool Docks. Running alongside the already existsing LYR line before terminating at Huskisson railway station just after Sandhills railway station. A small line left Huskisson retracing the route North before turning towards the river and the Midland Railways Sandon Docks good station. The line opened between 1879 and 1880.

The Aintree branch was extended to Southport in 1884.

The route closed in stages. In 1960 the line closed to passengers between Aintree and Gateacre.

In 1972 passenger trains from Liverpool Central High Level to Gateacre were withdrawn. The Gateacre service was proposed to be reinstated in 1978, with the station being the terminus of the new Merseyrail Northern Line. However, this never materialised with the terminus being cut back to Hunts Cross station on the southern Liverpool to Manchester line. The line continued to carry freight being lifted in 1979. The trackbed of the main section of line now forms part of the National Cycle Network Route 62, the Trans Pennine Trail. 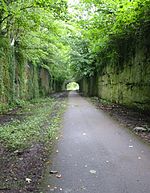 Proposals existed to reopen and electrify the line and form the eastern section of the Liverpool Outer Loop Merseyrail city circle. This section would run from Hunts Cross to Gateacre continuing north onto Broad Green, which would then turn west into Liverpool city centre. Parliamentary approval for the plans was obtained in 1975. However, this never materialised.

The line is protected for future use.[1] 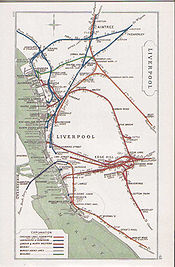 A 1909 Map showing some of the lines to be reused

The Cheshire Lines Committee put forward several plans to connect railway lines to Liverpool Docks via the extension. One of these was the Liverpool, St Helens & South Lancashire Railway.