Arturo Gatti was a member of the Canadian National team, and was training to represent Canada at the 1992 Summer Games, but at age 19 (in 1991), he decided to turn pro instead.[2][9] He began boxing professionally on the night of November 17, 1992.

His next fight, on March 24, 1993, was his first fight abroad, where he visited Amsterdam, Netherlands and knocked out Plawen Goutchev in round one.

In 1994, he beat Leon Bostic, and followed through with a win over Pete Taliaferro to win the USBA super featherweight title, by a knockout in round one. He retained the title against Richard Salazar and former world champion Jose Sanabria.

He only had two fights in 1996, once defending his world title. His title defense, at Madison Square Garden against Dominican Wilson Rodriguez was the first of three Gatti fights in a row to be named a candidate for "fight of the year" by Ring Magazine. Dropped in round two and with his right eye closing fast, Gatti knocked Rodriguez down in round five with a left hook to the body, before finishing him off in round six to retain the title.

In 1997, he again won a points victory over Patterson, but this time by a larger margin (118–108, 117–109, 116–110). He then scored a technical knockout over former world champion Calvin Grove in round seven of a non-title affair. Then came his defense against former world champion Gabriel Ruelas, which was also named "fight of the year" by Ring Magazine. Rocked by a left uppercut in the fourth, Gatti absorbed more than 15 consecutive punches before being saved by the bell. In the fifth, he connected on a left hook to knock Ruelas out.

To the lightweight division

After that fight, Gatti relinquished the world title, going up in weight to the lightweight division. However, 1998 was a bad year for Gatti, as he lost all three of his fights that year. He lost by a technical knockout in round eight to Angel Manfredy, and then lost a pair of close decisions in 10 rounds to Ivan Robinson. Gatti-Robinson I was chosen "fight of the year" by Ring Magazine, thus marking the second year in a row that a Gatti fight was given that award, and the third year in a row a Gatti fight was nominated.

He only had one fight in 1999, knocking out Reyes Munoz in round one.

Gatti's first fight of 2000 proved to be controversial. Faced with former world champion Joey Gamache, Gatti won by a knockout in round two. A subsequent lawsuit by Gamache's handlers claimed Gatti had gained 19 pounds since the weigh-in the day before and thus had a large advantage over Gamache.[10] In the wake of the fight, boxing regulators pushed for a new law limiting the amount of weight a competitor can gain between the weigh-in and time of the fight. Gatti was also accused by Gamache's handlers of not having actually made the contracted weight of 141 pounds. After Gatti-Gamache, some boxing commissions started weighing boxers a second time.

Gatti also won his two other fights that year. 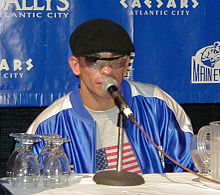 Gatti at the post-fight press conference on June 7, 2003

In 2001, Gatti only had one fight, going up in weight to meet welterweight Oscar de la Hoya, who beat him by a technical knockout in five rounds. In 2002, Gatti returned to the junior welterweight division and defeated former world champion Terronn Millett by a knockout in round four.

He then split two ten round decisions with "Irish" Micky Ward, losing their first bout, but winning their second. Gatti-Ward I also earned "fight of the year" honors by Ring Magazine and the 9th round was called the Round of the Century by Emanuel Steward.

On June 7, 2003, he and Ward had a rubber match. Gatti broke his twice-repaired right hand on an uppercut to the hip in the fourth, and he dropped his arm. In the sixth, Gatti dominated the round but got caught with an overhand right to the top of the head a second before the bell rang and went down. The final scorecards read, 96–93, 96–93, and 97–92, in favor of Gatti. The third fight between the two was again named "fight of the year" by Ring Magazine.

On January 24, 2004, Gatti also recovered from a broken hand, scored a tenth round knock-down and defeated Gianluca Branco of Italy by a 12 round unanimous decision to win the vacant WBC junior welterweight title.

On July 24, 2004, he knocked out the previously unbeaten former world champion Leonard Dorin Doroftei in two rounds at Atlantic City, to retain his title.

In his next fight, Gatti fought former super featherweight and lightweight world champion Floyd Mayweather Jr. on June 25, 2005. He took a horrific beating and Gatti's corner man threw in the towel after he was beaten around the ring, thus ending his title reign via sixth-round technical knockout.

After the loss to Mayweather, Gatti moved up to the welterweight division. He beat Thomas Damgaard on January 28, 2006, by an eleventh round technical knockout to win the vacant IBA welterweight title and became a champion in 3 different weight divisions.

On July 22, 2006, Gatti lost by a TKO Carlos Baldomir vying for the world welterweight championship. He then broke off his relationship with Buddy McGirt and had a new trainer in Micky Ward.

Gatti attempted a comeback on July 14, 2007, against Alfonso Gomez, only to get TKO'd by Gomez. After the fight, Gatti announced his retirement in the dressing room, reportedly quipping: "I'll be back — as a spectator".

Gatti retired with a record of 40 wins and 9 losses, with 31 wins by knockout. On September 24, 2008, reports had surfaced that Gatti was considering a comeback against Montreal welterweight Antonin Decarie (now 25–1), the Canadian and North American Boxing Organization champion.[11]

On July 11, 2009, Gatti was found dead in a hotel in Ipojuca, Pernambuco, Brazil, where he was on vacation with his Brazilian wife, Amanda Rodrigues, and their 10 month old son.[6][7][12] He was 37 years old. Gatti's widow was charged with first degree murder after the strap of her purse was found stained with blood. Gatti was to attend his sister's wedding the same day.[13] Rodrigues could not explain how she spent more than 10 hours in the hotel room without realizing Gatti was dead. Former boxing champion Acelino Freitas, who was a close friend of Gatti, claimed Gatti and Rodrigues were having problems and were about to separate.[14] On July 30, 2009, it was reported that the Brazilian police ruled Gatti's death as a suicide and his widow was released.[15][16] However, on July 31, 2009, it was announced that the Canadian government would be seeking more information from the Brazilian authorities on Gatti's death. Gatti's family has also confirmed that there would be a second autopsy done in Quebec.[17] On August 1, a pathologist hired by the ex-boxing champ's family said Brazilian authorities overlooked bruises on Gatti's body in the initial autopsy. Montreal medical examiners will perform further toxicology tests in Canada and are also awaiting more information on the scene of death from investigators in Brazil. "There were definite injuries that had not been seen by Brazilian authorities," Baden said.[18]

The Brazilian authorities initially ruled Gatti's death a homicide, but further studies revealed it was a suicide.[19] Yet, almost a year later, in March 2010, the circumstances concerning Gatti's death remain unclear.[20] All the reports are now at the Quebec coroner's office awaiting further investigation. Coroner Jean Brochu said, "We've been waiting for this for a long time," and "it's going to take a while" before conclusions can be made, and released to the public.[20] A shortage of staff at the coroner's office is being blamed for contributing to the delay of the investigation.[20] Regarding a new toxicology report being prepared, Brochu quipped that it "may take a century to get the results"."[20]

On August 23, 2011, it was reported that private investigators had concluded that Gatti's death was indeed a homicide.[21]