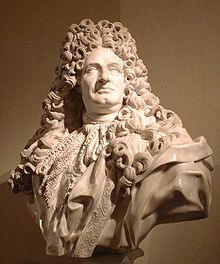 Jules Hardouin-Mansart (16 April 1646 – 11 May 1708) was a French architect whose work is generally considered to be the apex of French Baroque architecture, representing the power and grandeur of Louis XIV. Hardouin-Mansart was one of the most important European architects of the seventeenth century.

Born Jules Hardouin in Paris, he studied under his renowned great-uncle François Mansart, one of the originators of the classical tradition in French architecture; Hardouin inherited Mansart's collection of plans and drawings and adopted his well-regarded name. He also learned from Libéral Bruant, architect of the royal veteran's hospital in Paris known as Les Invalides. Hardouin-Mansart served as Louis XIV's chief architect, first enlarging the royal château of Saint-Germain-en-Laye, then at Versailles from 1675. He became the surintendant des Bâtiments du Roi (Superintendent of royal works). He designed all the extensions and rebuildings at Versailles for the King, including the north and south wings, the Royal Chapel (with Robert de Cotte, 1710), and the celebrated Hall of Mirrors decorated by Charles Le Brun, his collaborator. Outside the château proper, he built the Grand Trianon and the Orangerie, as well as subsidiary royal dwellings not far away, such as the Château de Marly (begun in 1679).

Among his other best-known works, in Paris, are the Pont-Royal, the Église Saint-Roch, the Invalides great domed royal chapel Église du Dôme des Invalides dedicated to Saint Louis (designed in 1680), the Place des Victoires (1684–86) followed by the Place Vendôme (1690). Most of these works still set their stamp on the character of Paris and can be seen by a modern-day tourist.

His most prominent position in France put him in place to create many of the significant monuments of the period, and to set the tone for the restrained French Late Baroque architectural style, somewhat chastened by academic detailing, that was influential as far as Saint Petersburg and even echoed in Constantinople. At the same time, the size of support staff in his official bureaucratic position has often raised criticisms that he was less than directly responsible for the work that was constructed under his name, criticisms that underestimate the discipline control within a large, classically-trained studio.

Château de Dampierre: a domesticated version of Baroque for a patron in Louis XIV's inner circle

Hardouin-Mansart used the mansard roof (mansarde), named for his great-uncle François Mansart, at the château of Dampiere-en-Yvelines, built for the duc de Chevreuse, Colbert's son-in-law, a patron at the center of Louis XIV's court. This French Baroque château of manageable size lies entre cour et jardin as even Versailles did, the paved and gravel forecourt (cour d'honneur) protected behind fine wrought iron double gates, and enclosed by the main block and its outbuildings (corps de logis), linked by balustrades, symmetrically disposed. A traditional French touch is the modest pedimented entrance flanked by boldly projecting pavilions. Behind, the central axis is extended between the former parterres, now grass. The park with formally shaped water was laid out by André Le Nôtre. There are sumptuous interiors. The small scale makes it easier to compare to the approximately contemporary Het Loo (Netherlands), for William III of Orange.