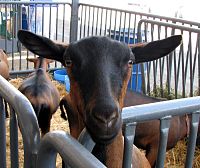 Closeup of the Oberhasli's distinctive coloration

The Oberhasli, also known until 1987 as the Swiss Alpine, is a very old breed of dairy goat from the eponymous district of the Canton of Berne in Switzerland.[1] Oberhaslis are a standardized color breed, with warm reddish brown accented with a black dorsal stripe, legs, belly, and face. Occasionally a black Oberhasli appears as a result of recessive genes. The American Dairy Goat Association (ADGA) considers black does acceptable and will allow them to be registered, but black bucks cannot be registered. The breed is about two inches smaller than the other standard-sized (nonminiature) breeds. Their temperament tends to be quiet and sweet natured, but alert, with vocalizing similar to the other Swiss-origin breeds. Does can be pushy with other does around feeding time, and in mixed breed herds will likely become herd queen. The Oberhasli record for milk production is recorded as 4,655 pounds of milk in one year.

This breed is still relatively rare in the United States. It was first imported in 1906, but these particular imported goats did not remain purely Oberhaslis.[1] In 1936, a Dr. H. O. Pence imported five purebred Oberhaslis to the United States, from which all purebred Oberhasli in North America are descended.[1] In 1978,[1] Oberhaslis were accepted as a breed by the ADGA. Because of its rarity and close similarity in type to the multi-coloured French Alpine goat, the Oberhasli registrations were lumped with the American Alpines. A small number of them were kept pure with records intact, and the breed was kept alive in America almost single-handedly by Esther Oman, a breeder in California.[citation needed]

The Oberhasli breed is growing in popularity at goat shows (competitions based on selection of animals on the basis of body conformation), as their docile nature is appreciated, along with the fine color, described as being 'like the wood on the back of a violin'. Contestants in showmanship classes are discovering the color is easier to keep clean than pure white animals. 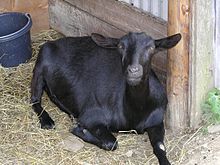 A variation of the breed, the black Oberhasli

This breed is a good choice for the person who wants dairy goats for milk, from hardy thrifty animals, who appreciates the vivid rust-red coloration, wants something slightly out of the ordinary, and likes the Swiss-type head (upright ears).