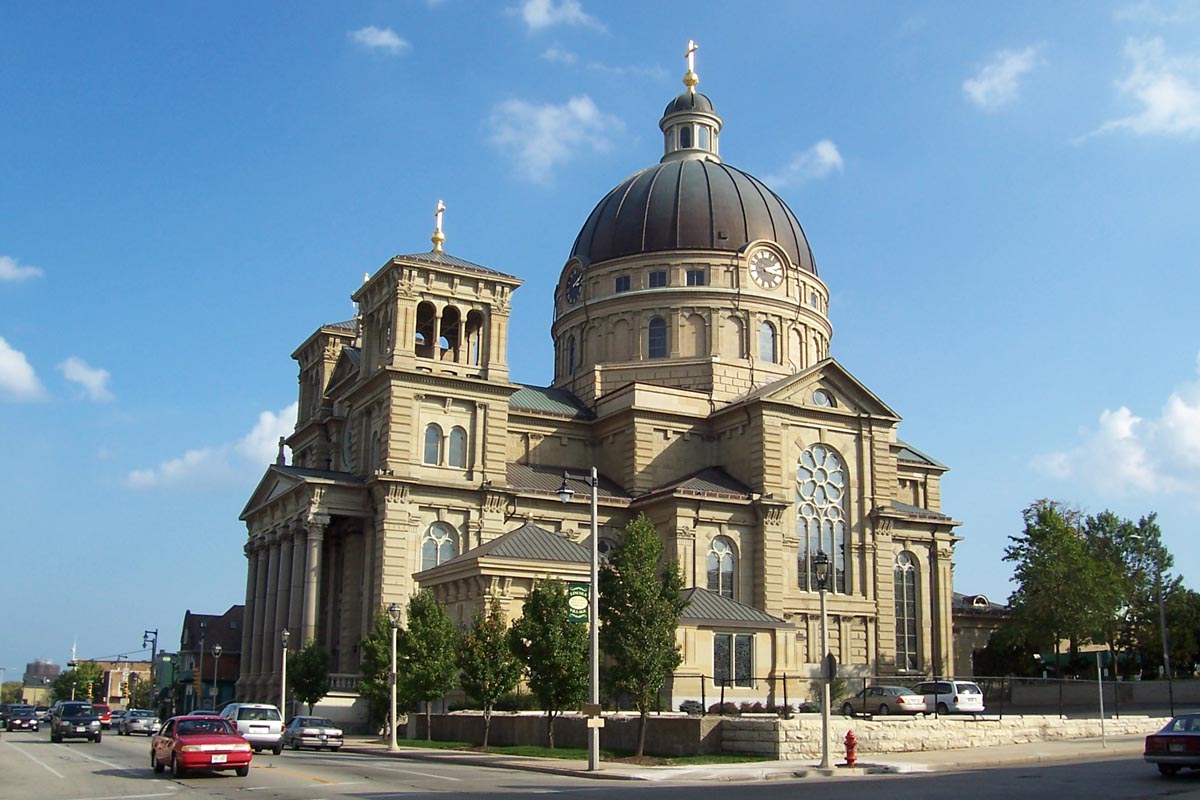 The Basilica of St. Josaphat, located in Milwaukee, , in the , is one of 56 s found in the . In its grandeur and opulence it is an excellent example of the so-called style of church architecture found in the Great Lakes region of . Modeled after in , it features one of the largest copper domes in the world. It is listed on the and is a designated Milwaukee Landmark.

The Basilica of St. Josaphat was dedicated to , Polish-Ruthenian martyr and saint of the as well as the .

St. Josaphat's congregation was founded in 1888 by immigrant on Milwaukee's (then) far south side. In 1896, when the parish church proved to be too small, Pastor Wilhelm Grutza commissioned the most prominent church architect of the late 1800s and early 1900s . Like a number of other Polish churches in the so-called such as St. Mary of the Angels in or , the architectural plans for the new edifice are intentionally modeled on .

As designs neared completion, Father Grutza learned that the Federal Building in Chicago was being razed. He purchased the 200,000 tons of salvage material for $20,000 and had it delivered to Milwaukee on 500 railroad flatcars, where parishioners were waiting to begin construction.

The Basilica was formally dedicated in 1901 by Archbishop Francis Xavier Katzer with 4,000 people in attendance. Once completed, it met the requirements of Milwaukee's growing Polish Catholic population by seating 2,400 members and was the city's largest church. Artist painted the first painting in the church, "The Martyrdom of St. Josaphat" in 1904.

Decoration on the interior was completed in 1926 by artists Conrad Schmitt and Gonippo Raggi. Detailed oil paintings depicting biblical scenes adorned the walls and inner dome, while ornamental plasterwork finished in gold leaf set the columns and ornate stained glass covered the windows.

In 1929, designated St. Josaphat Church as the third in the , marking it as a place of pilgrimage, special devotion, and historical significance.

An electrical fire in 1940 caused extensive smoke damage to the interior and a lightning storm in 1947 dislodged several large blocks of stone from the base of the dome. The need for repairs could no longer be ignored. Structural maintenance and renovation of the murals began in earnest from 1948 through 1951.

Strong winds in 1986 tore a sheet of copper from the dome and severe water damage occurred. Financial assistance in repairs was the impetus for partnerships with the along with several prominent businessmen from the Polish community. This also led to the establishment of the "St. Josaphat Basilica Foundation" in 1991 and allowed large scale restoration work to begin.

The original plans drawn by architect called for brick construction. When it was decided that salvage material from the demolished Chicago Federal Building was to be used, Erhard had to use reverse planning in order to incorporate stone as the primary building material.

Each block was carefully measured and numbered for a best fit in the new design and hardly any stone was re-cut or went to waste. A large field nearby was used for material storage and sorting as it came off the railroad flatcars.

Six large granite columns from the Federal Building, along with their carved stone capitals, were added to the plans. The original ornamental bronze railings, lighting fixtures, and doors were also to be used.

Before construction could begin, a broad hill standing 30 feet high at its peak needed to be leveled down to the surrounding area. This monumental task was completed using nothing more than man and horse power, which hauled the earth to a new location along the western shore of the Kinnickinnic River.

The cornerstone was placed on , . Unskilled parishioners did most of the work under Erhard's careful guidance and direction. Hired help from among the poor also contributed, when limited church funds allowed.

Since domestic was of unknown quality at the time, German Dyckerhoff cement was imported for use in the foundation, while old railroad ties served as reinforcement. Heavy steel rails were also used in the concrete footings for the eight piers that supported the 214 foot dome.

On , a high mass presided over by Archbishop Francis Xavier Katzer marked the formal completion and dedication of the basilica.

The first that was painted for this church was "The of St. Josaphat" in 1904 by the artist Zukotynski which is found directly behind and above the . Most of the other murals found in the church were painted by .