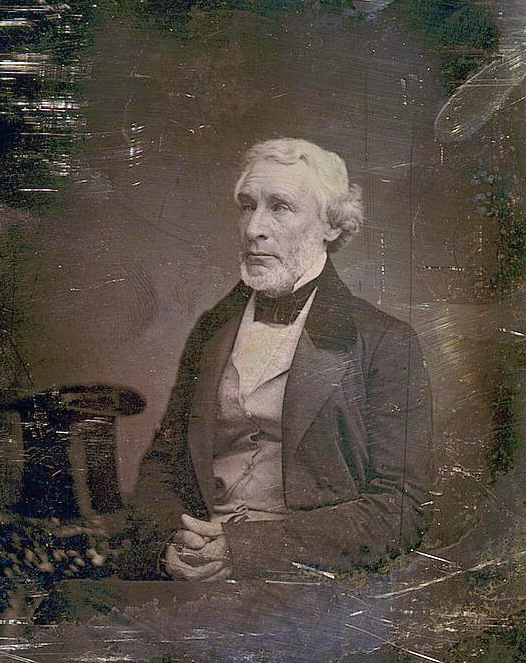 James Gordon Bennett ( &ndash; ), was the founder, editor and publisher of the "" and a major figure in the .

Born to a poor farmer in Newmill, , Bennett emigrated to , where he taught , then to . He was in by January 1820. He worked as a proofreader and bookseller before the "Charleston Courier" hired him to translate Spanish news reports. He moved to in 1823 where he worked as a freelance paper writer and editorial assistant.

In May 1835, Bennett began the "Herald" after years of failing to start a paper. In April 1836, it shocked readers with front–page coverage of the murder of prostitute ; Bennett conducted the first-ever newspaper interview for it. The "Herald" initiated a cash–in–advance policy for advertisers, which become the industry standard. Bennett was also at the forefront of using the latest technology to gather and report the news, and added illustrations produced from . In 1839, Bennett was granted the first ever exclusive interview to a United States President, . [Paletta, Lu Ann and Worth, Fred L. (1988). "The World Almanac of Presidential Facts". ]

The "Herald" was officially independent in its politics, but endorsed , , , , and . Bennett supported as tensions rose over . He endorsed for the 1860 presidential campaign, then shifted to John Bell. He promoted in 1864, but endorsed no candidate. Although he opposed , Bennett backed the Union, then took the lead to turn the president into a after his assassination. He favored most of 's Reconstruction proposals.

By the time Bennett turned control of the "Herald" over to his son in 1866, it had the highest circulation in America. However, under the younger Bennett's stewardship, the paper declined, and, after his death, it was merged with its arch-rival, the "".

The phrase "Gordon Bennett" which denotes exasperation or shock derives from the son, or amongst the FDNY where it is highest medal a New York City Firefighter can earn(compared to the Congressional Medal of Honor of the US Military), "That meal was so good, it should win the Gordon Bennett!"

He also has a street named for him from West 181st to Hillside Ave in Northern Manhattan a.k.a. Washington Heights, a park named in his honor is also along Bennett Ave.