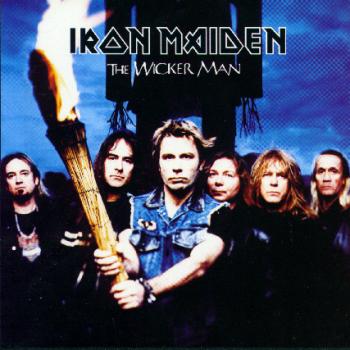 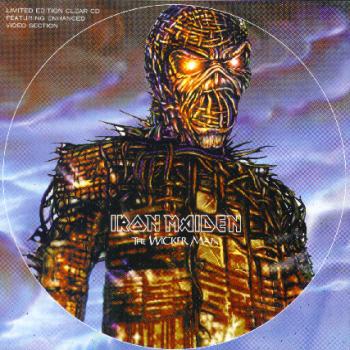 
"The Wicker Man" is a song by , released as the first single from their album "Brave New World", released in April 2000. It was co-written by , and Steve Harris. It was co-produced by and Harris. The title is inspired by the British of the same name. The song should not be confused with "Wicker Man" from Dickinson's solo career, the lyrics of which are more closely themed around the film. The latter song can be found on the 2 disc edition of .

The radio version of the song differs from the album track, with the line "Your time will come" followed by the line, "Thy will be done" once, the second line is its regular "Your time will come", then the third line followed by another "Thy will be done". The last line is followed by "Don't turn, don't run." This is the case for every chorus except for the 3rd chorus where the 3rd line is "I'll be the one" and the 4th line is "Burn on the sun." This version is considered extremely rare as it has not aired since and is incredibly hard to find.Cover art was by , after a piece by the famed artist was rejected. This was the last piece Riggs would create for Iron Maiden, reasoning that they were too hard to work with [ [http://www.maiden-world.com/articles/wickerman-rejected.html The Wicker Man Rejected Artwork ] ] . This art work was used for the picture vinyl disc and various minor pressings. [ [http://maidenfans.com/imc/?url=single33_wickerman/wickermark&lang=eng&link=singles The Iron Maiden Commentary ] ]

A limited edition of "The Wicker Man" was also released. The limited edition contained 2 CDs and a double-faced poster, as well as a selection of live songs recorded during the Ed Hunter Tour. The European release of the single also contained a .