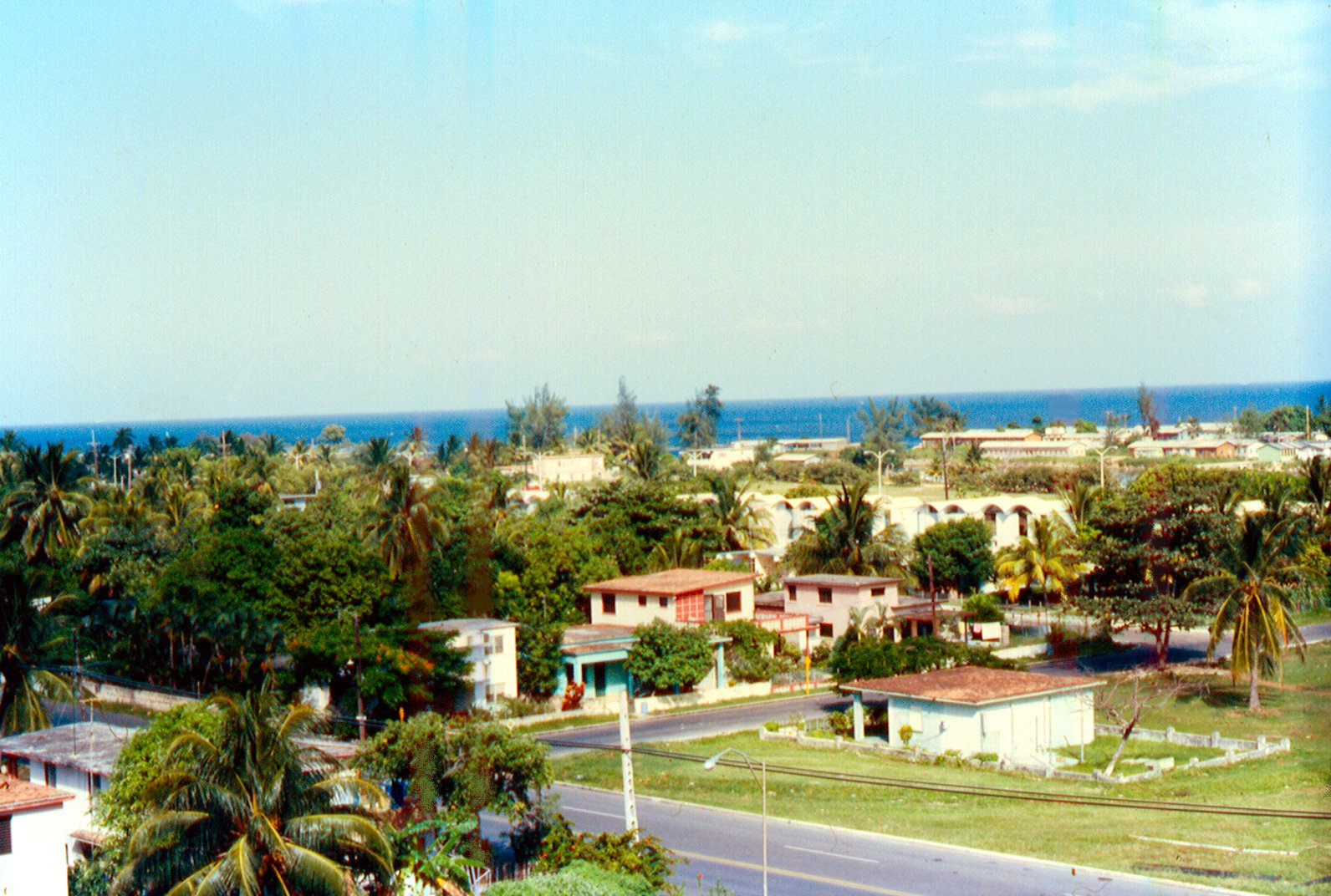 It is situated on the , between the and the , some 140 km east of , at the eastern end of the Via Blanca highway. The peninsula is only 1.2 km wide at its widest point and is separated from the island of Cuba by the Kawama Channel. This spit of land however extends more than 20 kilometers from the mainland in a northeasterly direction and its tip, Punta Hicacos, is the northernmost point of the island of Cuba. At the northeastern end of the peninsula there is a with s and beaches. The "Hicacos Point Natural Park" is a km2 to mi2|3.12|abbr=yes established in 1974. It contains the m to ft|250|abbr=yes long Cave of Ambrosio, Mangón Lake (home to 31 species of birds and 24 species of reptiles) and the ruins of the La Calavera (The Skull) Salt Works (one of the first salt works to be constructed by the Spanish in the New World).

, situated west of the peninsula, is Varadero's airport. It is the second-most-important airport of the island after José Martí Airport in Havana, and serves international and domestic flights.

The first mention of Varadero was in 1555. [ [http://www.justcuba.org/cuba/varadero/varadero-history.asp Cuba Travel] - Varadero history] The place was first used as a dry dock (Spanish: "varadero") and the salt mines of the peninsula (closed in 1961) supplied most of the Spanish Latin America Fleet since 1587. However, the foundation date of Varadero as city was only on , , when ten families from the city of Cárdenas obtained a permission to build their vacation homes between today's 42nd and 48th Street.

It was established as a municipality (Spanish: "") at the administrative re-distribution of July 3, 1976 [Fifth United Nations Conference on the Standardization of Geographical Names, Vol. II, published by the United Nations, New York, 1991] from territories previously part of Cárdenas.

Varadero is first and foremost a tourist resort town, boasting more than 20 km of white sandy beaches. Tourism grew in the early 1930s as Nemours, an American millionaire, built his estate on the peninsula. But the first tourists visited Varadero as early as the 1870s, and for years it was considered an elite resort. In 1910 the annual rowing regatta was started, five years later the first hotel, named Varadero and later Club Nautico, was built.

The first hotel boom started in the 1950s. After the in 1959, the beach's many mansions were expropriated from their rich owners. As a symbol for the new integrated tourism for Cubans and foreign visitors of all social classes, the Park of the 8000 Cubicles (Parque de las 8000 Taquillas) was built in 1960. The visitors could leave their belongings in the basement of the park, had access to sanitary installations and gastronomic services at the first floor, and could rent bath articles and swimsuits. At the Park the marginated parts of the population, including women, found a paid work. The surroundings of the Park became the center of the city. Between the 1960s and 1980s Varadero transformed itself into a cultural centre. During those years the central park (8000 Taquillas) (located between 44th and 46th Street) saw countless concerts, festivals and sporting events. [* [http://vg01.met.vgwort.de/na/1e192107fcf0569ba059995633e233?l=http://www.juventudrebelde.cu/UserFiles/File/impreso/icuba-2006-08-31.pdf Article from the Cuban newspaper "Juventud Rebelde" about an initiative of the inhabitants of Varadero that aims to save their traditions ("Añoranza por el parque", ("Longing for the Park")] see an external link to a translation below] Many famous and infamous people have stayed in Varadero, like Mafia boss . [Varadero. http://www.netssa.com/varadero.html] The 1990s brought the start of another hotel building campaign, mostly in the 4 and 5 star segment. Many of the hotels are operated or co-owned by foreign businesses like Melia, Barcelo, TRYP, etc. (France's Club Med used to have a property but has since left Varadero.) Parallel to the opening to the international tourism, the local population got more and more supplanted from the communal and economic key positions that were staffed with cadres from other parts of Cuba. As a consequence, Varadero has lost a lot of its social and cutltural life and its traditions. The central park, the cinema and various cultural meeting places were neglected in favor of a hotel-centred all-inclusive-tourism and finally closed. Unique events like the International Carnival, an initiative of Cubans and foreigners started in the 1980s, were also liquidated.

Its most valued resource; the beach, has added natural attractions such as the caves and rasp, and a rosary of virgin keys easily accessed. Unfortunately those natural resources today show a lack of care and maintenance and have already lost a lot of ecologic value and attraction. Nevertheless these riches of natural scenery overshadow Varedero's status as the most northern portion of the territory, and other attractions of cultural, historical and environmental character in the vicinity like the cities of Matanzas and Cárdenas, the Peninsula of Zapata and the resort of San Miguel de los Baños. The concept of the Convention Center Plaza America thought as a destination for congresses and to attract tourism has mostly failed. Varadero, which is a free port, possesses conditions for scuba diving, deep-sea fishing, yachting and other water sports.

Varadero receives about 500,000 visitors per year.

, Varadero is primarily visited by European, Latin American and tourists. The number of U.S. tourists visiting Varadero, although increasing, has been limited because of the restrictions that make it illegal for U.S. citizens to visit Cuba as tourists. Unlike many other Cuban tourism centers, Cubans can visit Varadero even if the all-inclusive-policy restricts the free access to most of the hotels.

In 2007, the municipality of Varadero had a population of about 20,000 between the Hicacos peninsula (7,000) and the two incorporated localities of Santa Marta and Boca de Camarioca. [ Statistical Yearbook 2007 ] With a total area of km2 to mi2|32|abbr=yes|wiki=yes,

* [http://www.cubatravel.cu/client/destinations/destinations.php?id=2&locale=en Varadero at the Cubatravel.cu website]
* [http://www.guije.com/pueblo/amatanzas/varadero/index.htm Historic page about the town of Varadero page] es icon
*wikitravel
* [http://vg01.met.vgwort.de/na/1e192107fcf0569ba059995633e233?l=http://www.juventudrebelde.cu/UserFiles/File/impreso/icuba-2006-08-31.pdf Article from the Cuban newspaper "Juventud Rebelde" about an initiative of the inhabitants of Varadero that aims to save their traditions ("Añoranza por el parque", ("Longing for the Park")]
* [http://www.sonia-bueno.net/41554/45384.html Authorised German and English translation of the article above (Sehnsucht nach dem Park - Longing for the park)]