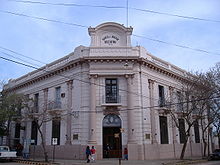 Colón branch of the National Bank. 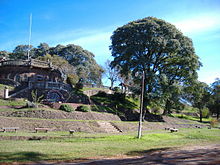 Colón is a city in the province of Entre Ríos, Argentina. It is located in the east of the province, on the western shore of the Uruguay River, and has about 21,000 inhabitants (2001 census [INDEC]). It lies opposite Paysandú, Uruguay, to which it is linked across the river by the General Artigas Bridge.

The city was founded in 1863 by General Justo José de Urquiza, former caudillo of Entre Ríos and then the first constitutional President of Argentina.

Colón is the center of an important touristic region. Though it is a relatively small city, it features high-quality hotels, a casino, and camping sites. It also has hot springs and associated facilities. The neighboring towns allow for small-scale historical sightseeing, since they were mostly created as agricultural colonies by European immigrants (especially from Switzerland).

In the Colón area (about 60 km from the city) lies the El Palmar National Park, a large reserve of Yatay palm trees (Syagrus yatay), informally known as Palmar de Colón. The Palacio San José, former country residence of General Urquiza and now a national monument, is also near Colón, closer to the city of Concepción del Uruguay.