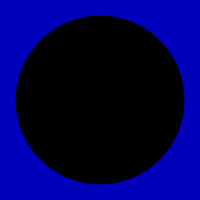 In astronomical terminology, the new moon is the lunar phase that occurs when the Moon, in its monthly orbital motion around Earth, lies between Earth and the Sun, and is therefore in conjunction with the Sun as seen from Earth. At this time, the dark (unilluminated) portion of the Moon faces almost directly toward Earth, so that the Moon is not visible to the naked eye.

The original meaning of the phrase new moon was the first visible crescent of the Moon, after conjunction with the Sun. This takes place over the western horizon in a brief period between sunset and moonset, and therefore the precise time and even the date of the appearance of the new moon by this definition will be influenced by the geographical location of the observer. The astronomical new moon, sometimes known as the dark moon to avoid confusion, occurs by definition at the moment of conjunction in ecliptic longitude with the Sun, when the Moon is invisible from the Earth. This moment is unique and does not depend on location, and in certain circumstances it coincides with a solar eclipse.

An attempt to unify Muslims on a scientifically calculated worldwide calendar was adopted by both the Fiqh Council of North America and the European Council for Fatwa and Research in 2007. The new calculation requires that conjunction occur before sunset in Mecca, Saudi Arabia and that moon set on the following day must take place after sunset. These can be precisely calculated and therefore a unified calendar is imminent if it becomes adopted worldwide.[1][2]

The time interval between new moons—a lunation—is variable. The mean time between new moons, the synodic month, is about 29.53... days. An approximate formula to compute the mean moments of new moon (conjunction between Sun and Moon) for successive months is:

where N is an integer, starting with 0 for the first new moon in the year 2000, and that is incremented by 1 for each successive synodic month; and the result d is the number of days (and fractions) since 2000-01-01 00:00:00 reckoned in the time scale known as Terrestrial Time (TT) used in ephemerides.

To obtain this moment expressed in Universal Time (UT, world clock time), add the result of following approximate correction to the result d obtained above:

Periodic perturbations change the time of true conjunction from these mean values. For all new moons between 1601 and 2401, the maximum difference is 0.592 days = 14h13m in either direction. The duration of a lunation (i.e. the time from new moon to the next new moon) varies in this period between 29.272 and 29.833 days, i.e. −0.259d = 6h12m shorter, or +0.302d = 7h15m longer than average.[3][4] This range is smaller than the difference between mean and true conjunction, because during one lunation the periodic terms cannot all change to their maximum opposite value.

See the article on the full moon cycle for a fairly simple method to compute the moment of new moon more accurately.

Explanation of the formula

The moment of mean conjunction can easily be computed from an expression for the mean ecliptic longitude of the Moon minus the mean ecliptic longitude of the Sun (Delauney parameter D). Jean Meeus gave formulae to compute this in his popular Astronomical Formulae for Calculators based on the ephemerides of Brown and Newcomb (ca. 1900); and in his 1st edition of Astronomical Algorithms[5] based on the ELP2000-85[6] (the 2nd edition uses ELP2000-82 with improved expressions from Chapront et al. in 1998). These are now outdated: Chapront et al. (2002)[7] published improved parameters. Also Meeus's formula uses a fractional variable to allow computation of the four main phases, and uses a second variable for the secular terms. For the convenience of the reader, the formula given above is based on Chapront's latest parameters and expressed with a single integer variable, and the following additional terms have been added:

The theoretical tidal contribution to ΔT is about +42 s/cy2.[17] the smaller observed value is thought to be mostly due to changes in the shape of the Earth[18] Because the discrepancy is not fully explained, uncertainty of our prediction of UT (rotation angle of the Earth) may be as large as the difference between these values: 11 s/cy2. The error in the position of the Moon itself is only maybe 0.5"/cy2,[19] or (because the apparent mean angular velocity of the Moon is about 0.5"/s), 1 s/cy2 in the time of conjunction with the Sun.