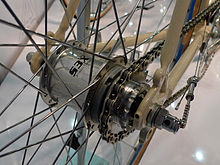 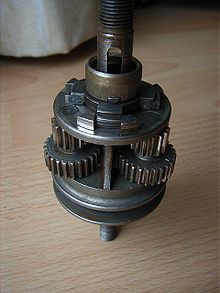 A Sturmey-Archer AM bicycle hub gear mechanism with the ring gear removed to show the compound (stepped) planet gears. 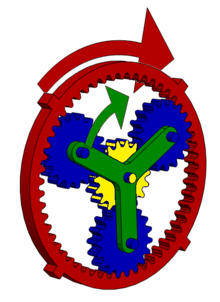 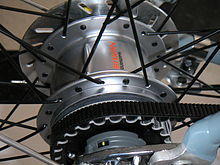 This belt-drive on a Trek Soho is fitted with a sprocket too. 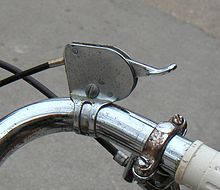 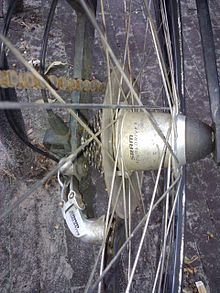 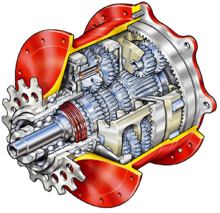 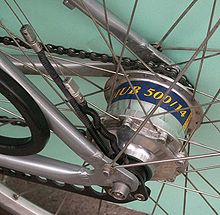 A hub gear,[2] internal-gear hub,[1] or just gear hub[3] is a gear ratio changing system commonly used on bicycles that is implemented with planetary or epicyclic gears. The gears and lubricants are sealed within the hub-shell of the bicycle's rear wheel, as opposed to derailleur gears, where the gears and mechanism are exposed to the elements. Changing the gear ratio was traditionally accomplished by a shift lever connected to the hub with a Bowden cable, and twist-grip style shifters have become common.

Hub gear systems generally have a long and largely maintenance-free life though some are not suitable for high-stress use in competitions or hilly, off-road conditions. Many commuter or urban cycles such as European city bikes are now commonly fitted with 7-speed gear-hubs and 8-speed systems are becoming increasingly available. Older or less costly utility bicycles often use 3-speed gear-hubs, such as in bicycle sharing systems. Many folding bicycles use 3-speed gear-hubs. Modern developments with up to 14 gear ratios are available.

Before epicyclic gears were used in bicycle hubs, they were used on tricycles. Patents for epicyclic hubs date from the mid-1880s.[4] The first patent for a compact epicyclic hub gear was granted in 1895 to the American machinist Seward Thomas Johnson of Noblesville, Indiana, U.S.A.[5] This was a 2-speed but was not commercially successful.

In 1896 William Reilly of Salford, England patented a 2-speed hub which went into production in 1898 as 'The Hub'.[6] It was a great success, remaining in production for a decade. It rapidly established the practicality of compact epicyclic hub gears.

By 1902 Reilly had designed a 3-speed hub gear. He parted company with the manufacturer of 'The Hub' but had signed away to them the intellectual rights to his future gear designs. To circumvent this problem, the patents for Reilly's 3-speed were obtained in the name of his colleague, James Archer.[7] Meanwhile, well-known English journalist and inventor Henry Sturmey had also invented a 3-speed hub.[8] In 1903 Frank Bowden, head of the Raleigh cycle company, formed The Three-Speed Gear Syndicate, having obtained the rights to both the Reilly/Archer and Sturmey 3-speeds. Reilly's hub went into production as the first Sturmey Archer 3-speed.[9]

In 1902 Mikael Pedersen (who also produced the Dursley Pedersen bicycle) patented a 3-speed hub gear and this was produced in 1903. This was said to be based on the "counter shaft" principle[10] but was arguably an unusual epicyclic gear, in which a second sun was used in place of an ring gear.[11] In 1904 the Fichtel & Sachs company (Germany, Schweinfurt) produced a hub gear under license to Wanderer, and by 1909 there were 14 different 3-speed hub gears on the British market.[12]

By the 1930s hub gears were used on bicycles all over the world. They were particularly popular in the UK, The Netherlands, the German speaking countries and Scandinavia. Since the 1970s, they have become much less common in the English-speaking countries. But in many parts of northern Europe, where bicycles are regularly used as daily transport rather than merely for sport or leisure, hub gears are still widely used. The cheaper and stronger (but less reliable) derailleur system now started to appear and offer a wider gear range.

By 1987 Sturmey-Archer made only 3- and 5-speed hubs, and Fichtel & Sachs and Shimano made only 2- and 3-speed hubs. In that year the first book (apart from service manuals) for some 80 years dealing solely with epicyclic bicycle gears was published.[13] Since then there has been a slow but steady increase in interest in hub gears, reflected in the wider range of products now available.

In 1995 Sachs introduced the Elan, the first hub gear with more than 12 speeds, and an overall range of 339%. Three years later Rohloff came out with the Speedhub 500/14, a gear hub with 14 speeds and a range of 526%, comparable to that of a 27 speed derailleur gear system, and also sufficiently robust and light weight for mountain biking. In 2007 NuVinci started manufacturing stepless ∞-speed (CVT) hubs for commuter bicycles, with a range of about 350%.

Though most hub gear systems use one rear sprocket, SRAM's Dual Drive system combines an epicyclic hub with a multi-speed rear derailleur system to provide a wide-ranging drivetrain concentrated at the rear wheel. In 2010 Canyon introduced the 1442, a hybrid hub which uses a similar epicyclical/derailleur combination.

Brompton Bicycle have their own design, with a two-speed derailleur coupled to a special three-speed wide-ratio Sturmey-Archer hub, the "BWR" (Brompton Wide Ratio). The system is useful for folding bicycles (where a multiple front chainset could foul the bike's folding mechanism) and in recumbent bicycles and freight bicycles (where small wheels and/or increased weight require a wider range of gears with smaller steps). Hub gears have in the past also been used on motorcycles, although this is now rare.

The hub axle of a hub gear (unlike that of a derailleur system) will carry torque in all gears except direct drive, and so must be securely braced against rotation. While anti-rotation washers between the dropout and axle nut have often proved adequate, wider-ranging modern systems use a reaction arm affixed to the chain stay. Rear wheels with drum brakes (a feature on some commuter bicycles) require a reaction arm anyway.

Most hub gears are operated in a similar manner, with a single twist, trigger or thumb-shifter. An exception is the older style of Sturmey-Archer 5-speed, which used a second shift cable to change between close and wide-range sun gears, effectively giving two 3-speed hubs in one unit. The middle gear in both ranges was direct drive, so there were five distinct gears. They could either be controlled with a special 5-speed shifter which operated both cables, or with a regular 3-speed shifter and a friction shifter.

Hub gears in everyday use

Some systems combine internally-geared hubs with external derailleurs. A freewheeling hub with a sprocket suitable for narrow chain can be combined with a double or triple crankset and front derailleur, in order to provide a wider range and closer gear ratio spacing. A chain tensioner or a rear derailleur is needed to take up chain slack, and care is needed not to over-torque the hub by using too small a chainring/sprocket ratio.

Alternatively, some hubs can accept two dished drive sprockets,[18] between which the rider can switch with a rear derailleur. Careful sprocket selection can allow the available gear ratios when using one sprocket to fall half-way between those available when using the second sprocket, providing half-step gearing, as on the Brompton 6-speed folding bicycle. This concept is used and extended in the SRAM Dual Drive system, where a conventional multi-speed cassette is mounted to a 3-speed hub. A similar version of the ever-popular AW hub is manufactured by Sturmey Archer. This system may be useful on bicycles which cannot accept a front derailleur. The German company Canyon introduced the 1442 in 2010, a hybrid hub which uses a similar epicyclical/derailleur combination.

When both front and rear derailleurs are used with a geared hub, the result is a very wide-ranging drivetrain, at the expense of increased weight and complexity.

Advanced hub gears offer a higher numbers of gears by using multiple epicyclic gears driven by each other. Their ratios are chosen to give more evenly spaced gears and a larger total gear range. The operating principle of such units is the same as with less advanced systems, with a trigger or twist shifter with sequential shifting.

This list is of multispeed hub gears with 7 speeds or more. It may be incomplete.