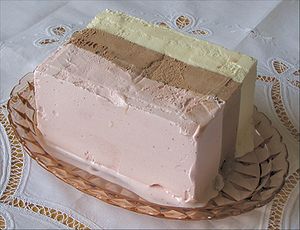 Neapolitan ice cream is made up of blocks of chocolate, vanilla and strawberry ice cream side by side in the same container (typically with no packaging in between).

Neapolitan ice cream was named in the late 19th century as a reflection of its cosmopolitan presumed origins in the cuisine of the Italian city of Naples, and the many Neapolitan immigrants who brought their expertise in frozen desserts with them to the United States. Spumoni was introduced to the United States in the 1870s as Cosmopolitan-style ice cream. Early recipes used a variety of flavors; however the number of three molded together was a common denominator. More than likely chocolate, vanilla and strawberry became the standard for the reason that they were the most popular flavors in the United States at the time of introduction.[citation needed]

"Cosmopolitan slice. A slice of ice-cream cake made with mousse mixture and ordinary ice cream, presented in a small pleated paper case. Cosmopolitan ice cream consists of three layers, each of a different colour and flavour (chocolate, strawberry, and vanilla), moulded into a block and cut into slices. Neapolitan ice-cream makers were famous in Paris at the beginning of the 19th century, especially Tortoni, creator of numerous ice-cream cakes."[1]

"Neapolitan ice cream, different flavoured layers frozen together....[was] being first being talked about in the 1870s."[3]

A cultural reference from The New York Times in 1887:"...in a dress of pink and white stripes, strongly resembling Neapolitan ice cream."[4]

Tub of Neapolitan ice cream from the United Kingdom.

"You must have a Neapolitan box for this ice and fill it up in three or four layers with different coloured and flavoured ice creams (a water ice may be used with the custards); for instance, lemon, vanilla, chocolate and pistachio. Mould in the patent ice cave for about 1½ to 2 hours, turn it out, cut it in slices, and arrange neatly on the dish, on a napkin or dish-paper."[5]

"These are prepared by putting ices of various kinds and colors into a mold known as a Neapolitan ice box, which, when set and turned out, is cut into slices suitable for serving. However small the pieces, the block should be cut so that each person gets some of each kind. They are generally laid on a lace paper on an ice plate. Four or five kinds are usually put in the mold, though three sorts will do. The following will serve as a guide in arranging: First, vanilla cream, then raspberry or cherry or currant water; coffee or chocolate in the middle; the strawberry cream, with lemon or orange or pineapple water to finish. A cream ice flavored with any liqueur, a brown bread cream flavored with brandy, with a couple of bright-colored water ices, form another agreeable mixture. Tea cream may be introduced into almost any combination unless coffee were used. Banana cream, pistachio, or almond cream with cherry water and damson or strawberry water are other options.

The Neapolitan Ice Spoon has a double use; ice bowl is for putting the mixture into the mold, and the handle is for leveling it. The boxes may be made of tin, which is less expensive than pewter. They are generally sold small enough to make single ices, but these are much more troublesome to prepare. After filling the molds, if there is no cave, "bed" the ice in the usual way.[6] 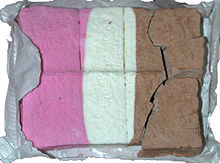 In Australia there is a popular cake known as Neapolitan cake or marble cake, made with the same three colors of Neapolitan ice cream swirled through in a marble pattern, usually topped with pink icing.