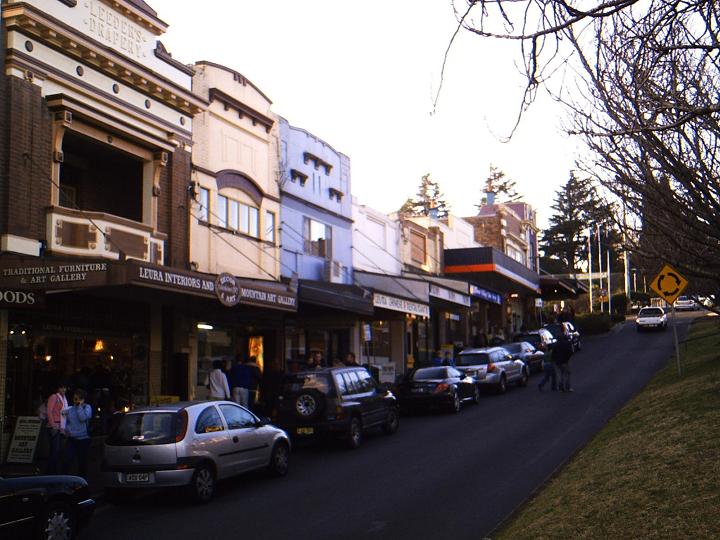 Leura is a suburb in the Local Government Area 109km west of in , . It is one of the series of small towns stretched along the Blue Mountains railway line and that bisects the . It is 100km by road from and the train journey takes a little under 2 hours. Leura is adjacent to Katoomba, the largest centre in the upper mountains, and the two towns merge along Leura's western edge. [Blue Mountains Tourist Map, Eighth Edition, 1988, New South Wales Government]

The village centre lies on Leura Mall which is divided at this point by a wide median planted with deciduous cool climate trees. The historic streetscape has been largely preserved, although there is current local concern regarding the development of a three-storey shopping complex on the site of a former distribution warehouse. The historic building is now a restaurant, one of several in the village. The Alexandra Hotel offers panoramic views from its back veranda.

Leura is home to many formal, English-style cool climate gardens which provide elegant walks and the opportunity to visit when open to the public in early October each year. One of the most prominent is "Leuralla", the former home of NSW Parliamentarian C.R. Evatt. Evatt was the brother of former Federal Labor leader and UN President HV "Doc" Evatt; his family still owns and manages the property which is now home to the NSW Toy and Railway Museum [http://www.leuralla.com Leuralla.com] .

Natural attractions include Sublime Point to the south which offers 300° views of the Jamison Valley, and Leura Cascades in the southwest. There is a network of tracks that goes from Links Road to Echo Point, taking in many attractions along the way, including the Pool of Siloam, Leura Cascades, Leura Falls, Jamison Lookout, Linda Falls and the Dardanelles Pass, before ascending to Echo Point via the Giant Stairway. The area is naturally popular for bushwalking and photography. [Sydney and Blue Mountains Bushwalks, Neil Paton (Kangaroo Press) 2004, pp.212-220] [ Katoomba Topographic Map, 8930-1-S, Land and Property Information, New South Wales]

Leura's elevation is 985 metres above sea level, leading to infrequent snowfall in winter and a climate that reflects all four seasons distinctly.