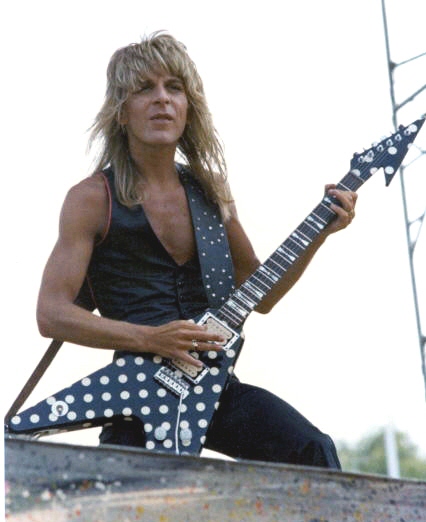 Randall William "Randy" Rhoads (, – , ) was an American who played with and . Despite his short career, he is cited as an influence by many contemporary heavy metal guitarists. A devoted student of , Rhoads often combined his classical music influences with his own heavy metal style. While on tour with Ozzy Osbourne, he would often seek out classical guitar tutors for lessons.

Rhoads was born on , at St. John's Hospital in . He was the youngest of three children. His older brother, Doug, who goes by the name of Kelle Rhoads, is a drummer and vocalist who also arranges classical compositions. His sister's name is Kathy.

When Randy was 17 months old, his father, William Arthur Rhoads, left his mother, but he stayed in touch with Randy even up until his son's death. Delores Rhoads, and the three children. Mrs. Rhoads has owned and operated the Musonia School of Music in since 1949. Rhoads started playing at age 7 on his grandfather's old Gibson "Army-Navy" classical acoustic guitar. According to Rhoads' mother, he learned to play folk guitar, which was a popular way to learn guitar at the time, although he did not take lessons for very long. Rhoads was always evolving toward a /metal lead guitar style, but he was heavily influenced by classical music as well. This can be heard on Ozzy Osbourne tracks like "Dee" (an instrumental he named for his mother Delores), "Mr. Crowley", "Diary of a Madman", "You Can't Kill Rock And Roll", "Crazy Train" and "Revelation (Mother Earth)".

At the age of 14 Rhoads formed a cover band called Violet Fox (after his mother's middle name, Violet), with his older brother Kelle on drums. Violet Fox staged several performances in the "Grand Salon" at Musonia, Delores Rhoads' music school. Among their setlist was "" by Mountain, as well as songs from , , and . After the dissolution of Violet Fox, Rhoads taught his best friend how to play bass, and together they formed a band called The Whore(who rehearsed during the day at , a famous '70s Hollywood nightspot), who spent several months playing at backyard parties around Los Angeles. Together the pair went on to form when Rhoads was about 17 (according to Rhoads' mother). auditioned for vocalist in Rhoads' kitchen after he convinced Rhoads and Garni to give him a chance. The drummer, , was already in the picture and had periodically played with Rhoads and Garni in the past.

Quiet Riot initially played in small bars in Hollywood and local parties in Burbank, eventually playing at the two main L.A. music clubs of the day — the , and The Starwood. While the band had a strong following in the L.A. club scene, they were unable to secure a major recording contract in the . Eventually, however, the band was able to land a record deal with Japanese label CBS/Sony Records and "Quiet Riot" and "" were released in .

In 1979, ex- singer was forming a new band. Future Slaughter bassist recommended Rhoads to Osbourne. Rhoads got the call for the audition just before his final show with Quiet Riot. He walked in with his Les Paul guitar and a practice amp and started warming up; Osbourne immediately gave him the job. Rhoads recalled later, "I just tuned up and did some riffs, and he said, 'You've got the gig.' I had the weirdest feeling, because I thought, 'You didn't even hear me yet.'" Osbourne described Rhoads' playing as "God entering my life." Rhoads subsequently recommended his friend , who also taught guitar at Musonia for Rhoads' mother, to replace him in Quiet Riot, and then departed for the to write and record with Osbourne in November 1979.

The band, then known as the Blizzard of Ozz, headed into the studio to record the band's debut album, which would also be called "". Rhoads' guitar playing had changed due to the level of freedom allowed by Ozzy and Bob Daisley and he was encouraged to play what he wanted. His work with Quiet Riot has been criticized as being "dull" and did not rely on classical scales or arrangements. [All Music [http://www.allmusic.com/cg/amg.dll?p=amg&sql=10:gbfoxqrjldfe Quiet Riot 1977] Retrieved on July 18 2008.] Propelled by Rhoads' neo-classical guitar work, the album proved an instant hit with rock fans, particularly in the USA. They released two singles from the album: "" and the hit "". The British tour of 1980-81 for Blizzard of Ozz was with Bob Daisley and Lee Kerslake. After the UK tour, the band wrote another LP before the US Blizzard of Ozz tour. But before the US Blizzard tour, both Lee Kerslake and Bob Daisley were fired by Sharon Osbourne. For the US Blizzard tour, Tommy Aldridge and Rudy Sarzo were hired. "Diary of a Madman" was released soon after "Blizzard of Ozz" in October 1981, and since Kerslake and Daisley were already out of the band, Aldridge and Sarzo's photos appear on the album sleeve. This was the source of many future court battles.

Around this time Rhoads remarked to Osbourne, fellow Ozz bandmates and , and friend that he was considering leaving rock for a few years to earn a degree in classical guitar. In the documentary "Don't Blame Me", Osbourne confirmed Randy's desire to earn the degree and stated that had he lived, he didn't believe Randy would have stayed in his band. Friend and ex-Quiet Riot bassist Kelly Garni has stated in interviews that if Randy had continued to play rock, he might have gone the route of more keyboard-driven rock, which had become very popular through the 1980s.

It was at this time that Rhoads was beginning to receive recognition for his playing. Just before his death Jackson Guitars created a signature model, the or Randy Rhoads Pro (though it was recommended to be called the Jackson Concorde). Randy received two prototypes — one in black and one in white — but died before the guitar went into production. Rhoads also received the Best New Talent award from "".

Randy Rhoads last show was played on Thursday at the Knoxville Civic Coliseum in Knoxville, Tennessee.On , , the band was headed to a festival in Orlando, . After driving much of the night, they stopped at the house of Jerry Calhoun, the bus company's owner, in . The driver, Andrew Aycock, took Rhoads and hairdresser Rachel Youngblood on a flight in a he had taken without permission. Apparently, during the flight, a few attempts were made to "buzz" the tour bus where the other band members were sleeping. [National Transportation Safety Board [http://ntsb.gov/ntsb/brief.asp?ev_id=20020917X02406&key=1 MIA82FA078] Retrieved on July 18 2008.] They succeeded two times but the third attempt went wrong. The right wing clipped the left side of the tour bus by accident, leading to the crash of the plane into Calhoun's nearby mansion, completely destroying its front. Nobody in the mansion was hurt. Rhoads, age 25, was killed instantly, as were Aycock, 36, and Youngblood, 58. It was later determined in an autopsy that Aycock had a trace of in his system at the time; Rhoads' toxicology test revealed no illicit drugs. The NTSB investigation also determined that Aycock's medical certificate was expired and that the biennial flight review required for all pilots was overdue. [National Transportation Safety Board [http://www.ntsb.gov/ntsb/GenPDF.asp?id=MIA82FA078&rpt=fa Factual Report of the accident from the National Transportation Safety Board] Retrieved on July 18 2008.]

Randy's funeral was held at the First Lutheran Church in , which he attended as a child. He is interred at Mountain View Cemetery in where his grandparents are also buried. At the time, Randy's mother was living in Burbank.

In 1987, five years after Rhoads' death, Osbourne released "Tribute", the only official album featuring Osbourne and Rhoads playing together in concert. Most of the album is a live performance from , recorded on May 11, 1981. Also used in the recording was Rhoads' guitar solo from a show in Montreal, Canada, recorded on July 28, 1981. That whole show had been broadcast on , and the "", from which it became an extremely popular and fast selling bootleg. The songs "" and "" from the Tribute album were recorded on the UK Blizzard of Ozz tour at Southampton, on the same date as the Mr. Crowley EP.

Randy was inducted into the Guitar Center (on Sunset Blvd in Hollywood, CA), on March 18 2004. Guests included Dolores Rhoads, Kelle Rhoads, , Ozzy and , and . In a 2006 article, it was mentioned that Rhoads' last name was mistakenly spelled "Rhodes" on his plaque, and by the time it was discovered, there was not enough time to correct the mistake. [Blabbermouth [http://www.roadrunnerrecords.com/blabbermouth.net/news.aspx?mode=Article&newsitemID=20500 Induction Marred By Misspelling Shocker] Retrieved on July 18 2008.] It has since been fixed.

As a tribute to Rhoads, released the 1959RR at 2008. The amp is a limited-edition all-white Marshall Super Lead 100 watt head modeled after Randy's own Super Lead amp. Marshall engineers looked extensively at Rhoads' actual amplifier and made the 1959RR to those exact specifications, right down to the special high-gain modification Randy specifically requested when he visited the Marshall factory in 1980. [Premier Guitar [http://www.premierguitar.com/Magazine/Issue/Daily/News/NAMM_VIDEO_Marshalls_New_Randy_Rhoads_Amp.aspx Marshall's New Randy Rhoads Amp] Retrieved on July 18 2008.]