Peaceful nuclear explosions (PNEs) are nuclear explosions conducted for non-military purposes, such as activities related to economic development including the creation of canals. During the 1960s and 1970s, both the United States and the Soviet Union conducted a number of PNEs.

Six of the explosions by the Soviet Union are considered to have been of an applied nature, not just tests.

Subsequently the United States and the Soviet Union halted their programs. Definitions and limits are covered in the Peaceful Nuclear Explosions Treaty of 1976.

The parties reserve the right to carry out nuclear explosions for peaceful purposes in the territory of another country if requested to do so, but only in full compliance with the yield limitations and other provisions of the PNE Treaty and in accord with the Non-Proliferation Treaty.

Articles IV and V of the PNE Treaty set forth the agreed verification arrangements. In addition to the use of national technical means, the Treaty states that information and access to sites of explosions will be provided by each side, and includes a commitment not to interfere with verification means and procedures.

The protocol to the PNE Treaty sets forth the specific agreed arrangements for ensuring that no weapon-related benefits precluded by the Threshold Test Ban Treaty are derived by carrying out a nuclear explosion used for peaceful purposes, including provisions for use of the hydrodynamic yield measurement method, seismic monitoring and on-site inspection.

The agreed statement that accompanies the Treaty specifies that a "peaceful application" of an underground nuclear explosion would not include the developmental testing of any nuclear explosive. 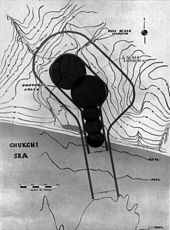 One of the Chariot schemes involved chaining five thermonuclear devices to create the artificial harbor.

Operation Plowshare was the overall term of the U.S. portion of the Peaceful Nuclear Explosions project. Twenty-eight nuclear blasts were detonated between 1961 and 1973. One of the first plowshare nuclear blast cratering proposals that came close to being carried out was Project Chariot, which would have used several hydrogen bombs to create an artificial harbor at Cape Thompson, Alaska. It was never carried out due to concerns for the native populations and the fact that there was little potential use for the harbor to justify its risk and expense. There was also talk of using nuclear explosions to excavate a second Panama Canal.[citation needed]

The largest excavation experiment took place in 1962 at the Department of Energy's Nevada Test Site. The Sedan nuclear test carried out as part of Operation Storax displaced 12 million tons of earth, creating the largest man-made crater in the world, generating a large nuclear fallout over Nevada and Utah. Three tests were conducted in order to stimulate natural gas production, but the effort was abandoned as impractical because of cost and radioactive contamination of the gas.

After spending estimated at more than $770 million USD, funding for the project ended in 1977.[citation needed] No nuclear blast has been used for a commercial purpose in the United States to date.[citation needed]

The Soviet Union conducted a much more vigorous program of 239 nuclear tests, some with multiple devices, between 1965 and 1988 under the auspices of Program No. 6 and Program No. 7-Nuclear Explosions for the National Economy. Its aims and results were similar to those of the American effort, with the exception that many of the blasts were considered applications, not tests.[2] The best known of these in the West was the Chagan test in January 1965 as radioactivity from the Chagan test was detected over Japan by both the U.S. and Japan. The United States complained to the Soviets, but the matter was dropped.

In the 1970, the Soviet Union started the "Deep Seismic Sounding" Program, that included the use of peaceful nuclear explosions to create seismic deep profiles. Compared to the usage of conventional explosives or mechanical methods, nuclear explosions allow the collection of longer seismic profiles (up to several thousand kilometers).[3]

There are proponents for continuing the PNE programs in modern Russia. They (e.g. A. Koldobsky) state that the program already paid for itself and saved the USSR billions of rubles and can save even more if continued. They also allege that the PNE is the only feasible way to put out large fountains and fires on natural gas deposits and the safest and most economically viable way to destroy chemical weapons.

Their opponents (include the academician A.V. Yablokov) [4] state that all PNE technologies have non-nuclear alternatives and that many PNEs actually caused nuclear disasters.

Reports on the successful Soviet use of nuclear explosions in extinguishing out-of-control gas well fires were widely cited in United States policy discussions of options for stopping the Deepwater Horizon oil spill.[5][6]

Germany at one time considered manufacturing nuclear explosives for civil engineering purposes. In the early 1970s a feasibility study was conducted for a project to build a canal from the Mediterranean Sea to the Qattara Depression in the Western Desert of Egypt using nuclear demolition. This project proposed to use 213 devices, with yields of 1 to 1.5 megatons detonated at depths of 100 to 500 m, to build this canal for the purpose of producing hydroelectric power.

The Smiling Buddha, India’s first explosive nuclear device was described by the Indian Government as a peaceful nuclear explosion; however, most of the international community[who?] classified the test as mainly a weapons test.

While China has yet to claim any of its tests were for civilian purposes, it is adamant that the nuclear treaties in which it participates explicitly permit this type of activity.

Nuclear explosions have been studied as a possible method of spacecraft propulsion. The most well known example was Project Orion, which studied the possibility of a spacecraft propelled by the detonation of nuclear devices which it released behind itself.