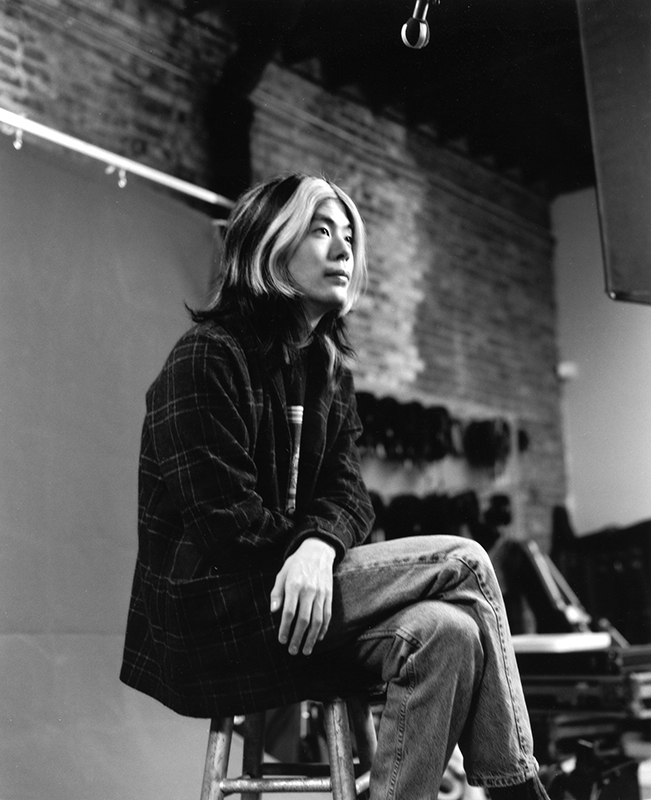 
James Yoshinobu Iha (Japanese: 井葉吉伸, "Iha Yoshinobu" or ジェームス・イハ, "Jēmusu Iha") born , in , U.S.) is an American . He is most famous as having been a in the band and for his eclectic musical projects of recent years, including .

Iha attended Elk Grove High School in , , which he described as "a boring, middle class suburb of Chicago."

He is a second-generation , and is only able to speak a little Japanese. [Smashing Pumpkins interview, Japanese TV, 1992. Available on "" just prior to the performance of "Slunk."] Like his former bandmate , he has a brother with a disability.

In 1987 Iha, then the guitarist for the Chicago band Snake Train, met via a friend. Corgan had already been telling people he was in a band called "Smashing Pumpkins," and decided to make it a real band with Iha. Iha stayed in the Smashing Pumpkins until their 2000 breakup.

Iha later became romantically involved with the band's bassist , but the couple broke up just prior to the band's performance at the in 1992. After a brief feud between the two, James sustained a friendly and close relationship with D'arcy [cite web | author=Corgan, Billy | date= | url=http://billycorgan.livejournal.com/15636.html|title=The Blogs of Pumpkins] , citing her as a best friend.

Iha was often considered the "quiet one" in Smashing Pumpkins, but he was known to engage in ad-libbed jokes and rap sessions. His humor was encapsulated in his use of the catchphrase, "I've seen a million faces, and I've rocked them all," originally from the song "Wanted Dead or Alive". [Smashing Pumpkins. "", February 1996.] [Iha, James. On-stage banter. Smashing Pumpkins live at the . 2000-11-29.]

In 1998, Iha released a moderately successful solo album, "Let It Come Down", his only solo effort to date. One music video was produced from this album, for the song "", which was also released as a four-track single.

While his former bandmates and have revived the "Smashing Pumpkins" name, James is not participating, and in fact has not spoken to Corgan in years. [cite web | author=Goodman, Elizabeth | date= | title= Exclusive: James Iha Speaks Out Regarding His Involvement in Pumpkins Reunion | publisher= RollingStone.com | url= http://www.rollingstone.com/rockdaily/index.php/2007/04/06/exclusive-james-iha-speaks-out-regarding-his-involvement-in-pumpkins-reunion | accessdate= 2007-04-06]

Since the Pumpkins' breakup in 2000, Iha has pursued many projects. He continues to contribute to other artists' recordings, such as "Don't Be Sad" on Whiskeytown's "Pneumonia" released in 2001 and further guest appearances for bands Ivy and , with which he kept close friendship and appeared on virtually every release by both bands since 1997. of Ivy, and of both Ivy and Fountains, appeared on most songs James produced or wrote for other artists. Schlesinger first appeared on Iha's song on "The Bells" by .

James Iha made bigger news when he joined rock band in July 2003 in time for their "" club tour. He has since appeared on their 2004 album as well as contributed remixes of "Blue" and "Outsider". In 2003, he joined . The group released an EP "Plus Rien" in Sweden the same year and followed up with the album "La Ballade d'O" in 2005-2006 on the bands own label RushmoreRecordings playing live shows in Sweden summer of 2005.

More recently, Iha has collaborated on musical and fashion design projects in Japan. He collaborated and produced two tracks with Japanese musician Chara for her 2001 album "Madrigal". The tracks are called "Boku ni Utsushite" and "Skirt", the latter accompanied with music video featuring Iha as a hunter in a forest. With the help of longtime friend and manager , he started the clothing label Vapor in 2001, and recorded "Never Ever", his first solo song since Smashing Pumpkins demise for first runway of Vapor.

In 2001 James played live with and appeared on their album "" producing the song "Addicted" together with Schlesinger and contributing guitar playing.

In 2004, went on hiatus and James spent much of the year DJing exclusive parties in New York.

Iha recently appeared on the track "The Ballad of Bonnie and Clyde" from the tribute album to entitled "Monsieur Gainsbourg Revisited". Singer Kazu Makino (of ) duets with him. He also produced two tracks on the album "I love you (me either)" that featured singing and "L'Hotel" featuring singing.

In February 2006, a digital ep "In the Sun" produced by Iha featuring and was released. This ep was for the benefit of victims of . The song was featured on an episode of . [ [http://prod1.cmj.com/articles/display_article.php?id=9047297 CMJ News Story ] ] Also in collaboration with Michael Stipe, Iha played guitar at the Bring Em Back Home concert benefit on March 20th of 2006 in Nyc. [http://archive.salon.com/ent/audiofile/2006/03/22/bring_em_home/index.html]

On March 31st, 2006, Pitchfork Media reported that Iha will be featured on Norwegian pop singer Annie's follow-up to her highly successful debut, Anniemal, which will reportedly be out near the year's end. [ [http://www.pitchforkmedia.com/page/news/36127-annie-working-with-james-iha-alan-braxe-on-new-lp Pitchfork: Annie Working With James Iha, Alan Braxe on New LP ] ] Iha also remixed "Me Plus One", a track off of Anniemal. [ [http://www.mtv.com/news/articles/1526876/20060323/annie_1_.jhtml?headlines=true Annie Ready To Hit The Studio - News Story | Music, Celebrity, Artist News | MTV News ] ]

Released in October 2006, Goodbye EP features a remix by Iha. [http://phobos.apple.com/WebObjects/MZStore.woa/wa/viewAlbum?id=199363440&s=143441] Also in 2006, Iha teamed up with to co-produce America's comeback album, "Here & Now", and appeared on an album, collaborating on her renditions of traditional Irish and Scottish folk songs. In 2006 James Iha recorded a cover of "Judy Is a Punk" by for 30th anniversary of a Japanese clothing label . [ [http://www.spfc.org/songs-releases/discog.html?discog_id=229 spfc.org : discography : VARIOUS ARTISTS: 1976-2006 Beams 30th Anniversary ] ]

Iha appeared on stage with Swedish band , on the season finale of in April 2007.

Iha contributed guitar to the song "Seatbacks and Traytables", on 's 2007 album "". His former bandmate also contributed to that album.

Iha has confirmed that he is writing and recording songs for a second solo album. Fact|date=August 2008James and Fountains Of Wayne's Adam Schlesinger are to co-produce America's first album of original material in nine years, Here And Now. [ [http://www.blamo.org/newsarchive.php?id=2125 Siva - News Archive of Smashing Pumpkins, Billy Corgan, and Zwan Information ] ] has revealed that James will be making a guest appearance on his new record, scheduled for a winter 2008 release. [ [http://www2.kerrang.com/2008/05/manson_new_album_is_very_viole.html Kerrang! Manson: "New album is very violent" ] ]