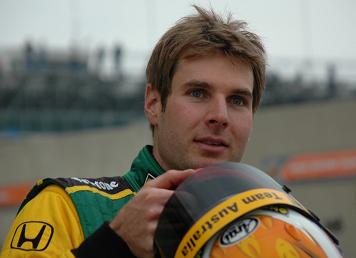 He tested a Formula One car in 2004 with fellow Australian in Italy.

During he competed in the for the team, where he proved very competitive. During the course of the WSR championship he scored 2 race victories, with 4 trips to the podium in total and qualified his car on the front row 5 times. In addition to driving in the WSR, Power was also one of the featured drivers for the Australian team in the 2005-06 series. Power raced in the series opener at and piloted Australia to a second place finish behind Team Brazil.

In late 2005 he joined at the event at in Australia, which also resulted in his departure from the World Series by Renault championship even though that season was still in progress and Power ultimately ended seventh in the championship. [ [http://www.speedsportmag.de/racing/statresults.php?sprache=en&back=formulanissan&sid=173 2005 Formula Renault 3.5 World Series Complete Qualifying and Race Results] SpeedSport Magazine] In the Indy 300 Power ran strongly until being knocked off the track by team mate . After the Surfers Paradise event he signed a multi year contract to race for the team, which began immediately at the next Champ Car round in after Tagliani's teammate was released for what was described as a "serious breach of contract".

Power drove full time for Team Australia in 2006. He performed well throughout the season with nine top ten finishes and strong qualifying results. At Mexico, the final round of the season, Power took his first podium finish in Champ Car. He won the "rookie of the year" award [ [http://www.champcarworldseries.com/Results/Awards.asp 2006 Roshfrans Rookie Of The Year Standings] Champ Car World Series] and finished in 6th place in the championship standings.

In his home race in 2006, at Surfers Paradise in Australia, he scored his first pole position of his career in Champ Cars, in front of his home crowd. However, contact from in pit lane and then an ambitious overtaking move by resulted in a bent left steering arm, and he fell to the back, one lap down by the time the car was repaired, eventually finishing 12th. [cite press release |url=http://www.champcarworldseries.com/News/Article.asp?ID=11009 |title=CHAMP CAR WORLD SERIES PRESS CONFERENCE TRANSCRIPT WITH 2006 SERIES CHAMPION SEBASTIEN BOURDAIS |date=, |accessdate=2006-10-22 |publisher=]

On 8 April 2007, Power won his first Champ Car race at the inaugural Las Vegas Grand Prix, held in the streets of Las Vegas. He qualified on pole position and led most laps, becoming the first Australian driver to win in the series. On July 8th, at the Steelback Grand Prix of Toronto, with rain pouring down and visibility near zero when he got behind other cars, Will Power decided it was time to get aggressive. The Australian drove from fourth to first in 14 laps, finally splashing past rookie Ryan Dalziel to take the lead with 23 minutes to go, and went on to an easy victory.

To get to the lead, Power also had to pass three-time Champ Car World Series champion Sebastien Bourdais and rookie Neel Jani. Thanks to a series of late caution flags, he was able to go after each of them in turn. "I was close behind Sebastien and I knew he was quite tentative in the wet and I attacked him," Power said. "I got him on a restart. Then the next restart, I got Neel and the next restart, I got Dalziel. It's just about being aggressive at the right time and not hitting anyone". "I just drove so hard here because we've just had so much bad luck in the last few races," said Power, whose first Champ Car victory came in the 2007 opener in Las Vegas. "I didn't care; I just went hard. The car was good in the wet. It was good in the dry, and we stuck it to them." Power had podium finishes at Long Beach, Mont-Tremblant and Mexico City and pole positions at Houston, Edmonton, Surfers Paradise and Mexico City to place fourth in the final point standings in 2007.

The merger of Champ Car and the IRL left his future uncertain. Unrelated to this, his Walker Racing team announced they would not be making the switch from Champ Car to IRL due to lack of sponsorship. [ [http://sportsillustrated.cnn.com/2008/racing/wires/03/09/3010.ap.car.irl.open.wheel.merger.walker.1st.ld.writethru.0225/ Walker Racing won't be making switch from Champ Car to IndyCar Series] , Associated Press, March 9, 2008] . However, Power later signed with KV Racing Technology, to drive the No. 8 Aussie Vineyards -- Team Australia car in 2008, continuing to work with Team Australia boss [ [http://www.indycar.com/news/story.php?story_id=10666/Servia, Power join KV Racing Technology in series] , Indycar.com, March 12, 2008] .