Medical physics is the application of physics to medicine. It generally concerns physics as applied to medical imaging and radiotherapy, although a medical physicist may also work in many other areas of healthcare. A medical physics department may be based in either a hospital or a university and its work is likely to include research, development, and clinical healthcare.

Of the large body of medical physicists in academia and clinics, roughly 85% practice or specialize in various forms of therapy, 10% in diagnostic imaging, and 5% in nuclear medicine.[1] Areas of specialty in medical physics however are widely varied in scope and breadth.

Para-sagittal MRI of the head in a patient with benign familial macrocephaly.

Used to monitor and measure various physiological parameters. Many physiological measurement techniques are non-invasive and can be used in conjunction with, or as an alternative to, other invasive methods. 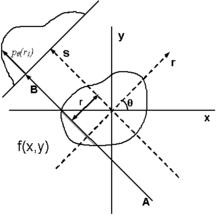 In North America,[2] medical physics training is offered at the bachelor's, master's, doctorate, post-doctorate and/or residency levels. Several universities offer these degrees in Canada and the United States.

As of October 2010, twenty-seven universities in North America have medical physics graduate programs that are accredited by The Commission on Accreditation of Medical Physics Education Programs (CAMPEP).[3] The same organization has accredited forty-three medical physics clinical residency programs.[3]

The person concerned must first gain a first or upper second-class honours degree in a physical or engineering science subject before they can start the Part I medical physics training within the National Health Service.[5][6]

Trainees can complete Part I training in fifteen months provided they hold an MSc from an IPEM accredited center in the United Kingdom or the Republic of Ireland (National University of Ireland, Galway). For these candidates, the Part I training consists of pure clinical experience. Trainees applying for Part I trainee holding only a degree in a engineering or physical science subject must undertake a combined study and clinical training programme. This programme consists of two years of clinical placement, during which the trainee will study for an MSc in Medical Physics which is approved by the Institute of Physics and Engineering in Medicine (IPEM). The MSc will be either at University College London, Swansea, Sheffield, Surrey, Birmingham, Leeds, Manchester, Aberdeen, Glasgow, King's or Queen Mary's. Open University also offers a Master of Science in Medical Physics, but the prospective student should first check that this degree will satisfy the accreditation requirements or that it is accepted before embarking on it. Successful completion of the Part I training programme leads to an IPEM Diploma. The trainee can then apply for a Part II position, which will consists of the IPEM's Part II training which takes a further two years and leads to Corporate Membership of the IPEM, and registration as a Clinical Scientist (if successful).

Note that some training centres offer a contract for the full four (three) years of the scheme, while some offer only part I training, with a requirement to reapply for part II.

As of October 2011, the scheme will be changing again as part of Modernising Scientific Careers.