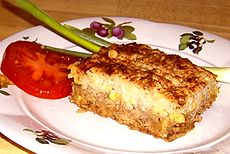 An example of cottage pie, made with minced beef

The term cottage pie is known to have been in use in 1791,[2][5][6] when the potato was being introduced as an edible crop affordable for the poor (cf. "cottage" meaning a modest dwelling for rural workers).

In early cookery books, the dish was a means of using leftover roasted meat of any kind, and the pie dish was lined with mashed potato as well as having a mashed potato crust on top.[7][8]