The Donegal County Board of the Gaelic Athletic Association (GAA) (Irish: Cumann Lúthchleas Gael Coiste Dhún na nGall) or Donegal GAA is one of the 32 county boards of the GAA in Ireland, and is responsible for Gaelic games in County Donegal. The county board is also responsible for the Donegal inter-county teams.

Gaelic football is strongest in the North-East of Donegal, and in the Inishowen area. The South-West and South having more of a soccer tradition. 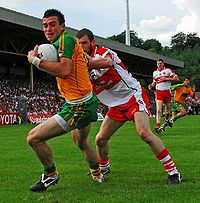 Donegal won its first Ulster championship in 1972. This was the year the county earned it's first All Star in the form of Brian McEniff. A second provincial title followed in 1974. The county won a third provincial title in 1983, this was followed in 1987 by under-21 All Ireland success which provided the basis for the success of the 1990 Ulster Football Final win over Armagh. They would win the Ulster Final again in 1992. Donegal's greatest footballing accomplishment to date came on September 20, 1992 when they won the All-Ireland Senior Football Championship, beating Dublin in the final 0-18 to 0-14.

Brian McEniff was serving in his second spell as Donegal manager in 1992 when he directed Donegal to the Sam Maguire cup. Man of the match Manus Boyle scored 0-9 (four from play), Gary Walsh had a great save from Vinny Murphy at the end. Donegal contested five successive Ulster finals (1989-1993). They then proceeded to contest the Natiional Football League final three times (1993 v Dublin, 1995 v Derry, 1996 v Derry) in a four year period without success.

The county would remain without a trophy for 15 years. They contested the 1993 and 1998 Ulster Finals, but lost to Derry on both occasions. Defeat to Armagh in the same contest in 2002, 2004 and 2006 meant another decade without a championship trophy. They contested the 2006 Division 2 Final, but lost to Louth. However, in 2007, for the first time in the history of the county, the senior football team won the National League title. Donegal overcame Mayo at Croke Park on Sunday April 22, 2007 with a score line of 0-13 to 0-10. On-route to the final Donegal defeated Cork, Mayo, Tyrone, Dublin, Kerry, Fermanagh and Kildare while drawing with Limerick.

In 2010, after a disappointing Championship, in which Donegal lost at home to Down AET, and lost to Armagh in Crossmaglen by 9 points in the first round of the Qualifiers, John Joe Doherty resigned from his post as the County's Senior Football Manager. The only candidate to replace him was Jim McGuinness . He was appointed on 26 July 2010.[1]. McGuinness brought Kevin Cassidy and Michael Hegarty out of retirement; introduced many players from the U-21 side he brought to the All Ireland final in 2010; and introduced structure and discipline, something that many observers claimed that many talented Donegal teams between 1993 and 2011 lacked.

McGuinness' fist major success as senior manager was to win the National Football League Division 2[2] when they beat Laois in Croke Park 2-11 to 0-16 points. They went through this League unbeaten, except for the last league match proper, when they lost to Laois[3]. Before the Division 2 Final, they had topped the Division 2 league and were guaranteed promotion with 4 Wins, 2 Draws, and 1 Loss.[4]

After this victory, expectations for the county were high, with many pundits predicting that Donegal would win the Ulster Championship[5]. Donegal beat Antrim 1-10 to 0-07[6] in the preliminary round. This was the teams first Championship win in since 2007. This set up an away match to Cavan in whici Donegal once again were the victors with a scoreline of 2-14 to 1-08 </ref>. Donegal beat Antrim 1-10 to 0-07[7]. A more ominous test against Tyrone would follow this Cavan victory. The new defensive system developed by Jim McGuinness would be put to the test against a Tyrone team which perfected the blanket defense tactic on the way to three All Ireland Victories. Donegal fought their way to a 2-06 to a 0-09 win[8].

This set up an Ulster Final meeting against a heavily fancied Derry, which one week prior to Donegal's victory over Tyrone, put 3-14 past an Armagh team which had just overcome 2010 All Ireland Runners Up, Down[9].

On 17 July 2011, in Clones, Donegal played in their first Ulster final in five years and their sixth Ulster Final since 1992. In front of a crowd of 28,364 Donegal beat Derry 1-11 to 0-08 Points. This was only the third time in the history of the Ulster Football Championship that a team which played the preliminary round would win the Final. Armagh did it in 2005, and Cavan did it 66 years earlier. All the more impressive is that Donegal did not concede more than 9 scores per match on the way to the final and held Antrim, Tyrone and Derry to only 3 points each in the second halves of their respective matches. As at 22 July 2011, the county has the lowest average conceding rate in the country at 8.75 points per game[10]. On July 30th 2011 Donegal travelled to Croke Park in their first All Quarter final in two years to play Kildare.The game began in the first half as quite poor but the 2nd half proved to be more tense as sub Christy Toye scored the only goal of the game, However Kildare brought the game level to drag it to extra-time. As Donegal still looked to be behind two late points from Christy Toye before a long range kick from Kevin Cassidy sealed the Ulster champions in front deep into injury-time.Just as Kildare thought about forcing a replay the final whistle blew to guide Donegal to their first All Ireland Semi-final since 2003.[11].

(Squad who played Antrim the Ulster championship on May 15,2011)

The most successful manager in terms of the Championship was Brian McEniff. He managed Donegal to their one and only Sam Maguire triumph in 1992. He was also involved as either a Player or Manager in their first five Provincial Titles. McEniff's role in bringing the county success was pivotal. He won the county's first All Star as a footballer in 1972. He was also involved in the panel as a player in 1974 and as a manager in 1983 and, eventually, managed the county to the 1992 All-Ireland title which the won. They beat Dublin on a scoreline of 0-18 to 0-14.

Brian McIver was appointed as manager in 2006. He brought the team into Division 1, although they lost to Louth in a Division 2 Final reply. He would bring the county it's only National League Title in 2007, beating Mayo in the Final. After the Championship of 2007, McIver stood down from the position of manager, however, he was reinstated before the beginning of the 2008 Championship. In 2008, at a County Board meeting, a motion of No Confidence was tabled by St. Eunan's and Gaoith Dobhair to which McIver felt compelled to resign.[11].[12]

Declan Bonner and Charlie Mulgrew were then appointed as Joint Managers after John Joe Doherty rejected the opportunity to become manager.

However, Doherty entered negotiations before Bonner and Mulgrew were rubber stamped. He was later offered the job for a second time, which he accepted. Bonner and Mulgrew had contested that the procedure which led to the installing of John Joe Doherty as football manager in the county was flawed.

The duo's case was heard November 2008 but had taken 13 days of deliberation for the DRA to reach a verdict. John Joe Doherty from Naomh Columba was appointed manager at the November county board meeting.[13] John Joe Doherty resigned after a season-ending defeat to Armagh in June 2010.[14]

In July 2010 Jim McGuinness, the U-21 manager, was appointed as the new senior to succeed John Joe Doherty[15]. McGuinness guided the county's U21 side to the All-Ireland final in 2010. He was appointed on a 4 year term, with a review after 2 years. His first year in charge brought Donegal the National Football League Division 2 title, promotion to Division 1, the county's first championship win in 4 years, the county's first provincial title in 19 years, and made Donegal the third team in the history of the GAA to win a Provincial Title from the Preliminary Round.

There are several hurling clubs in Donegal, but there has been limited inter-county success bar 3 senior and 4 junior Ulster titles, the last senior win in 1932. Donegal has a residue of pre-GAA hurling. The Burt Hibernians brought Donegal the 1906 hurling Championship, defeating Antrim by 25 points to one. Burt later played in Derry. In 1923 Donegal fielded a team of three natives augmented with guards and customs officers from hurling counties to win their second Ulster hurling Championship. When they lined out for the semi-final, wearing blue jerseys against Limerick on a cold, miserable day in Croke Park, numbers were worn by the players for the first time to help the spectators to distinguish them. They trailed 5-4 to nil at half-time and lost 7-4 to 0-1.

Donegal competed in the Ulster senior championship from the 1930s, hosting Antrim in Letterkenny in 1945. They succeeded in fielding a league team in the 1980s, drawing on the groundwork at Loreto, Letterkenny which fielded successful colleges teams. The Pan Celtic games of 2006 rejuvenated camogie in Donegal and the county returned to competition in the Ulster junior championship in 2008.[16]