Alliance Boots GmbH is a leading international, pharmacy-led health and beauty group. It has two core business activities - pharmacy-led health and beauty retailing, and pharmaceutical wholesaling and distribution - and has a presence in more than 25 countries. It has revenue in excess of £23.3 billion[1] It was formed in 2006 through a merger of the listed British high street pharmacist Boots Group and the pan-European wholesale and retail pharmacy group Alliance UniChem. Alliance Boots was initially a British plc listed on the London Stock Exchange. In 2007 it was bought out in a private equity transaction. In 2008 the trading business was transferred to a Swiss GmbH, which is a wholly owned subsidiary of a British company, AB Acquisitions Holdings Limited, which is owned by the private equity firm Kohlberg Kravis Roberts (KKR) and the Italian businessman Stefano Pessina, who built Alliance UniChem and is now the executive chairman of Alliance Boots.

The Group's operations are mainly carried out under the Boots and Alliance Healthcare brands. Boots UK is the UK's leading pharmacy-led health and beauty retailer. Alliance Boots is also the largest pharmaceutical wholesaler in the UK through its Alliance Healthcare (Distribution) Ltd business.

Alliance Boots employs over 115,500 staff and operates more than 3,280 retail stores, around 3,180 of these have pharmacies. Alliance Boots' pharmaceutical wholesale division serves over 160,000 pharmacies, doctors, hospitals and health centres via over 370 depots.[1]

In October 2005 it was announced, after a short period of speculation amongst financial analysts, that Boots Group would merge with Alliance UniChem in a deal valuing both companies equally and said to be worth around £7 billion.[2]

The merger process completed without any major intervention from the Office of Fair Trading on Monday 31 July 2006, although 96 shops were sold to comply with a condition laid down by the OFT.

Despite the Office of Fair Trading not imposing any restrictive conditions on the deal, the merger only received final approval in February 2006 after the Competition Appeal Tribunal rejected rival firm Celesio's challenge to the deal. Celesio own the Lloyds Pharmacy Chain.

On the 25 April 2007, Alliance Boots was approached with a buy-out offer by New York City-based Private Equity firm Kohlberg Kravis Roberts in conjunction with Alliance Boots' then Executive Deputy Chairman, Stefano Pessina, for an estimated £12.4billion.[4] Alliance Boots was the first company on the FTSE 100 share index to be bought-out by a private equity firm. Almost 9 billion pounds was advanced by investment banks, including Deutsche Bank, Citigroup, J.P. Morgan, UniCredit, Barclays, Merrill Lynch, the Bank of America and the Royal Bank of Scotland. Simultaneously the banks, as so-called "equity underwriters“, together invested around 1.4 billion pounds in the buyout company.

On 31 March 2008 Alliance Boots GmbH, of Zug, Switzerland, acquired the trading business from AB Acquisitions Holdings Limited (KKR and Pessina's acquistition vehicle) in exchange for the issue of share capital, and became a subsidiary of that company.

Alliance Boots has been accused of locating its headquarters in Switzerland solely to reduce its tax liabilities in the United Kingdom. In January 2011 protests were held at a number of Boots stores, including its flagship London store, which was closed down by protestors. The protest group UK Uncut claimed that Alliance Boots' Switzerland headquarters consists only of a post office box and that its relocation has reduced its annual tax liability by £86 million. Alliance Boots said that its new headquarters will better reflect the international nature of its wider group.[5] 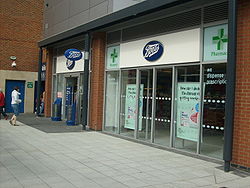 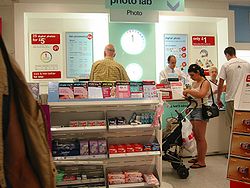 Interior of a Boots store

Boots UK forms the backbone of Alliance Boots retail operations in the United Kingdom. All the former Alliance Pharmacy stores have now been rebranded as Boots. The Boots brand has a history stretching back over 160 years and is a familiar sight on Britain's high streets.

Boots outlets are located in prominent high street/city centre locations as well as in local communities. Most branches have a pharmacy[1][not in citation given] and focus on healthcare, personal care and cosmetic products, with most stores selling over the counter medicines. Many stores also feature traditional photo processing and/or a Kodak picture kiosk where users of digital cameras and camera phones can create prints. Larger stores usually offer a range of electrical equipment such as hairdryers, curlers and foot massagers, whilst selected stores offer a range of sandwiches, baguettes, wraps, salads and beverages.

Boots has an internet site, www.boots.com, which allows online shopping in the United Kingdom.[6]

The company bills the Boots Advantage Card as the most generous customer loyalty card in Britain and has stated that it has 16.8 million regular users.[7] Users earn 4 points (worth 1p each) for every £1 spent. (In Ireland, users earn 4c for every €1 spent).

Since 1936, there have been Boots stores outside the UK. Stores in countries as widely spread as New Zealand, Canada (see Pharma Plus) and France were all closed in the 1980s. A new roll-out started in 1997 with the Netherlands, Thailand, Taiwan and Japan but only Thailand survives, as an independent chain.

Much of the Irish chain was acquired by purchasing Hayes Conyngham Robinson in 1998,[8] although Boots had been present in Ireland prior to this. It has now 61 stores in the Republic.In July 2011, an investigation by Ireland's National Consumer Agency found Boots to be the most expensive pharmacy for prescription drugs.[9]

In 2008, Boots started opening pharmacies in Norway. Now they have about 120 outlets known as Boots Apotek. (The name means Boots Pharmacy.)

In other countries (including Kuwait, Hong Kong, Switzerland and the USA), Boots products are sold from instore 'implants' in department stores and other pharmacies. A new store has also opened in Dubai, United Arab Emirates and in Qatar.

In Europe, Alliance Boots claims to be the clear market leader in pharmacy with stores in the UK, Norway, the Republic of Ireland, The Netherlands, Italy and Russia. It also has pharmacies in Thailand and its associates and joint ventures operate pharmacies in Switzerland, China, Lithuania and Italy.[7]

Alliance Healthcare is the backbone of Alliance Boots wholesale and distribution service, with twice daily deliveries to around 5,700 pharmacy shops in the UK alone. Internationally, Alliance Healthcare supplies medicines, other healthcare products and related services to over 150,000 pharmacies, doctors, health centres and hospitals from over 360 distribution centres in 16 countries.[7]

In addition to the wholesale of medicines and other healthcare products, Alliance Healthcare provides services to pharmaceutical manufacturers who are increasingly changing and adapting their approaches to distribution, while at the same time outsourcing non-core activities. These services include pre-wholesale and contract logistics, direct deliveries to pharmacies, and specialised medicine delivery including related home healthcare.

In recent years it has entered the fast growing Russian and Chinese markets.

Almus is a brand of generic prescription drugs sold in five countries.

Almus is an umbrella brand for the wide range of lower cost generic medicines, which was initially launched in the UK in 2003. Alliance Boots has placed considerable emphasis on the design of the packaging in an attempt to reduce the number errors by the dispensing chemist and by the patient relating to incorrect dosage which can result in either a dangerous accidental overdose or an equally dangerous under dose. Almus has won numerous awards for the design of their packaging and documentation.[10]

BCM Limited is the manufacturing subsidiary of Alliance Boots and manufactures a range of own-brand and third-party medicines, and cosmetic product ranges such as No 7, Kangol, Toni & Guy, FCUK, Soltan and Botanics. Some are sold through Boots stores whilst others are sold through third party stores such as French Connection and Toni & Guy. BCM has facilities in the UK, Germany, France and Poland.

The Boots own brand range of products includes skincare, medicines, healthcare products and many more.

No7 was launched in 1935: it continues to launch products, including most recently No7 Protect & Perfect Intense Beauty Serum.

Soltan is one of the UK's biggest selling suncare ranges and is also available in France, Italy, Spain and Portugal.

Botanics was first launched in the UK in 1995. It is a range of skin, hair, bath and body products.

Alliance Boots also has associates and joint ventures in: