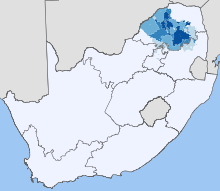 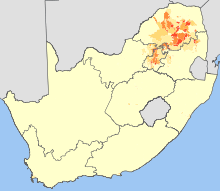 Northern Sotho (a heteroglottonym, as its autoglottonym among native speakers is Sesotho sa Leboa, as reflected by its United Nations definition), also inaccurately known by the name of a major dialect, Pedi or sePedi, is one of the official languages of South Africa, and is spoken by 4,208,980 people (2001 Census Data) — in the South African provinces of Gauteng, Limpopo Province and Mpumalanga.

Northern Sotho is a language of the Bantu family within the Niger–Congo language phylum. Northern Sotho is specifically found within the Sotho languages branch of Zone S (S.30). Thus, this language is most closely related to Tswana (Setswana), Lozi (siLozi), Kgalagari (sheKgalagari) and Sotho (Sesotho/Southern Sotho). It includes several dialects.

Northern Sotho is often, but erroneously, referred to as sePedi, since for some years after the new South African constitution appeared, Pedi (or sePedi) was the name used for Northern Sotho. There is thus some confusion as to which name to use.

The name "Pedi" is not, as some believe, synonymous with "Northern Sotho"; the official Northern Sotho language is intended to encompass approximately 30 closely related dialects, of which Pedi is but one. The name "Pedi" thus refers specifically to the language of the Pedi people, while Northern Sotho refers to the official language, which is a much broader category than merely Pedi. (Thus if speaking to a Pedi-speaker, it is not incorrect to say "Pedi", but if speaking about the official language, it is "Northern Sotho" or "Sesotho sa Leboa"). "Pedi" also refers to a ruling group which established its dominance over other groups in the eighteenth century, and to the culture and lifestyle of that group and of those over whom it ruled (see below).

Historically, the standard Northern Sotho language has been largely based on Pedi, as the missionaries who first developed the orthography had contact mainly with the Pedi people, and this is probably where the confusion originated. Further confusion arose when the South African constitution originally incorrectly cited "(se)Pedi" as being the official language. The Pan South African Language Board and the Northern Sotho National Lexicography Unit specifically endorse the names "Northern Sotho" or "Sesotho sa Leboa".

Very little published information is available on non-Pedi dialects of the Northern Sotho language. These include seLobedu, seTlokwa, seBirwa, Pai and sePulana. The morphological and perhaps lexical variation across dialects of Northern Sotho has led some to claim that 'Northern Sotho' is a typological holding category for simply all the Sotho-ish languages and dialects of northeastern South Africa. Whether there is a coherent linguistic or ethnic identity among speakers of this range of languages is a matter for further research.