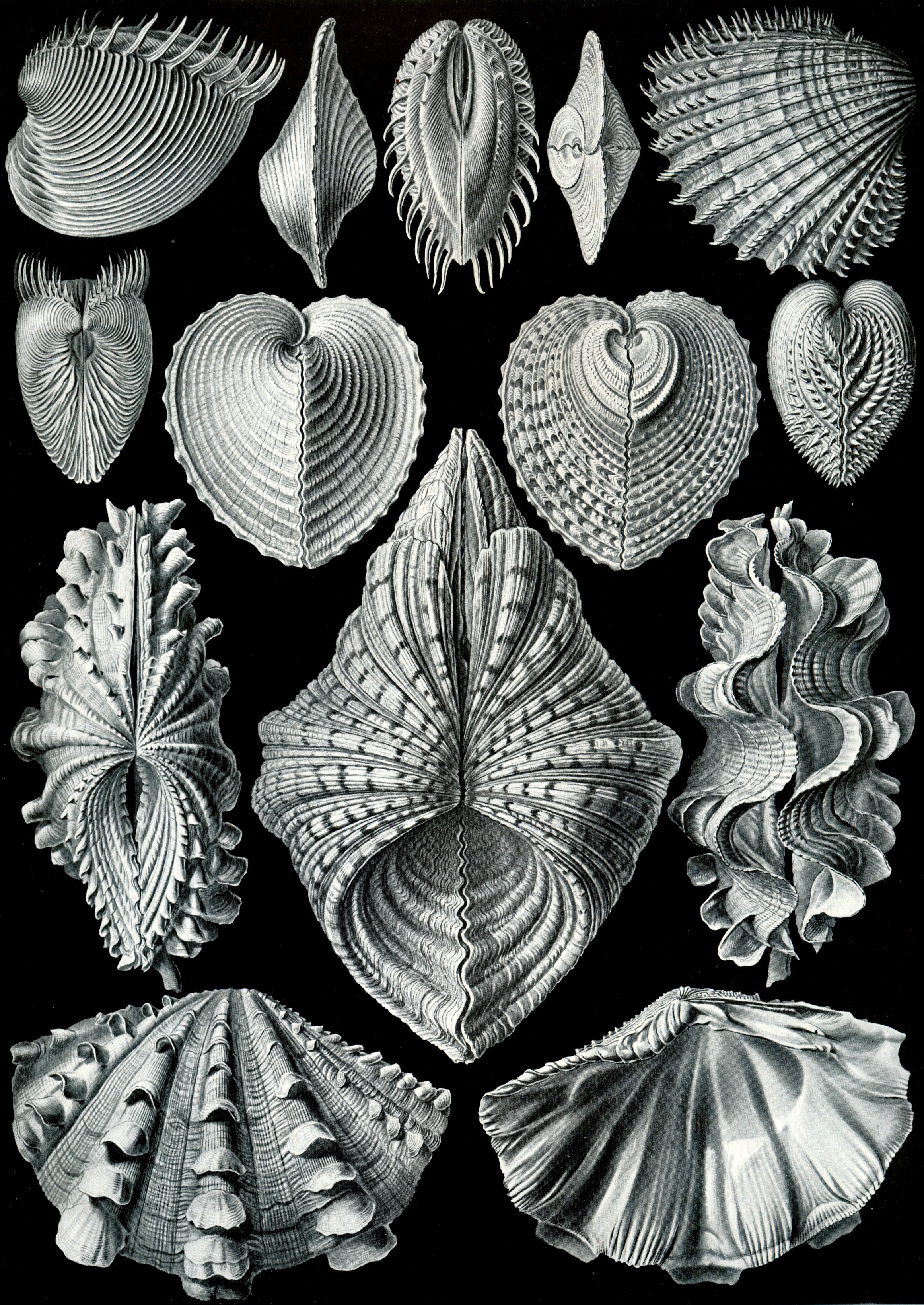 Bivalves are s belonging to the class Bivalvia. They have two-part shells, and typically both valves are symmetrical along the hinge line. The class has 30,000 , including s, s, s and s. Other names for the class include Bivalva, Pelecypoda, and Lamellibranchia.

Bivalves are exclusively aquatic; they include both marine and freshwater forms. However some, for instance the mussels, can survive out of water for short periods by closing their valves.

Bivalves are unique among the molluscs for lacking a ; they feed by siphoning and filtering large particles from water. Some bivalves are epifaunal: that is, they attach themselves to surfaces in the water, by means of a or organic cementation. Others are infaunal: they bury themselves in sand or other sediments; these forms typically have a strong digging foot. Some bivalves, such as s, can swim.

The systematic layout presented here is according to Newell's 1965 classification based on hinge teeth morphology. There exists no robust phylogeny, and due to the plethora of lineages, data is only of limited use should the es turn out to be . The of the Anomalodesmata is especially disputed, but this is of less consequence as that group does not include higher-level prehistoric . It is, however, currently accepted that Anomalodesmata resides within the subclass Heterodonta. [cite journal
journal=Invertebrate Biology
pages=271–324
title=On bivalve phylogeny: a high-level analysis of the Bivalvia (Mollusca) based on combined morphology and DNA sequence data
last=Giribet
first=Gonzalo
coauthors=Ward Wheeler
volume=121
issue=4
date=2002
doi=10.1111/j.1744-7410.2002.tb00132.x] [cite journal
journal=Zoologica Scripta
pages=587–606
title=A molecular phylogeny of heterodont bivalves (Mollusca: Bivalvia: Heterodonta): new analyses of 18S and 28S rRNA genes
last=Taylor
first=John
coauthors=Suzanne Williams
volume=36
issue=6
date=2007
doi=10.1111/j.1463-6409.2007.00299.x] [cite journal
journal=Zoological Journal of the Linnean Society
pages=395-420
title=Reconstructing the Anomalodesmata (Mollusca:Bivalvia): morphology and molecules
last=Harper
first=Elizabeth
coauthors=Hermann Dreyer and Gerhard Steiner
volume=148
issue=3
date=2006
doi=10.1111/j.1096-3642.2006.00260.x]

There also exists an alternative systematic scheme according to morphology (Franc 1960). This distinguishes between , , and . The first corresponds to Newell's Palaeotaxodonta + Cryptodonta, the second to his Pteriomorphia, and the last contains all other groups. In addition, Franc separated the from his eulamellibranchs, but this would seem to make the latter paraphyletic.

The shapes of bivalve shells vary greatly - some are rounded and globular, others are flattened and plate-like, while still others, have become greatly elongated in order to aid burrowing. The s of the family Teredinidae have greatly elongated bodies, but the shell valves are much reduced and restricted to the anterior end of the body, where they function as burrowing organs, allowing the animal to dig tunnels through wood. ["Description" in [http://64.233.183.104/search?q=cache:OyzesLnucFUJ:www.marine.csiro.au/crimp/nimpis/spSummaryPDF.asp%3Ftxa%3D10036+teredo+burrowing&hl=en&ct=clnk&cd=3] ]

The sedentary habit of the bivalves has led to the development of a simpler than in other molluscs - so simple, in fact, that there is no . In all but the simplest forms the neural are united into two cerebropleural ganglia either side of the . The pedal ganglia, controlling the foot, are at its base, and the visceral ganglia (which can be quite large in swimming bivalves) under the posterior adductor muscle.

The sensory organs of bivalves are not well developed, and are largely a function of the posterior mantle margins. The organs are usually tentacles and most are typically s and s.

s have complex eyes with a lens and , but most other bivalves have much simpler eyes, if any. There are also light-sensitive cells in all bivalves, that can detect shadows falling on the animal.

In the s the inhalant siphon is surrounded by vibration-sensitive tentacles for detecting prey. [In [http://adsabs.harvard.edu/abs/1981RSPTB.294..413A "an analysis of the evolution of the septibranch condition"] ]

s within the organism help the bivalve to sense its orientation, which can then be corrected if need be. ["a statocyst..." in [http://www.manandmollusc.net/advanced_introduction/moll101pelecypoda.html] ]

The muscular system is comprised of the posterior and anterior , although the anterior may be reduced or even lost in some species.

The paired anterior and posterior pedal retractor muscles operate the animal's . In some bivalves, such as s and s, these retractors are absent.

Bivalves have an open that bathes the organs in .

In bivalves the mantle, a thin surrounding the body, secretes the main shell valves, and hinge teeth, the mantle lobes secreting the valves and the mantle crest the other parts. The mantle is attached to the shell by the mantle retractor muscles at the . In some bivalves the mantle edges fuse to form s, which take in and expel water for purposes.

The shell halves are held together at the animal's dorsum by the , which is composed of the tensilium and resilium. The ligament opens the shells.

The sexes are usually separate, but some is known. Bivalves practice .

Typically the marine bivalve will start life as a , later becoming a . Freshwater bivalves have a different life cycle: they become a , which attaches to any firm surface to avoid the danger of being swept downsteam. Glochidia can become serious s of .

The radical structure of the bivalves affects their behaviour in several ways. the most significant is the use of the closely-fitting valves as a defence against predation and, in intertidal species such as mussels, drying out. The entire animal can be contained within the shell, which is held shut by the powerful adductor muscles. This defence is difficult to overcome except by specialist predators such as the and .

Most bivalves are s (although some have taken up scavenging and predation), extracting organic matter from the sea in which they live. remove the waste material. Buried bivalves feed by extending a siphon to the surface (indicated by the presence of a , the size of which is proportional to the burrowing depth, and represented by their hinge teeth).

s ("" spp.) can dig themselves into the sand with great speed to escape predation. Scallops can swim to escape an enemy, clapping their valves together to create a jet of water. Cockles can use their foot to leap from danger. However these methods can quickly exhaust the animal. In the razor shells the siphons can break off only to grow back later.

The s () can produce a noxious secretion when threatened, and the s of the same family have a unique, acid-producing organ.

Bivalves are laterally combined and have a shell composed of two valves. The valved shell makes them superficially similar to s, but the construction of the shell is completely different in the two groups: in brachiopods, the two valves are on the upper and lower surfaces of the body, while in bivalves, they are on the left and right sides.

Bivalves appeared late in the and came to dominate over s during the ; indeed, by the end-Permian extinction, bivalves were undergoing a huge radiation in numbers while brachiopods (along with around 95% of all species) were devastated.

It had long been considered that bivalves are better adapted to aquatic life than the brachiopods were, causing brachiopods to be out-competed and relegated to minor niches in later fossil strata. In fact, these taxa even appeared in textbooks as an example of replacement by competition. Evidence adduced for this included use of an energetically-efficient ligament-muscle system for opening valves, requiring less food to subsist. Lately, however, this interpretation of the interaction between brachiopods and bivalves has been largely exploded. It seems instead that the reason for the prominence of bivalves over brachiopods has to do with chance disparities in their response to extinction events. [cite journal
journal=Paleobiology
pages=383–396
title=Clams and Brachiopods-Ships that Pass in the Night
last=Gould
first=Stephen
authorlink=Stephen Jay Gould
coauthors=C. Bradford Calloway
volume=6
issue=4
date=Autumn, 1980
url=http://www.jstor.org/pss/2400538]