The Rules of the Game

The Rules of the Game

Infobox Film
name =The Rules of the Game 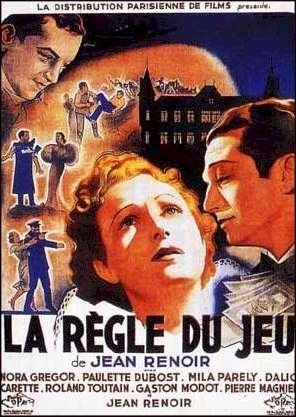 "The Rules of the Game" (original French title: "La Règle du jeu") is a 1939 directed by about upper-class French society just before the start of . Renoir's film is in part an adaptation of Alfred de Musset's "", a popular 19th-century , and is now widely regarded to be Renoir's greatest film, and among the greatest works of cinema ever.

The film is an ensemble that turns into a in the final act. It is characterized by thematic elements common to much of Renoir's work, such as the exhibited by its characters and an abhorrence of senseless death.

The film begins with the aviator André Jurieux landing at just outside , . He is greeted by his friend, Octave, who reveals that Christine, the woman André loves, has not come to the airfield to greet him. André is heartbroken. When a radio reporter comes to broadcast his first words upon landing, he explains his sorrow and denounces the woman who has spurned him.

Christine, an Austrian, is listening to the broadcast from her apartment in Paris as she is attended by her maid, Lisette. Christine has been married to Robert de la Chesnaye for three years. Lisette has been married to Schumacher, the at the country estate, for two years, but she is more devoted to Madame Christine. Christine's past relationship with André is openly known by her husband, her maid, and their friend Octave. After Christine and Robert playfully discuss André's emotional display and pledge devotion to one another, Robert excuses himself to make a phone call. He arranges to meet Geneviève, his mistress, the next morning.

At Geneviève's apartment, Robert announces he must end their relationship, but invites her to join them for a weekend retreat to Robert and Christine's country estate, La Colinière, in . Later, Octave induces Robert to invite André to the country as well. They joke that André and Geneviève will pair off and solve everyone's problems.

At the estate, Schumacher is policing the grounds, trying to get rid of rabbits. Marceau, a poacher, sneaks onto the grounds to retrieve a rabbit caught in one of his snares. Before he can get away, Schumacher catches him and begins to march him off the property when Robert demands to know what is going on. Marceau explains that he can catch rabbits, and Robert offers him a job as a servant. Once inside the house, Marceau flirts with Schumacher's wife, Lisette.

At a masquerade ball, various romantic liaisons are made. In the estate's dark, secluded greenhouse, Octave declares that he, too, loves Christine and they impulsively decide to run away together. Schumacher and Marceau, who have both been expelled from the estate, observe the greenhouse scene and mistake Christine for Schumacher's wife, Lisette, because Christine is wearing Lisette's cape and hood. Octave momentarily returns to the house and, while there, Lisette talks him out of running off with Christine. Consequently, he sends André to meet Christine. When André reaches the greenhouse, Schumacher mistakes him for Octave, who he believes is going to steal his wife. He shoots and kills André, which Robert subsequently explains to his guests as an "accident".

The film was initially condemned for its satire on the French upper classes and was greeted with derision by a ian crowd on its première. The upper class is depicted in this film as capricious and self-indulgent, with little regard for the consequences of their actions. The French government banned it, [John Kobal, "John Kobal Presents the Top 100 Films". New York: New American Library (1988): 11. "The chauvinistic French public hated the thought of French aristocrats with Jewish parents and German wives. ... Attempts were made to burn down the cinema where it was screened, and it was finally banned. The Nazis maintained the ban."] but after the War it has come to be seen by many and directors as one of the greatest films of all time. [(Kobal, 1988): 10 - 11. Kobal's list, culled from lists by more than eighty critics, places this film at No. 2, after "Citizen Kane".] Critics placing it at the top of their lists include Nick Roddick, [(Kobal, 1988): 141] and . [(Kobal, 1988): 143]

"The Rules of the Game" is noted for its use of so that events going on in the background are as important as those in the foreground.

In a 1954 interview with and , reprinted in "Jean Renoir: Interviews", Renoir said "Working on the script inspired me to make a break and perhaps get away from naturalism completely, to try to touch on a more classical, more poetic genre." He admitted that he wrote and rewrote it several times, often abandoning his original intentions altogether upon interaction with the actors having witnessed reactions that he hadn't foreseen. As a director he sought to "get closer to the way in which characters can adapt to their theories in real life while being subjected to life’s many obstacles that keep us from being theoretical and from remaining theoretical". Fact|date=February 2007

The film's style has had an impact on numerous filmmakers. One example is , whose "" copies many of "Rules of the Game"'s plot elements (a story of aristocrats in the country, aristocrats and their servants, murder) and pays homage with a direct reference to the infamous hunting scene.