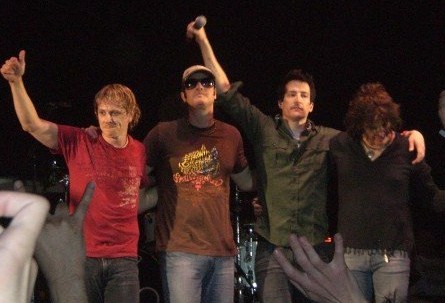 Army of Anyone was a supergroup formed by Filter frontman with two of the former members of rock band . In addition to Patrick on vocals, the band featured and on guitars and bass, respectively, and (formerly of 's band) on drums. This was the first band the DeLeo brothers formed without since the short-lived Talk Show project in and was their first major project since STP's breakup in 2003.

While writing material for a fourth Filter album, linked up with the DeLeo brothers for help. The result of their meeting was a track called "A Better Place". A few days later, they decided to form a new band. was called to audition after the DeLeo brothers were impressed with Ray's sound check at a show. Luzier joined the band later after a successful auditioning. The band had recorded more than 30 songs in Patrick's home studio, 11 of which would make their way on to their debut album, which was originally slated for an early 2006 release.

Army of Anyone originally signed with to release their debut album but most of the personnel who backed them at Columbia Records were fired, making them opt to change their label [http://www.empyrelounge.com/podcast/2006/112206_armyofanyone/112206_armyofanyone.mp3] .

In a message posted by Luzier on his official message board, he stated the album would be released in . It was finally released on . The album was produced by , the producer behind 's epic "" and 's early hits. Patrick commented that the delays were caused by a few personal reasons such as members getting married and having children. During that time, they opted to re-mix and re-master the record.

The band's first single was titled "Goodbye," which can be found on the band's [http://www.myspace.com/armyofanyone Myspace page] . For a brief period of time, an instrumental track called "Used to Know Her" was also available on the page, but has since been removed. "Goodbye" made its video debut on Yahoo Music, on , .

While promoting their debut album, Army of Anyone visited radio stations across the country from late September. Among the songs they played at these stations were covers of Filter's "Take a Picture" and ' "". Since the release of their first album on November 14th, the band has gone out on tour to further promote the album. In addition to playing songs from the album, they also include covers of "", "", and "Piece of Pie" by Stone Temple Pilots as well as covers of Filter's "", "Take a Picture," and "Welcome to the Fold," as well an interlude version of 's "" as a part of their set.

An exclusive three-in-one was released on . The EP includes the single "Goodbye," the music video for the single, and a special podcast featuring interviews with all of the band members discussing the tracks on the CD.

The band headlined the 2007 edition of the Snocore Tour which has in the past been headlined by bands such as , , Helmet and . Army of Anyone were supported by Hurt throughout the tour.

On , , Richard Patrick was interviewed on the LunaticRadio.com show and announced that he was working on new Filter material. On , Army of Anyone played their last concert in El Paso, Texas.

Patrick subtly confirmed on Sirius' "" channel that the band has likely ended; after playing Stone Temple Pilots' "," he stated, "I was in a band with Dean and Rob," referring to Army of Anyone in the past tense.

Since the band parted ways, Patrick has recorded a new album with Filter, "", which was released in May 2008 featuring the single "."

Rumors began circulating in early 2008 that a Stone Temple Pilots reunion was imminent, and in April the band announced their reunion tour and performed a mini show in Los Angeles. STP are currently touring the United States and have plans to record a new album later this year.

Ray Luzier became 's newest drummer in November 2007. He has been touring with them since January 2008. Korn plans to record a new album in 2008 and Luzier will drum on the record.